An Osaka city bus operator has started allowing local companies and facilities to create bus stops at locations of their choice for a monthly fee of 22,000 yen ($160) in the western Japan city.

The new initiative of Osaka Metro Group is aimed at improving revenues for its existing "on-demand bus" service, which takes passengers to stations whenever requested, unlike usual bus services that must go on predetermined routes. 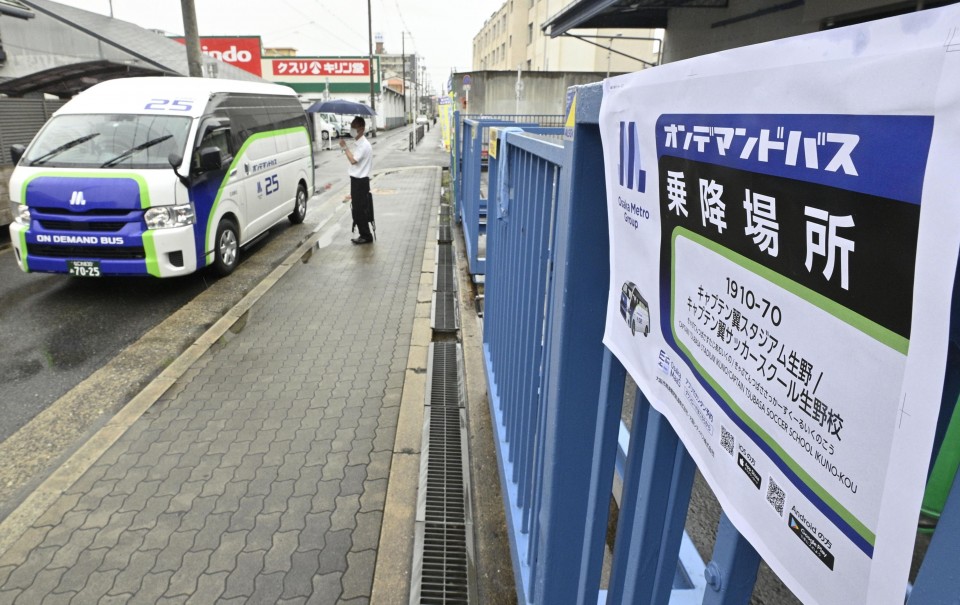 A stop for Osaka Metro Group's "on-demand bus" service is pictured in Osaka on July 5, 2022. (Kyodo)

On-demand buses operate only when reservations are received via a smartphone app or phone and run along shortest routes chosen by artificial intelligence to make stops within certain areas.

In early July, a man with an umbrella boarded a van operating as an on-demand bus in front of an indoor futsal field in Osaka's Ikuno Ward, after a new stop was set up by the facility's manager.

Minetaka Tajiri said he has decided to sign a contract to set up a stop thinking that people may use the bus to come to the place even on rainy or extremely hot days.

The service, first launched in 2021, runs through the city's Kita, Fukushima, Ikuno and Hirano wards, with more than 700 stops after new ones were added earlier this month.

Vans operating as on-demand buses carry up to five or eight passengers, with an adult ticket costing 210 or 300 yen per ride depending on locations. But fares were insufficient to cover operating expenses.

For companies and facilities to create new stops, the stops need to be approved by local residents and police, according to the bus operator.

The company has also started selling "naming rights" where people can name bus stops for a monthly fee of 11,000 yen, as it aims to make the on-demand bus service profitable.