In the aftermath of former Prime Minister Shinzo Abe's murder, his powerful faction in the governing Liberal Democratic Party is expected to operate under collective leadership.

While a battle for taking the leadership may occur in the future, the faction has chosen not to name a successor to Abe as chairman for now, to maintain its unity and avoid a possible breakup.

This is because faction members, totaling about 100 in both houses of parliament, have not reached a consensus on who should succeed Abe. The faction also has a history of conflicts and breakups. 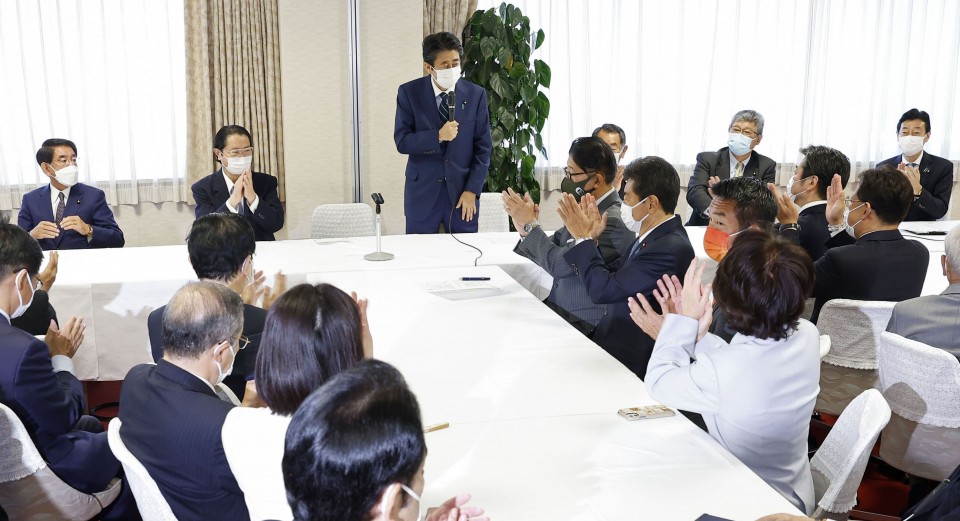 Kishida serves as president of the LDP and heads the fourth-largest intraparty faction.

In a meeting last Friday, a week after the fatal shooting of Abe, Ryu Shionoya and Hakubun Shimomura, acting chairmen of Seiwaken, affirmed that the leadership will, for the time being, remain intact, meaning that it will not choose Abe's successor for now.

Shionoya and Shimomura agreed that the faction will unite under the name the "Abe faction" because the current leadership was decided by Abe, the longest-serving prime minister of Japan.

After leaving office in 2020 for health reasons, Abe's health recovered, and he took up the faction's leadership last November.

A former Cabinet minister said on condition of anonymity that he sees a possible leadership change being a way off and that Abe appears to have set the stage for four potential successors to vie for the position.

Before his death on July 8, Abe had often cited Shimomura, Matsuno, Hagiuda and Yasutoshi Nishimura, a former minister for economic revitalization, as major candidates for a future Seiwaken leader.

Abe's father, the late Shintaro Abe, a former foreign minister, also named four lawmakers, including Yoshiro Mori, who served as prime minister from 2000 to 2001, as major candidates for a future faction leader.

Shinzo Abe was apparently concerned that handpicking one of the four candidates might lead to internal conflict.

In the wake of Abe's death, speculation has grown that seven senior lawmakers -- the four major candidates, plus Shionoya, Tsuyoshi Takagi, chairman of the LDP Diet Affairs Committee, and Hiroshige Seko, secretary general of the LDP in the House of Councillors -- are likely to play a joint role in the faction's leadership.

Speaking at a fundraising party for Seiwaken on May 17, Mori urged members to ensure unity in the faction.

"The most dangerous point is when the faction grows into a size of 100 members," he said. "Some people would develop a thirst for power, and such illusion would disassemble the faction."

Mori witnessed intra-faction moves that led to splits of Seiwaken.

After Shintaro Abe died in 1991, Hiroshi Mitsuzuka, a former finance minister, and Mutsuki Kato, a former minister of agriculture, forestry and fisheries, vied for leadership of the faction.

Kato ended up leaving the faction after Mitsuzuka took over the post from the senior Abe.

In 1998, Mori clashed with Shizuka Kamei, a former chairman of the LDP Policy Research Council, over the faction leadership.

Mori won the game and forced Kamei to exit the faction with other members.

In the 2012 LDP presidential election, Shinzo Abe and then Seiwaken leader Nobutaka Machimura both entered the race, fracturing the faction.

Soon after Abe's death, psychological warfare for the next faction leadership had already started.

On July 9, When Abe's body returned to his home in Tokyo, those in the political circle made condolence visits, and information swirled that Nishimura sat close to Abe's wife, Akie.

Nishimura, who respects Abe, had no special intentions. But one of the faction's heavyweights raised suspicion about his ambition, saying, "He is the one who started telling others to refrain from condolence visits," citing the privacy of the bereaved family.

Separately, Shimomura caused a stir after saying, "The prime minister (Kishida) is a liberal. If he disregards the Seiwa group, the LDP will lose conservative supporters."

Shimomura, speaking on a TV program on July 11, also urged Kishida to pay consideration to Seiwaken in an expected reshuffle of his Cabinet and LDP executives following the LDP's sweeping victory in the upper house election the day before.

Reacting to the comments, a senior Abe faction leader said in frustration, "When did he take up a position representing the faction?"