Japan, the United States and other nations condemned Myanmar in a joint statement released Tuesday in Tokyo after the military government announced the executions of four people, including two pro-democracy activists. 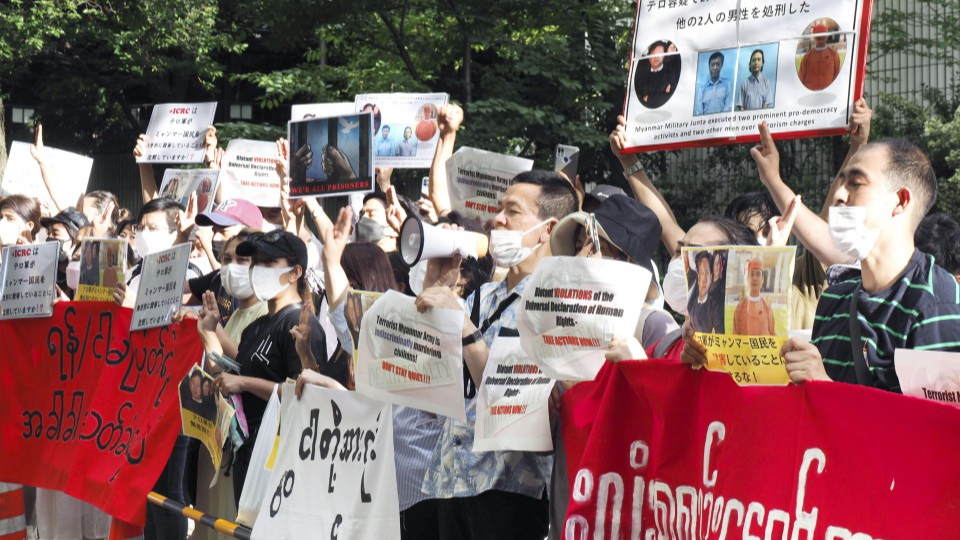 People from Myanmar living in Japan stage a protest against their country's military on July 25, 2022, in Tokyo. (Kyodo) ==Kyodo

"The Myanmar military regime's executions of pro-democracy and opposition leaders are reprehensible acts of violence that further exemplify the regime's disregard for human rights and the rule of law," said the statement by foreign ministers of the countries and the high representative of the European Union.

"We urge the regime to release all those unjustly detained, grant full and independent access to prisons," it said, while also calling on the regime to "end the use of violence, respect the will of the people, and restore the country's path toward democracy."

The nation's military tribunals sentenced the two pro-democracy activists to death in January for involvement in "terror acts" that included murder. The other two were reportedly implicated in the killing of a woman who was an alleged military informant.

There had been no executions of political prisoners in Myanmar since 1976 and the most recent instance of capital punishment occurred in 1990, according to local media.