The fatal shooting of former Prime Minister Shinzo Abe remained fresh on Japanese people's minds as they headed to the polls Sunday for the House of Councillors election, but it appeared to have no significant impact on voter turnout.

Abe's death at a campaign event generated enormous focus on the triennial election, putting politics front-of-mind for the voting public while averting attention from key issues such as cost of living pressures. 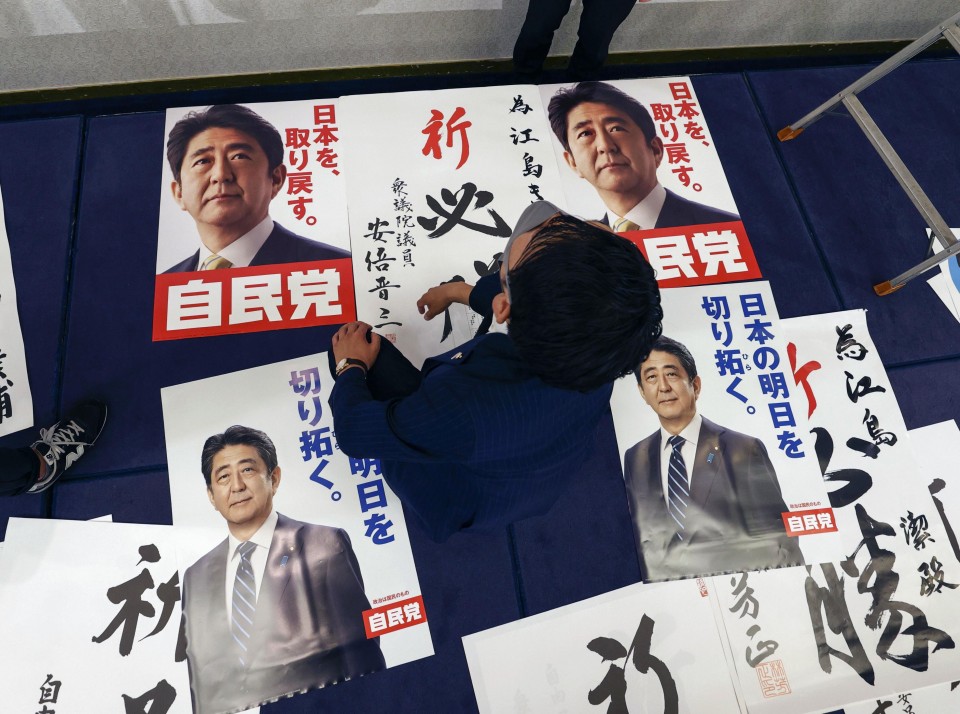 Posters of former Japanese Prime Minister Shinzo Abe are seen at an office of a ruling Liberal Democratic Party candidate in Yamaguchi, western Japan, during the House of Councillors election on July 10, 2022. Abe was shot dead during a stump speech two days before the election. (Kyodo) ==Kyodo

According to a Kyodo News estimate, however, the turnout rate stood at only 52.0 percent as of 1 a.m. The figure is just 3.2 percentage points higher than the second-lowest turnout of 48.8 percent recorded in 2019.

On Sunday, many people journeyed to pay their respects at the area in the western city of Nara near where Abe was assassinated, with mourners lining up to leave flowers.

"Mr. Abe was a politician who worked hard for Japan. It's regrettable," said Akihiro Yorimoto, a 43-year-old from Osaka who came with his family to place flowers.

Abe, Japan's longest-serving prime minister, was shot by a lone gunman while on the campaign trail in Nara two days before the upper house election, sending shockwaves through the Liberal Democratic Party, of which he was a longtime leader, the business and political community, and the public.

"I put my ballot paper in the box while imagining my vote would affect the future of Japan, and be a matter of life or death for someone," said Mio Inatani, a high school student in Toyama Prefecture, central Japan, who turned 18 in April and was voting for the first time.

Shoji Sugamoto, a former resident of Futaba, which co-hosts the crippled Fukushima Daiichi nuclear power plant, stressed that Abe's death should not discourage politicians from engaging with the community in person.

"Stump speeches are an opportunity to help people to decide who to vote for. Violence that takes away that opportunity and hurts people is unacceptable," said the 66-year-old.

Prime Minister Fumio Kishida, who heads the ruling LDP, has strongly condemned the shooting as a "barbaric act" that challenged "the foundations of democracy."

The LDP and its junior coalition partner Komeito increased their majority in the upper chamber of parliament after the election, although it is unclear to what extent Abe's death has contributed to their sweeping victory. 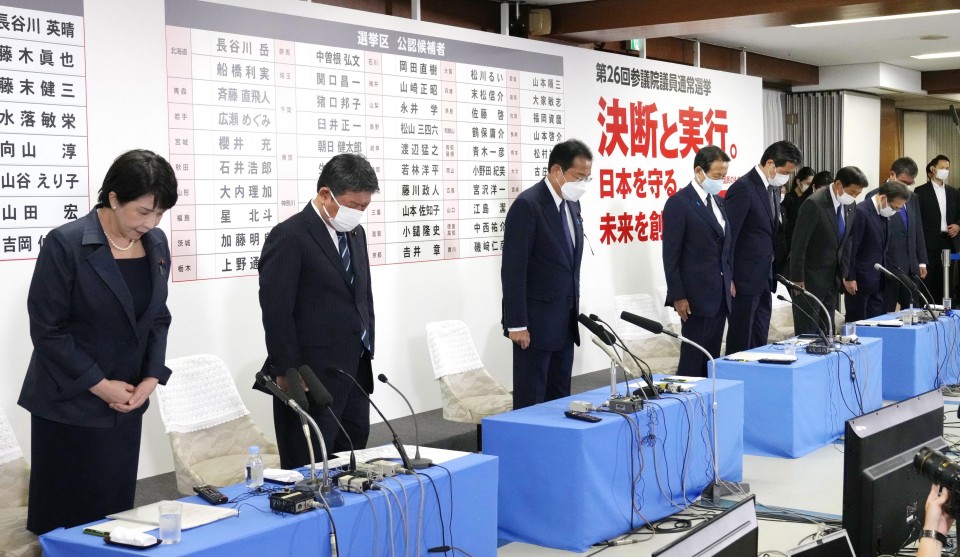 Japanese Prime Minister Fumio Kishida (3rd from L) and other executives of his Liberal Democratic Party observe a moment of silence in Tokyo for former Prime Minister Shinzo Abe, who was shot to death in Nara during election campaigning, on July 10, 2022, the day of the House of Councillors election. (Kyodo) ==Kyodo

With the death of Abe, the public "did not have the luxury" of putting the brakes on the ruling party, with many people "likely to have voted for the LDP out of sympathy," Kawakami said.

But rising prices and other pressing issues remained at the forefront of many voters' minds.

Mikiko Fujiya, 41, who runs a ramen restaurant in Sano, Tochigi Prefecture, said the rising cost of living and the coronavirus pandemic changed her attitude toward elections.

Fujiya was hit hard by the COVID-19 restrictions shortly after opening her eatery in January 2020, and with utility and raw material costs surging, she was forced to increase prices of noodle dishes by 100 yen ($0.73) this year.

"We would like to raise the wages of our employees, but it's tough right now. I want a government that supports early-stage companies and young people," Fujiya said.

Yoneko Fujita, who used to produce organic rice in Futaba but evacuated to Saitama Prefecture after the nuclear disaster, said she voted based on which party she believes has policies improving Japan's declining birthrate and education system.

"I hope to see a society where young people can live and raise children with peace of mind," the 81-year-old said.