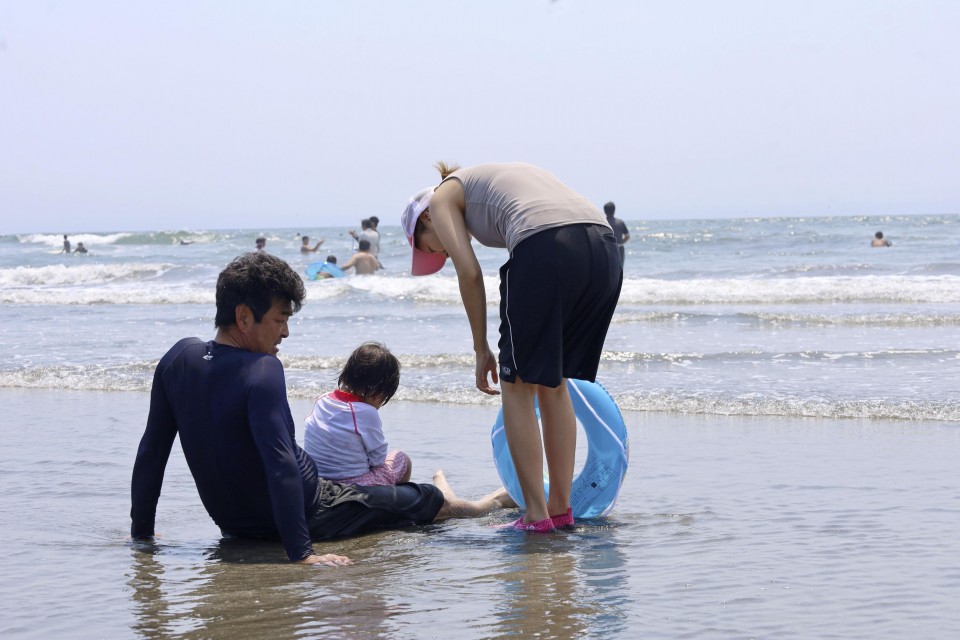 People play on a beach in the Chiba Prefecture town of Kujukuri, eastern Japan, on July 2, 2022, as hot temperatures continue in the region. (Kyodo) ==Kyodo

TOKYO - The price cap to be imposed on Russian oil to punish Moscow for its invasion of Ukraine is expected to be around half the current purchase price, Japanese Prime Minister Fumio Kishida said Sunday.

Referring to a joint communique released after a summit of the Group of Seven developed nations late last month, Kishida said during a stump speech in Tokyo that a mechanism would be designed so that Russian oil "will not and cannot be bought at a higher price" than the cap.

According to the Japan Meteorological Agency, the mercury hit 35.3 degrees in central Tokyo just after noon, breaking the previous record of eight straight days of high temperatures set in 2015 from July 31 through Aug. 7.

TOKYO - KDDI Corp., one of Japan's top three cellular carriers, said Sunday up to 39.15 million mobile connections had been affected by a nationwide network disruption that has continued for about 40 hours.

The "au" mobile brand operator was still working to fully restore its network, with its president, Makoto Takahashi, saying work to resume services in eastern Japan will likely end around 5:30 p.m.

TOKYO - A major multinational naval exercise led by the U.S. Navy has been launched in the Pacific with 25 other nations participating amid growing U.S.-China tensions.

U.S. allies in the Indo-Pacific region including Japan, South Korea, Australia, New Zealand and the Philippines are participating in the biennial Rim of the Pacific exercise, regarded as the world's biggest naval training starting from Wednesday, according to the U.S. Navy.

TOKYO - Keisei Tominaga dropped a game-high 17 points Sunday as Japan dominated Taiwan 89-49 in the opening round of Asian qualifying for the 2023 FIBA Basketball World Cup.

The 21-year-old guard for the University of Nebraska Omaha got into the teeth of the defense and was a perfect 5-from-5 from the stripe in his 15 minutes off the bench at Melbourne's John Cain Arena.

TOKYO - The World Baseball Softball Confederation will employ the "Ohtani rule" for its international tournaments, allowing starting pitchers to remain in games as designated hitter after leaving the mound, a source familiar with the matter said Sunday.

The rule, first used as a novelty at last year's MLB All-Star game, was made official this season when the designated hitter rule was extended to both of MLB's major leagues.