"We will put the system we have in place into full operation to move forward with social and economic activities," Kishida said in an interview with Kyodo News and Hiroshima-based Chugoku Shimbun.

But the Japanese government said the same day it has established a framework to enable prefectural governments to more freely issue requests to stem the spread of the BA.5 variant in their areas.

Under the policy, aimed at the elderly and those at high risk, prefectural governments facing strains on their medical systems can urge such residents to stay home and for members of the public to receive COVID-19 vaccinations, according to officials.

Daishiro Yamagiwa, minister in charge of economic revitalization and the coronavirus response, announced the policy at a press conference, saying the government will help local authorities "strike a balance between infection control and economic and social activities." 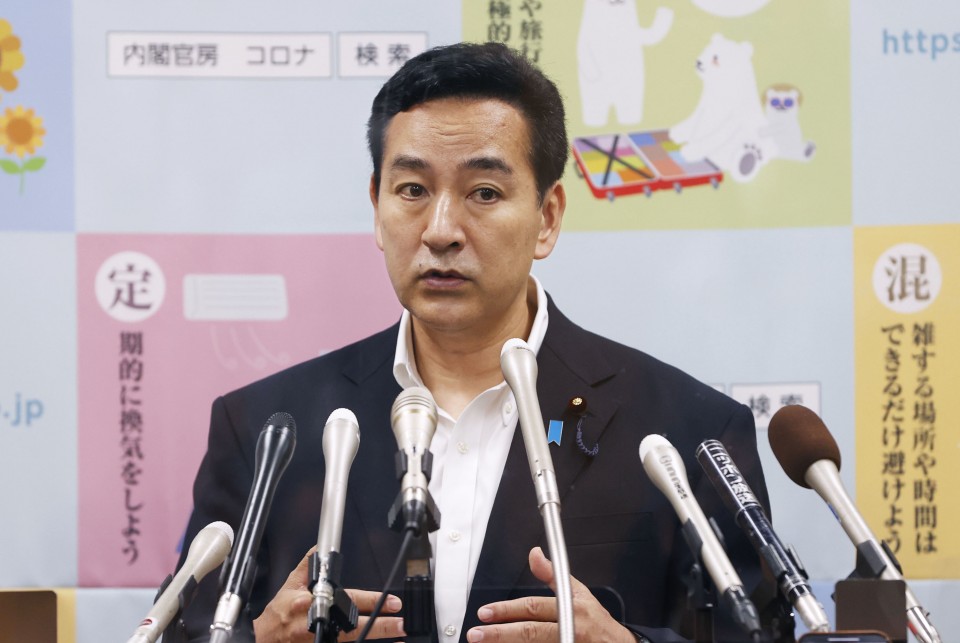 Daishiro Yamagiwa, minister in charge of economic revitalization and the coronavirus response, speaks at a press conference in Tokyo on July 29, 2022. (Kyodo)

The announcement came a day after Japan's daily cases topped 230,000, marking a new record for the second consecutive day, amid the seventh wave of the pandemic.

On Friday, the nationwide daily count stood at 221,443, with Tokyo reporting 36,814 new cases, down from an all-time high of 40,406 cases reported the previous day. The record number included around 5,000 to 6,000 cases from Wednesday that could not be logged due to a system error.

The capital's seven-day rolling average of new cases stood at 31,578 per day, up 49.7 percent from the previous week.

A team led by Akimasa Hirata, a professor at the Nagoya Institute of Technology, estimated that the current wave of infections would peak around Aug. 6 in Tokyo with a seven-day rolling average of around 39,000 people per day, more than double the previous wave's peak of over 18,000 per day.

"The reason for this is that, unlike last year, we are not seeing a decrease in the number of people out and about despite an increase in infections," Hirata said. "Cases may remain high as the vaccine's efficacy among the working-age population is declining."

Hirata's team, which assumed the BA.5 subvariant is 1.3 times more infectious than BA.2 and that the vaccines' efficacy against it is only 60 percent, used artificial intelligence to generate their estimates.

The resurgence is raising fears over renewed strain on the medical system as the number of available hospital beds for COVID patients continues to decline.

A tally by the Cabinet Secretariat as of Wednesday showed occupancy rates for designated hospital beds stood at over 50 percent -- a threshold indicating strain on the medical system -- in 19 of Japan's 47 prefectures.

Under the new policy, prefectural governments can also encourage companies to promote working from home, according to the officials.

The central government is expected to send its officials to prefectures that issue such declarations to see whether the precautionary measures are sufficient and give advice if necessary, they added.