Prime Minister Fumio Kishida said Sunday he will seek to add momentum to global efforts toward a world free of nuclear weapons amid Russia's war in Ukraine by attending a U.N. review conference on a nuclear nonproliferation treaty.

Kishida, who will become the first Japanese leader to participate in the conference, is expected to stress that nuclear weapons should not be used and call for nuclear powers to enhance transparency in their arsenal.

"The global momentum for realizing a world without nuclear weapons has been declining significantly. I intend to reverse this trend (by attending the conference)," Kishida told reporters at his official residence before departing for the conference in New York. 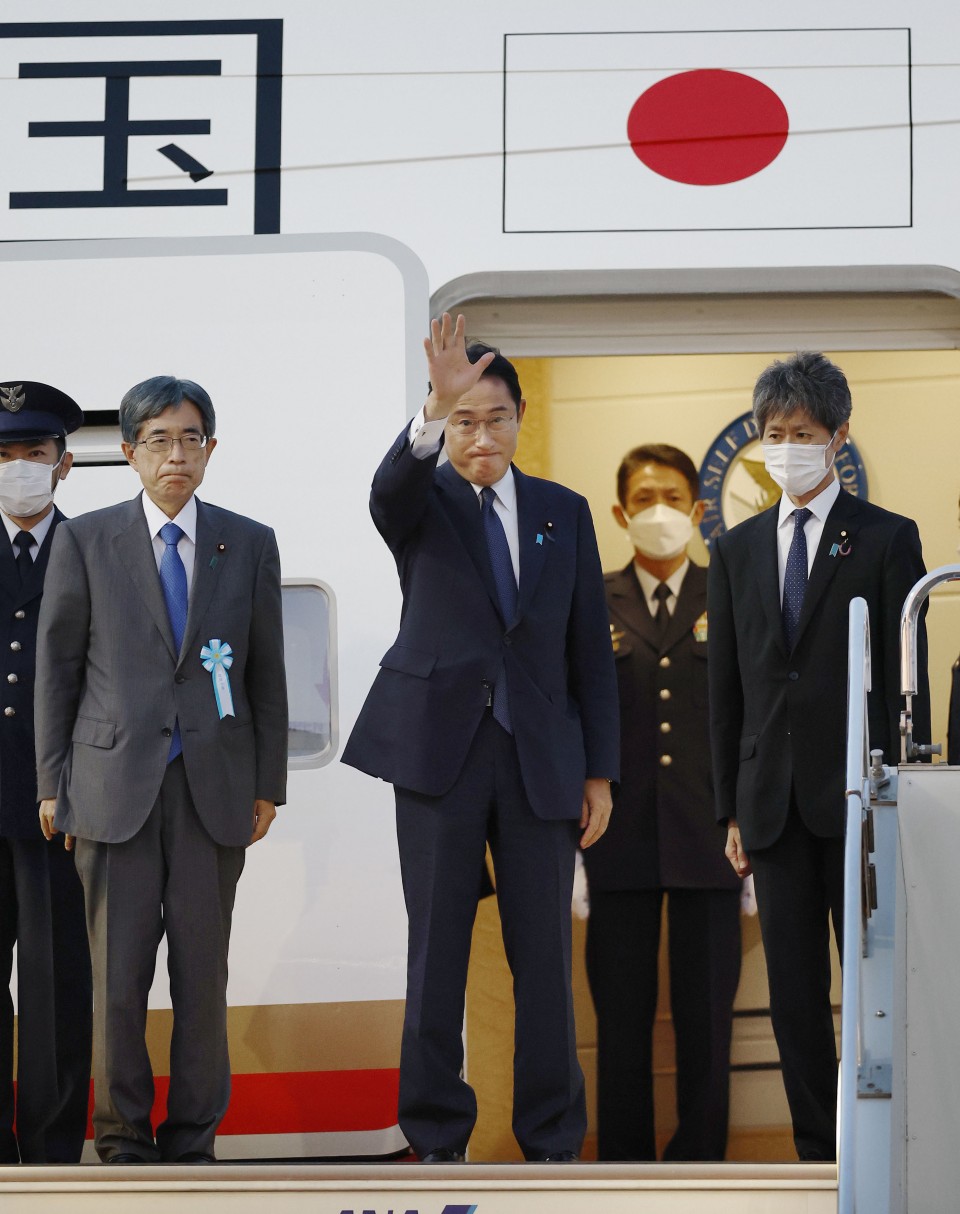 Japanese Prime Minister Fumio Kishida (C) waves at Tokyo's Haneda airport on July 31, 2022, before leaving for New York to attend the Aug. 1-26 review conference on the Treaty on the Non-Proliferation of Nuclear Weapons at which he will deliver a speech. (Kyodo) ==Kyodo

Elected from a constituency in Hiroshima, which along with Nagasaki was devastated by a U.S.-dropped atomic bomb in World War II, Kishida sees his vision for a nuclear-free world as a top priority.

And as leader of the only nation to have experienced the horrors of a nuclear attack, he is seeking to serve as a bridge between nuclear powers and non-nuclear states.

The upcoming meeting to review the operation of the Treaty on the Non-Proliferation of Nuclear Weapons comes after Russia's nuclear threat has raised alarm and its war in Ukraine shows little sign of ending.

The prime minister is expected to unveil a plan to set up a U.N. fund to help young people from around the world to visit the two Japanese cities and learn about their devastation as part of efforts toward a nuclear-free world, government sources have said.

During his visit to New York, Kishida plans to hold talks with U.N. Secretary General Antonio Guterres and participate in a foreign ministers' meeting of the 12-member Non-Proliferation and Disarmament Initiative, a framework involving non-nuclear states in the NPT treaty such as Japan, Australia, Canada, Germany, Turkey and the United Arab Emirates.

The previous NPT review conference held in 2015 ended without an outcome document due to disagreements among the participants. Kishida, who was foreign minister back then, said in an interview with Kyodo News on Friday that it would be "ideal" to have a document on which all nations can agree this time.

A review comes every five years and the latest round was scheduled for 2020 but was postponed due to the COVID-19 pandemic. The meeting runs from Monday to Aug. 26.