Japan made a strong start before fading in the second half of a 42-23 loss to France in Saturday's first test at a sweltering Toyota Stadium in Aichi Prefecture.

Center Yoram Moefana scored one try and set up another for the Six Nations champions, who showed why they will be among the favorites to lift the trophy when they host the 2023 Rugby World Cup. 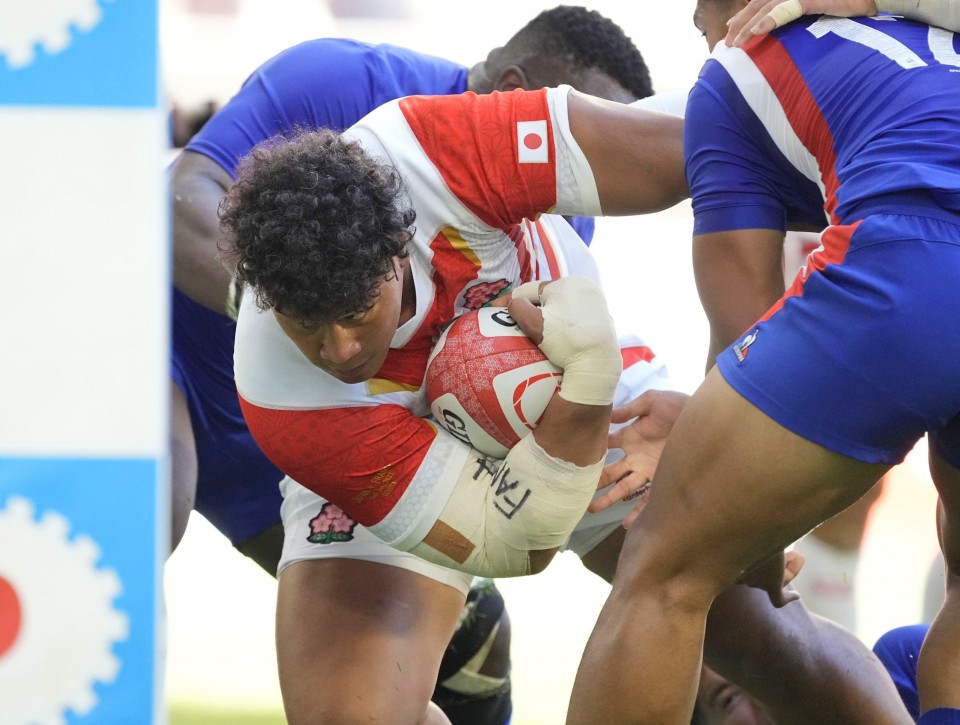 Japan's Tevita Tatafu scores a try during the first half of a rugby test match against France on July 2, 2022, at Toyota Stadium in the Aichi Prefecture city of Toyota, central Japan. (Kyodo)

The teams were deadlocked 13-13 at halftime, but the Brave Blossoms struggled to match the physicality of world No. 2 France as the game wore on.

"It's honestly frustrating," Japanese captain Atsushi Sakate said. "We made a lot of mistakes, but we also managed to play the style of rugby we intended."

"I want to keep preparing in the week ahead with the aim of winning (the second test)."

Coming off a 2-0 sweep of their test series against Uruguay, Jamie Joseph's world No. 10 team hit a hurdle before the match when several players were sidelined by COVID-19.

Fabien Galthie's side took just three minutes to run in their first try, with Damian Penaud going over in the corner after the tourists quickly spread wide from a scrum.

The hosts registered their first points in the sixth minute with a penalty from flyhalf Lee Seung Sin, making his first start after being brought into the team in place of Yamasawa.

Quick work at the breakdown led to Japan's first try in the 14th minute, with Tevita Tatafu bulldozing over between the posts before Lee added the extras for a 10-7 lead.

Lee traded penalties with French fullback Melvyn Jaminet, who let the Brave Blossoms off the hook when he blew what appeared to be a certain try ahead of halftime, sailing a pass intended for Moefana over the touchline.

The tourists led 20-13 on Matthis Lebel's converted try early in the second half and soon crossed for another five-pointer that was erased after the television match official found a penalty in the lead-up.

Moefana broke through a tackle to set up Penaud's 58th-minute try, then scored himself three minutes later, putting his side up 35-16.

France led 42-16 on Pierre Bourgarit's converted try before Siosaia Fifita narrowed the deficit by dotting down for Japan following the final siren.

The two sides will meet again in the second test on July 9 at the National Stadium in Tokyo.