The Nikkei stock index in Tokyo extended its winning streak to three days Monday as the ruling camp's victory in Sunday's election gave reassurance on political stability, with gains boosted by the yen's drop to a new 24-year low against the U.S. dollar on remarks by the Bank of Japan governor.

On the top-tier Prime Market, gainers were led by pharmaceutical, precision instrument and transportation equipment issues. 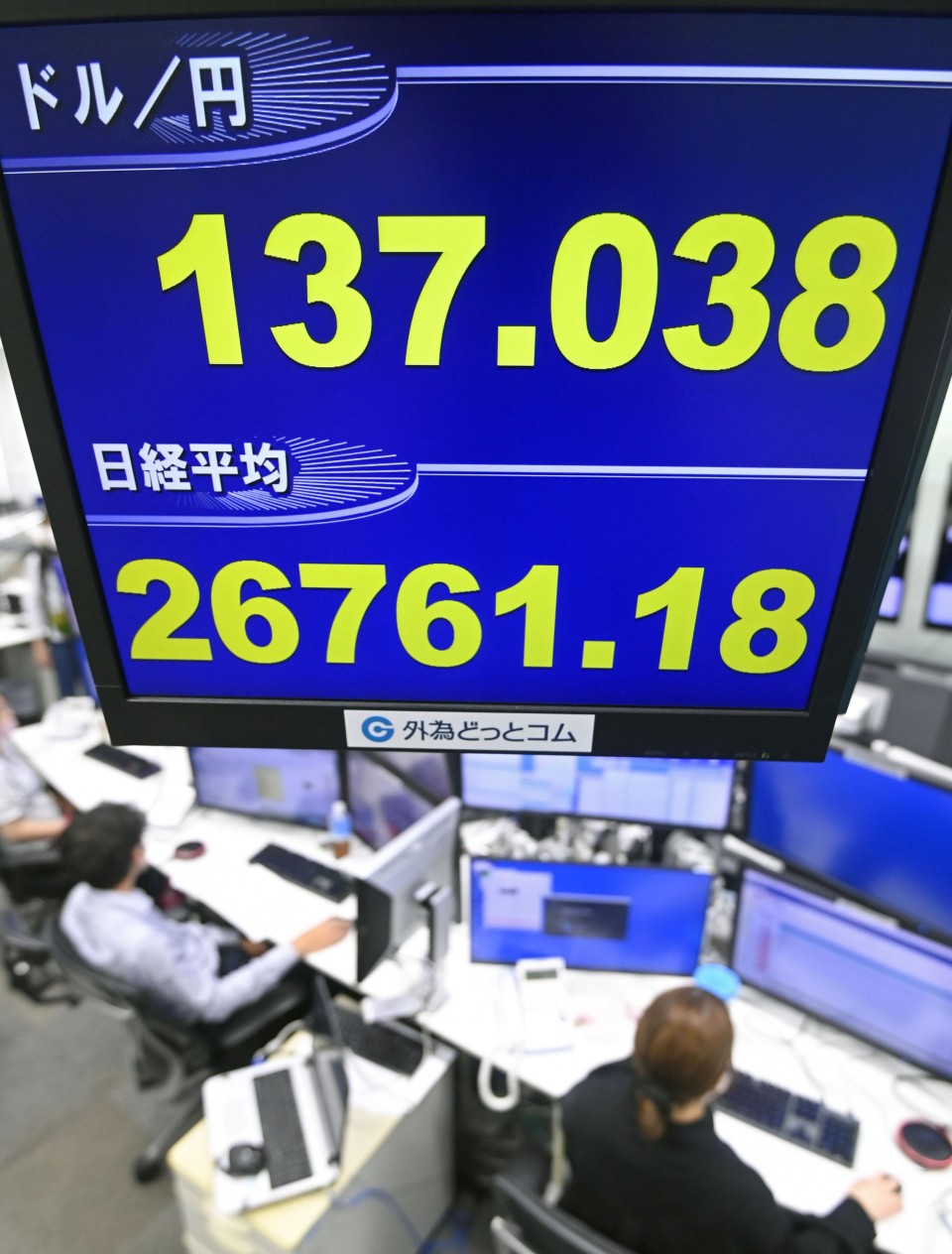 A financial board at a foreign exchange house in Tokyo's Shimbashi area on July 11, 2022, shows the dollar surging to the lower 137 yen range to mark a fresh 24-year high against the Japanese currency. (Kyodo) ==Kyodo

The Japanese currency briefly fell to as low as 137.28 against the dollar, its lowest level since September 1998, after BOJ Gov. Haruhiko Kuroda reiterated Monday at a meeting of the bank's branch managers that the BOJ will not hesitate to take additional easing measures if necessary, dealers said.

Adding to the downward pressure on the yen was the release of stronger-than-expected U.S. job data for June on Friday, which strengthened expectations for large interest rate hikes by the Federal Reserve and a wider gap between U.S. and Japanese government bond yields, they added.

The Nikkei index briefly extended gains to more than 500 points or over 2 percent, as sentiment was cheered after the LDP and its coalition partner Komeito secured a total of 75 seats in Sunday's House of Councillors election, enabling them to retain a majority in the 248-member upper house.

"Election results were in line with the market expectations, but shares were bought amid relief that Japan will see political stability for a few years," said Koichi Fujishiro, a senior economist at the Dai-ichi Life Research Institute.

The stock market took the U.S. jobs data as a positive sign, easing concerns over a recession in the United States, he said.

The U.S. economy created 372,000 nonfarm jobs in the reporting month, data from the Labor Department showed Friday, exceeding the market consensus of an increase of 268,000.

But the market trimmed gains as investors opted to cash in when the Nikkei index topped the 27,000 mark, analysts said.

Investors were also cautious about chasing the upside aggressively ahead of the U.S. consumer price index for June on Wednesday, which could further bolster expectations for rate hikes by the Fed, Fujishiro added.

BOJ lifts view on 7 of 9 regional economies in Japan