The winners of Japan's prestigious Akutagawa and Naoki literary prizes were revealed Wednesday, with female writers scooping the honors for works exploring themes of food and working relationships, and expectation for new encounters after emotional trauma.

Junko Takase's short novel "Oishii Gohan ga Taberaremasuyoni," (To become able to eat delicious food) won the Akutagawa Prize for up-and-coming authors, which this year fielded its first entirely female shortlist of five writers in its history dating back to 1935. 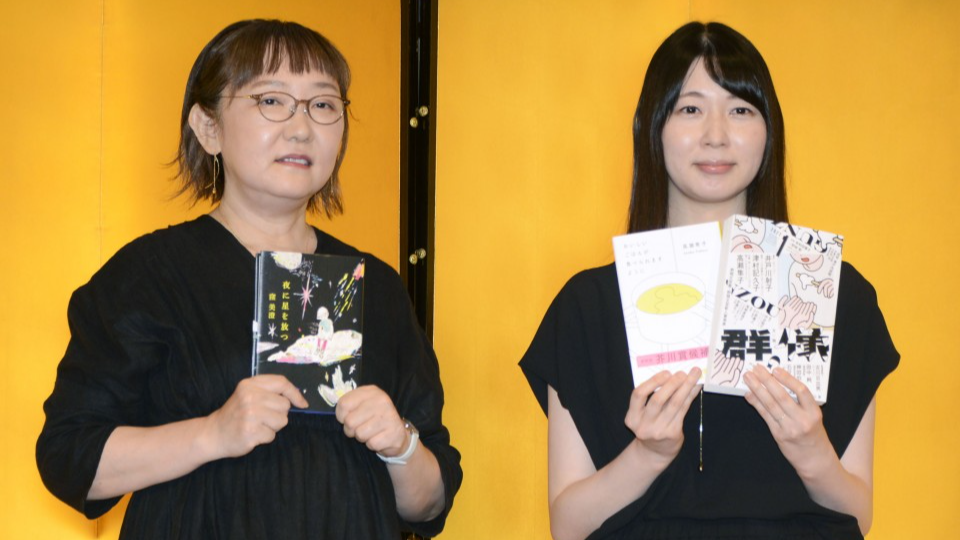 Junko Takase (R), winner of the Akutagawa Prize, and Misumi Kubo, winner of the Naoki Prize, hold up their award-winning works at a press conference in Tokyo on July 20, 2022. (Kyodo)

Misumi Kubo's short stories collection "Yoru ni Hoshi wo Hanatsu" (Releasing stars into the night sky) won the Naoki Prize for popular fiction, for which four women and one man were nominated.

Takase's novel explores the difficulties in the personal relationships among three colleagues of varying approaches and temperaments. The novel's protagonist is a man, and the 34-year-old writer said she was spurred to write the story after being told she "was not good at writing male characters."

In her praise of the work, Akutagawa Prize selection committee member and author Hiromi Kawakami, said, "It is a vivid realization of human relationships in a small group. It brilliantly portrays the complexity of people who are not simply good or bad."

Kubo's collection looks at loss, including through the story of a woman who during the coronavirus pandemic meets online and begins seeing the ex-boyfriend of her twin sister who died before turning 30.

Mariko Hayashi, an author who served on the Naoki selection committee, said the collection is "pure and beautiful," adding that it "does not shy away from the coronavirus pandemic, and is smoothly written."

Kubo, 56, had said she was "half happy and half terrified" to be nominated for a third time. Her debut novel "So We Look to the Sky" is available in an English translation published in 2021.

The selection committee announced their choices at a traditional Japanese restaurant in Tokyo's Tsukiji neighborhood.

Both authors will receive the awards themselves at a ceremony in Tokyo in late August, with each author receiving 1 million yen ($7,250) in prize money.

The Akutagawa Prize was established in 1935 in memory of Japanese novelist Ryunosuke Akutagawa. The Naoki Prize, created the same year, was named after author Sanjugo Naoki.