Asian security experts have welcomed the victory by Prime Minister Fumio Kishida's ruling coalition in Sunday's House of Councillors election, saying Japan's political stability and leadership are vital for shoring up a rules-based international order being challenged by countries such as China and Russia.

Citing Russia's aggression in Ukraine, China's increased assertiveness in the Indo-Pacific and North Korea's nuclear and missile development, the experts expressed support for, or at least did not oppose, Kishida's calls for boosting Japan's defense capabilities and amending the Constitution, including adding a reference to the Self-Defense Forces in the war-renouncing Article 9. 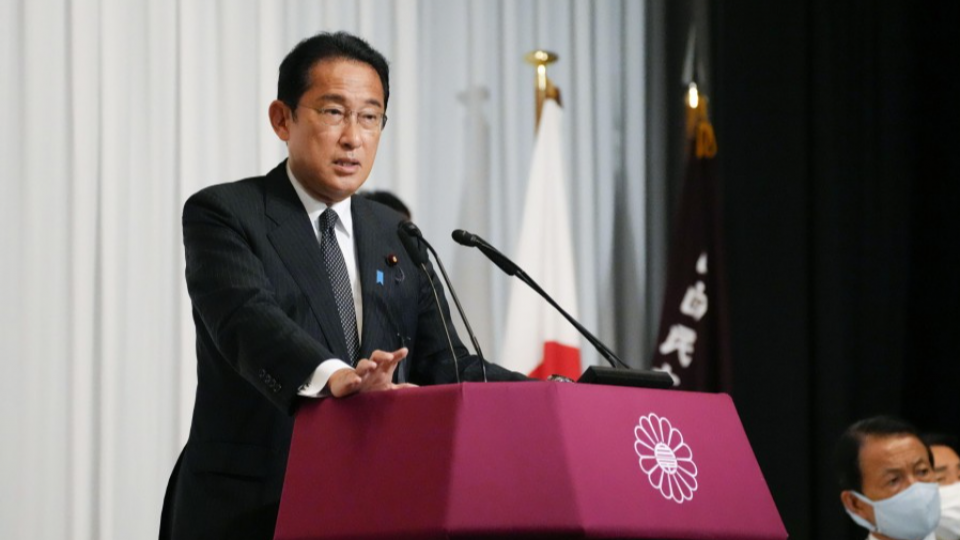 Japanese Prime Minister Fumio Kishida, who heads the Liberal Democratic Party, attends a press conference at its headquarters in Tokyo on July 11, 2022, a day after the ruling party scored a sweeping victory in the House of Councillors election. (Kyodo) ==Kyodo

"In the current environment with the war in Ukraine and growing concern over the risk of conflict between China and Taiwan, there is growing support for a greater Japanese security role in the Indo-Pacific," said Gordon Flake, chief executive officer of the Perth USAsia Centre at the University of Western Australia.

Stressing that "Ukraine today may be East Asia tomorrow" -- an apparent reference to Beijing's territorial ambitions with regard to Taiwan and the Japanese-controlled Senkaku Islands in the East China Sea -- Kishida has vowed to "fundamentally reinforce" Japan's defense capabilities in the next five years with a "substantial increase" in the defense budget.

Kishida, who with Sunday's win will be free of national elections for the next three years unless he dissolves the House of Representatives, the more powerful lower chamber of parliament, has also not ruled out introducing counterstrike capabilities as part of efforts to strengthen the deterrence and response capabilities of the Japan-U.S. alliance.

"In recent years, Japan's political stability and leadership in regional security affairs have been greatly appreciated by Australia," Flake said in an email. "Australia would welcome a more robust Japanese role in the South China Sea, in the South Pacific, and in the Indian Ocean" -- potential flashpoints in the Indo-Pacific given China's rising clout there.

Similarly, the Association of Southeast Asian Nations sees Kishida's diplomacy as aligning with the group's emphasis on rules-based principles and humanitarian assistance in opposition to any attempt to unilaterally change the status quo by force, says Kavi Chongkittavorn, a Bangkok-based regional affairs expert.

"ASEAN shares Japan's stance on key regional and international issues that could undermine peace and the rules-based order. We also appreciate what I call Mr. Kishida's 'middle-of-the-road approach to diplomacy' with ASEAN," said Kavi, a senior fellow at the Institute of Security and International Studies at Chulalongkorn University.

He was referring to Tokyo's stance that takes regional interests into consideration without forcing the 10-nation group to choose sides between the United States and China in their strategic competition in the Indo-Pacific.

Reflecting Kavi's comments, a survey by the ISEAS-Yusof Ishak Institute in Singapore shows Japan remains the most trusted major power among Southeast Asians with 54.2 percent of respondents expressing confidence in the country. This compares with 52.8 percent for the United States and 26.8 percent for China.

Of those who express distrust toward China -- which, however, is seen as the most influential economic power in the region -- 49.6 percent fear Beijing could use economic and military power to threaten their country's interest and sovereignty, according to the latest State of Southeast Asia survey.

Referring to calls in Kishida's Liberal Democratic Party to double Japan's defense spending to 2 percent or more of gross domestic product, a level on a par with North Atlantic Treaty Organization member states, Flake said Australia has met the level and recommended Japan follow suit because the United States can no longer shoulder the full burden of international security alone.

However, the killing Friday of Shinzo Abe, a former prime minister and leading advocate of a 2 percent target in the LDP, may affect debate on the issue because some LDP lawmakers -- including Kishida -- and its junior coalition partner Komeito argue that substance, not size, should come first.

Flake also said Australia understands Kishida's intention to make what would be the first-ever amendment to the Constitution, a goal he shared with Abe, while Kavi said ASEAN regards it as an "internal matter" for Japan.

With the election victory, the LDP-Komeito coalition and other pro-constitutional reform forces continue to control more than two-thirds of the seats in both houses of the Diet, a condition required for initiating an amendment. A proposal must then be approved by a majority in a national referendum.

Abe had argued that the proposed amendment would stop some scholars from being able to call the SDF "unconstitutional" in the absence of a reference in the Constitution. Others, however, were concerned that it could provoke China and South Korea, both of which suffered from Japan's wartime militarism.

"There will be predictable opposition in China, and some from South Korea, but public views in Australia, and much of the Indo-Pacific, on Japan's international role have changed dramatically for the positive," Flake said.

A South Korean scholar says he anticipates some degree of criticism in Seoul about Kishida's push for stronger defense and constitutional reform, but public opinion could change depending on how bilateral relations evolve under South Korean President Yoon Suk Yeol, who took office in May with a pledge to improve ties with Japan and the United States.

"One view is that we have no choice but to accept Japan's larger security role in light of the Ukraine crisis and other challenges like North Korea and China. The other is deep-rooted suspicion against Japan because of history issues," said Park Jung Jin, a professor of international relations at Tsuda University in Tokyo.

"If the current state of bilateral ties remains unchanged, doubts in South Korea about Tokyo's pursuit of stronger defense posture and closer security cooperation with Seoul and Washington are likely to increase, which is not good at a time when Pyongyang appears to be preparing for what would be its seventh nuclear test," Park said in an interview.

Tokyo-Seoul ties sank to their lowest level in decades under Yoon's predecessor Moon Jae In due to the so-called comfort women and wartime labor issues stemming from Japan's 1910-1945 colonial rule of the Korean Peninsula.

Park said turning ties around will depend on whether Kishida can show a flexible stance on the issue of compensation for requisitioned Korean workers now that South Korea has launched a government-private consultative body in an effort to address the row.