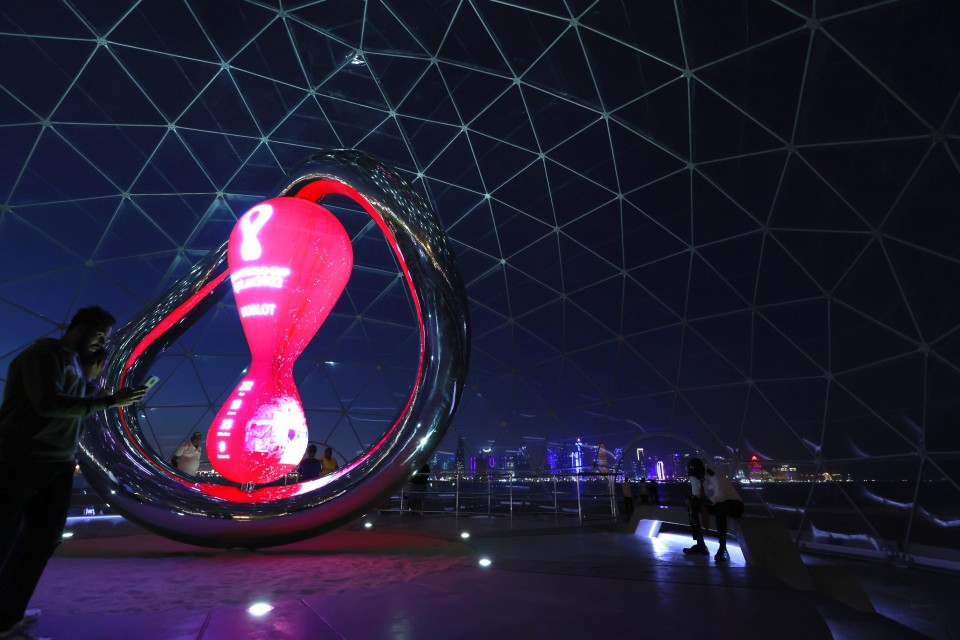 Photo taken in Doha on April 2, 2022, shows a countdown clock for the World Cup football tournament in Qatar. (Kyodo) ==Kyodo

TOKYO - Japanese Foreign Minister Yoshimasa Hayashi and his Chinese counterpart Wang Yi are planning to hold in-person talks on Thursday on the sidelines of a series of Association of Southeast Asian Nations meetings in Cambodia, government sources said Saturday.

The top Japanese diplomat is expected to air concerns over repeated intrusions by Chinese coast guard ships into Japanese waters around the Tokyo-controlled, Beijing-claimed Senkaku Islands, as well as China's intensifying military activities near Japanese waters.

WASHINGTON - The United States and Japan on Friday vowed to defend an open, rules-based international economic order amid challenges posed by China and Russia, while pursuing joint development of next-generation semiconductors through a research hub Japan has decided to launch.

The announcements were made as the two countries' foreign and economy ministers met for their inaugural "two-plus-two" talks, as addressing economic vulnerabilities has become more vital for their national security with China increasing its clout in the Indo-Pacific and Russia's war against Ukraine sparking food and energy supply concerns.

TOKYO - A high-ranking lawmaker of Japan's ruling party on Friday brushed off the recent scrutiny over connections between the Unification Church and his party members following the assassination of former Prime Minister Shinzo Abe.

"Frankly speaking, I don't really know what the problem is," Tatsuo Fukuda, chairman of the General Council, the decision-making organ of the Liberal Democratic Party, said during a press conference.

TOKYO - The Unification Church under scrutiny in the aftermath of the killing of former Prime Minister Shinzo Abe has emotionally entrapped many people such as the accused gunman's mother, lawyers committed to helping victims of the religious body said Friday.

A group of three from the National Network of Lawyers against Spiritual Sales told a press conference that the church, formally known as the Family Federation for World Peace and Unification, receives donations by instilling fear in believers for relatives both living and deceased, including the specter of hell.

WASHINGTON - Japanese Foreign Minister Yoshimasa Hayashi said Friday he will work "tenaciously" to build a broader global consensus to oppose attempts to change the status quo by force in the wake of Russia's war in Ukraine, warning that the "logic of brute force" is gaining traction in the Indo-Pacific.

"Russia's aggression needs to go down in history as a clear failure, otherwise it is inevitable that other countries will follow Russia and attempt to change the status quo by force," Hayashi said at a think tank event during his first visit to the U.S. capital since assuming the foreign minister's portfolio in November.

BEIJING - North Korea on Saturday reported there were no new fever cases, with the figure hitting zero for the first time since the country confirmed its first coronavirus case on May 12, according to the official Korean Central News Agency.

Despite no new cases being reported in the 24 hours through 6 p.m. Friday, Pyongyang is continuing its anti-virus campaign amid the spread of highly contagious Omicron subvariants in neighboring countries.

TOKYO - Prime Minister Fumio Kishida plans to unveil next week a plan to create a U.N. fund to help young people from around the world learn about atomic bombs through visits to Hiroshima and Nagasaki, the two Japanese cities devastated by such weapons, government sources said Friday.

The envisaged fund is part of Kishida's broader plan toward realizing a world free of nuclear weapons, the sources said. It will be included in a speech he plans to deliver Monday when he attends a U.N. conference to review a nuclear nonproliferation treaty, becoming the first Japanese leader to do so.

"We will put the system we have in place into full operation to move forward with social and economic activities," Kishida said in an interview with Kyodo News and Hiroshima-based Chugoku Shimbun.