Prosecutors searched the Tokyo home Tuesday of an executive of the now-defunct Tokyo Olympic organizing committee on the grounds he may have accepted bribes, investigative sources said.

Haruyuki Takahashi, 78, is believed to have received around 45 million yen ($330,000) from major business suit retailer Aoki Holdings Inc. after a company he headed reached a consulting deal with the firm. Aoki's Olympic sponsorship was announced about a year later. 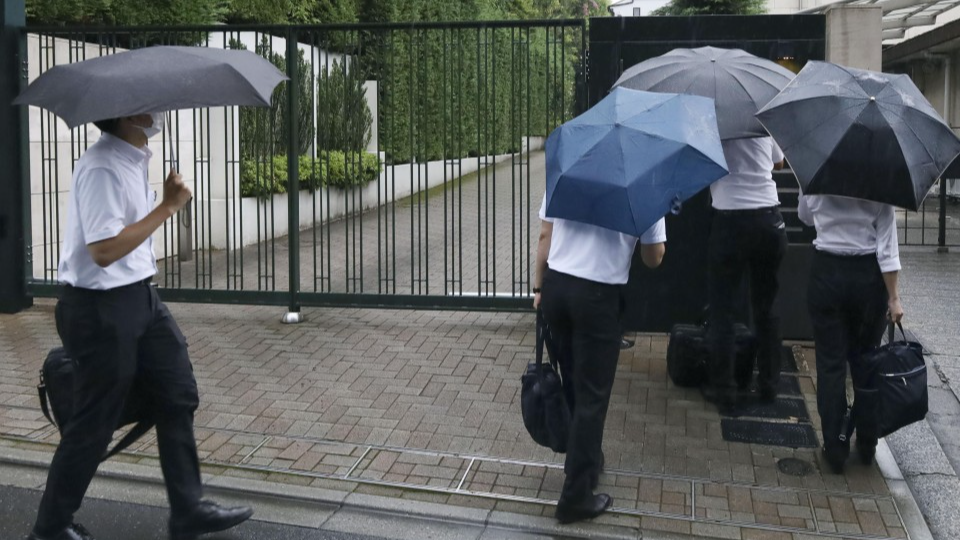 Prosecutors head to the home of Haruyuki Takahashi, an executive of the now-defunct Tokyo Olympic organizing committee, in Tokyo on July 26, 2022. (Kyodo)

Investigators are looking into the flow of funds and what influence it had on the holding of the sporting event, as Takahashi was deemed a quasi-civil servant in his capacity as an executive of the committee. Accepting money or gifts related to his duties could constitute bribery and Takahashi could face corruption charges.

Many Dentsu employees were seconded to the organizing committee's marketing division, which was responsible for selecting sponsors for the Tokyo Games, and prosecutors are also looking into whether Takahashi exerted any influence in the selection of sponsors.

According to a source familiar with the case, the consulting firm headed by Takahashi signed the deal with Aoki worth 1 million yen per month in September 2017. Aoki announced in October 2018 that it had sealed an "official supporter" contract with the Olympic organizing committee.

The contract allowed Aoki to use the events' emblems for business purposes and sell officially licensed products, including suits bearing the emblems.

The company has sold more than 30,000 suits and jackets bearing the emblems to the public since summer 2019. It also provided athletes with outfits for the Tokyo Games' opening ceremonies.

Takahashi has so far denied any wrongdoing in interviews with Kyodo News.

Seiko Hashimoto, who served as president of the organizing committee and who is a member of the House of Councillors for the ruling Liberal Democratic Party, told reporters that the investigation taking place was "extremely regrettable."

Aoki Holdings' former chairman and founder Hironori Aoki, who retired last month, told prosecutors, after agreeing to answer their questions, that he had "high hopes in Takahashi's power" given his background.

Takahashi had said earlier that the contract between his consulting firm and Aoki included "proposals for management and new ventures," and had nothing to do with the organizing committee.

Japan on Saturday marked one year since the opening of the Tokyo Games, which were postponed by a year from 2020 due to the coronavirus pandemic. The organizing committee was disbanded at the end of last month.