Japan's nuclear regulator on Friday officially approved a plan to discharge into the sea contaminated but since-treated water accumulating at the crippled Fukushima Daiichi nuclear power plant in the northeast.

The government and plant operator Tokyo Electric Power Company Holdings Inc. aim to begin releasing the water from about 1 kilometer off the Pacific coast in Fukushima Prefecture around next spring. The water contains hard-to-remove tritium below an allowed ceiling and will be further diluted.

TEPCO will start construction of discharge facilities after gaining consent from localities hosting the plant, but fishing communities in Japan oppose the plan out of fear of reputational damage to the seafood industry. 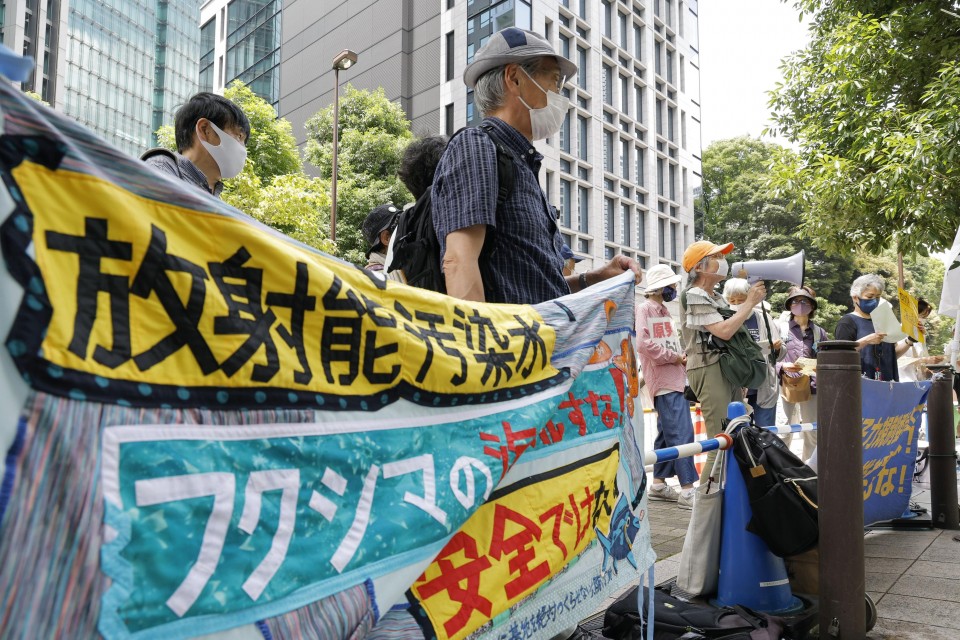 People stage a rally in Tokyo on July 22, 2022, to protest against a plan to release treated radioactive water accumulated at the crippled Fukushima Daiichi nuclear power plant into the sea. (Kyodo)

South Korea and China have expressed concerns about the discharge as well.

According to the agreement TEPCO has signed with the prefecture and the host towns of Okuma and Futaba, the operator must gain their consent before building or adding facilities that could cause their area to be impacted by radioactive materials.

In December, TEPCO formally asked the Nuclear Regulation Authority for an evaluation of the plan, under which the company will discharge the water through an underwater tunnel after diluting it with seawater to one-40th of the concentration permitted under Japanese regulation.

It is expected to take several decades to complete the discharge of water, which was treated through an advanced liquid processing system that removes radionuclides except for tritium.

In May, the regulator gave the green light to specifications of the diluting facility, as well as a method of suspending the discharge of treated water when an unusual situation is detected, and measures against earthquakes and tsunami, among others.

The regulator received some 1,200 submissions from members of the public about their opinions of the plan.

One suggestion was that the regulator "should clearly explain the plan's safety to the public." Another was, "There should be alternatives, such as making storage tanks bigger and expanding the land space."

Nuclear Regulation Authority Chairman Toyoshi Fuketa said at an agency meeting on Friday that TEPCO should try to reduce the amount of water contaminated with radioactive materials and streamline work toward the discharge, as it will take some time to measure the tritium concentration of treated water before it can be released.

Responding to the regulator's official approval of the plan, the South Korean government held a hastily called meeting and stressed in a statement that it will take "best responsive measures internally and externally" under the principle that people's health and security are of utmost importance.

South Korean experts and officials are participating in a monitoring of the planned discharge, which is led by the International Atomic Energy Agency, the government said, adding it will work with the IAEA so that "scientific and objective verification will take place, with the contaminated water being handled in accordance with international laws and criteria."

Later Friday, China expressed its firm opposition to the regulator's move as Foreign Ministry spokesman Wang Wenbin said at a press conference that it is "extremely irresponsible for Japan to ignore the concerns of all parties."

He noted that many questions have been raised about the environmental impact from the planned water discharge, reliability of Japanese data and effectiveness of purification devices and that Tokyo has yet to give feedback to a list of technical problems jointly submitted by China and Russia.

If Japan "insists on taking a dangerous step, it will definitely pay the price for its irresponsible behavior and leave a historical stain," Wang warned.

The Fukushima power plant was damaged by the 2011 massive earthquake and tsunami, with core meltdowns occurring at multiple nuclear reactors. Water that has become contaminated after being pumped in to keep the melted fuel cool has been accumulating at the complex, also mixing with rainwater and groundwater at the site.