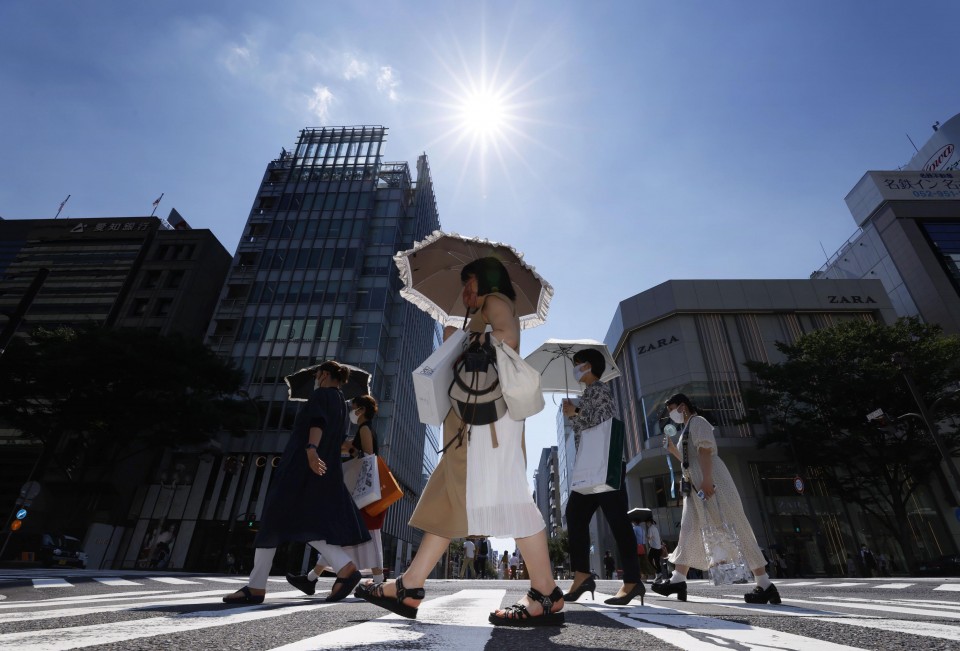 People walk with parasols under the scorching sun in Nagoya in Aichi Prefecture, central Japan, on July 1, 2022. (Kyodo) ==Kyodo

TOKYO - KDDI Corp., one of Japan's top three carriers, said Saturday its mobile customers have been facing difficulties making calls and getting online for over half a day, with the disruption of its nationwide networks also impacting services from banking and transmission of weather data to parcel deliveries.

The "au" mobile brand operator said work to restore the networks continues after the disruption began at around 1:35 a.m., but no time frame for a resumption of services has been provided.

TOKYO - Japan's government on Friday eased its travel warning over the coronavirus pandemic for 34 countries, including China, South Korea and India, and is no longer requesting that residents in Japan refrain from nonessential trips to those nations.

The Foreign Ministry also lowered its travel advisory for France, Germany and Italy, as well as other 11 European nations, by one notch to the lowest Level 1 on its four-point scale, advising Japanese nationals traveling to those regions to "stay fully alert."

TOYOTA, Japan - Japan made a strong start before fading in the second half of a 42-23 loss to France in Saturday's first test at a sweltering Toyota Stadium in Aichi Prefecture.

Center Yoram Moefana scored one try and set up another for the Six Nations champions, who showed why they will be among the favorites to lift the trophy when they host the 2023 Rugby World Cup.

WASHINGTON - The United States reaffirmed its commitment to the Treaty on the Non-Proliferation of Nuclear Weapons as a U.N. review conference on the pact is one month away, Secretary of State Antony Blinken said Friday.

Noting that the treaty opened for signatures on this day 54 years ago, Blinken said in a statement, "The NPT has provided the essential foundation for international efforts to stem the looming threat -- then and now -- that nuclear weapons would proliferate across the globe."

HONG KONG - Chinese President Xi Jinping called his country's governance of Hong Kong a success on the 25th anniversary Friday of the handover of the former British colony as he attended a ceremony marking the special administrative region's transition into a new era under Beijing's tightened grip.

TOKYO - Three Russian naval vessels passed between Japan's two westernmost islands of Yonaguni and Iriomote, the Defense Ministry said Saturday, as tensions between Tokyo and Moscow continue to intensify over the Ukraine crisis.

The destroyer, frigate and supply ships sailed between the islands near Taiwan from Friday through Saturday and moved into the East China Sea, said the ministry, which, for the first time, disclosed Russia's naval passage in the area.

TOKYO - Canadian musician Randy Bachman, a former member of rock band The Guess Who, was recently reunited with his beloved guitar in Tokyo some 45 years after it was stolen.

The instrument was found to have made its way into the hands of a professional musician in Japan, who agreed to return it to the Canadian rocker. Speaking during the Friday handover at the Canadian Embassy in Tokyo, Bachman held the guitar reverently and said he felt like an abandoned wish had come true.