The Japanese government currently has no plans to impose restrictions amid the seventh wave of coronavirus infections, but it remains to be seen whether the medical system will be able to endure the cost of this decision.

Over 105,500 new infections were reported nationwide Sunday, almost double from a week earlier and topping 100,000 for the third straight day. Among the surge, partly driven by the highly transmissible BA.5 Omicron subvariant, the number of severe cases rose by 15 from a day earlier to 129. 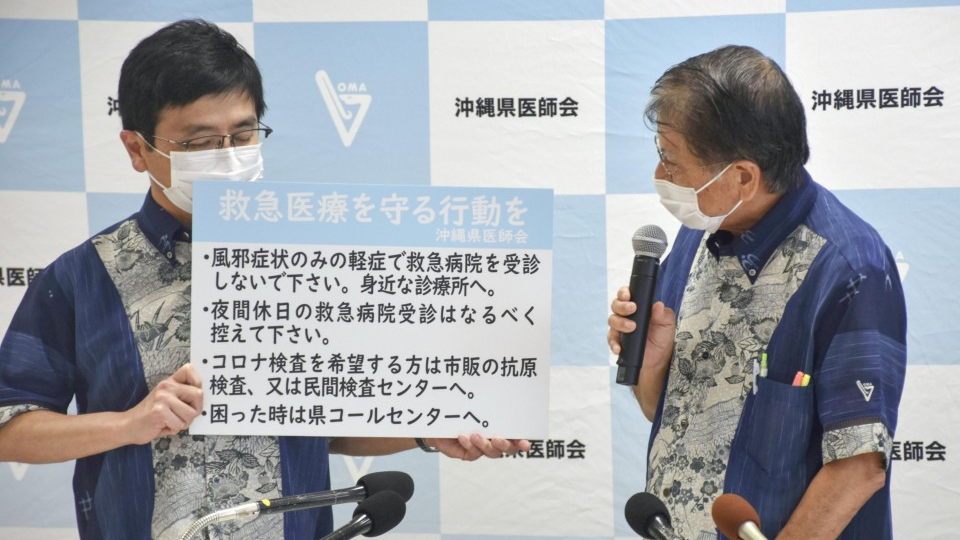 The Okinawa Medical Association holds an emergency press conference on July 15, 2022, in Haebaru, Okinawa Prefecture, to address the surge in COVID patients. (Kyodo)

"If the number of serious cases continues to increase, hospital bed vacancies may not be able to keep pace," said Hironori Sagara, director of Showa University Hospital in Tokyo.

The hospital, which has been accepting patients with relatively severe COVID-19 symptoms, had admitted less than 10 in the first half of June, but the number has risen to around 20 in July.

Daily infections in Japan had been steadily declining since reaching a peak of about 104,000 infections on Feb. 3, but a resurgence has been seen since late June.

While the system of transferring patients to hotels or facilities once their symptoms subside has been operating smoothly, it only worked because most patients had mild to moderate symptoms, according to Sagara.

"The situation will change in the future when people with underlying illnesses are hospitalized for longer periods. In order to manage this, we must make efficient use of the beds," he said.

Hospital bed occupancy rates in Tokyo, which reported 17,790 new infections Sunday, have surpassed 30 percent, with over 2,000 people hospitalized as of July 12.

Tokyo Gov. Yuriko Koike has ordered measures to reduce the number of deaths and severe cases, including increasing the number of rooms available at treatment facilities from 9,000 to 12,000 while maintaining socioeconomic activities.

The situation is even more serious in Okinawa, with the island prefecture reporting a record 4,165 new infections Sunday and a hospital bed occupancy rate of around 60 percent.

With patients complaining of high fevers flooding emergency wards, Okinawa's prefectural medical association, at a press conference Friday, called for people not to make emergency visits just for "light cold symptoms," stressing that the system is "on the verge of collapse." 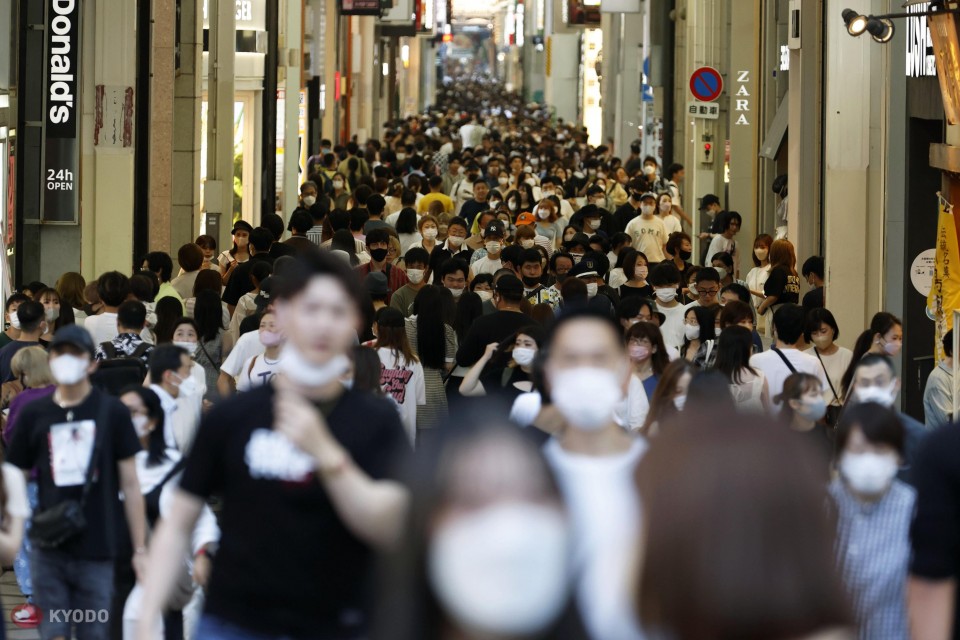 People wearing masks for protection against the coronavirus walk in Osaka's Minami area on July 17, 2022. (Kyodo)