The United States and Japan on Friday vowed to defend an open, rules-based international economic order amid challenges posed by China and Russia, while pursuing joint development of next-generation semiconductors through a research hub Japan has decided to launch.

The announcements were made as the two countries' foreign and economy ministers met for their inaugural "two-plus-two" talks, as addressing economic vulnerabilities has become more vital for their national security with China increasing its clout in the Indo-Pacific and Russia's war against Ukraine sparking food and energy supply concerns.

In a joint statement released after the meeting, the two close security allies said they need to make their economies "more competitive and resilient," committing to "countering threats to economic security and to the rules-based international economic order." 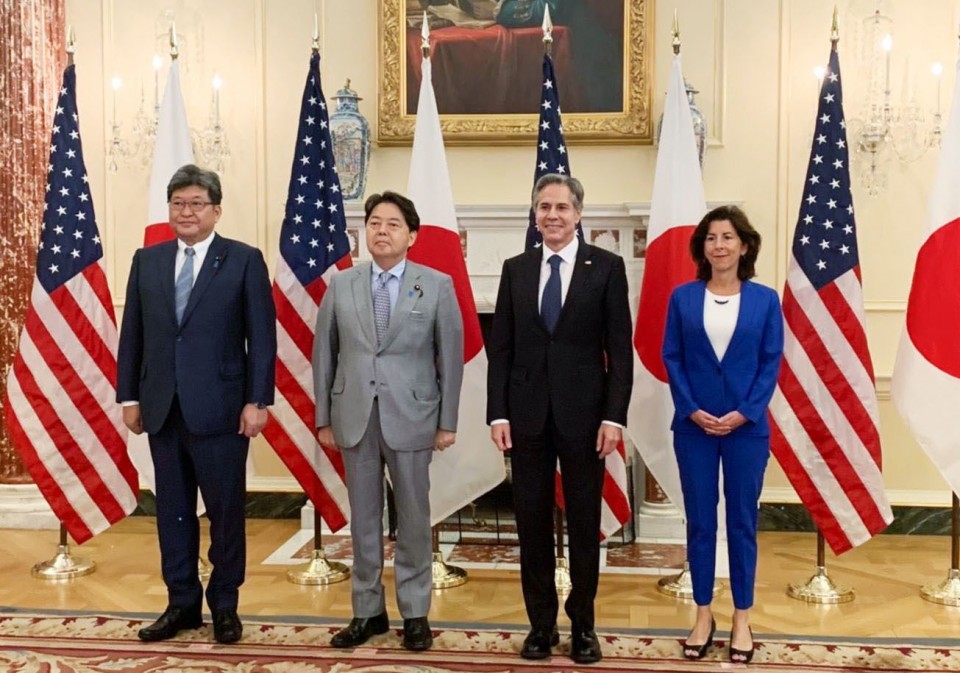 They also came up with an action plan focusing on efforts to strengthen supply chain resilience, counter economic coercion and opaque lending practices, and secure critical technologies and infrastructure.

"In an era in which foreign security policy and economic policy are inseparable, we have been able to open a new page in the Japan-U.S. alliance," Japanese Economy, Trade and Industry Minister Koichi Hagiuda told reporters after attending the talks, which were co-hosted by U.S. Secretary of State Antony Blinken and Commerce Secretary Gina Raimondo in Washington.

Japan and the United States have long held "two-plus-two" talks involving the countries' foreign and defense chiefs to discuss security issues, but the leaders of the two countries agreed in January this year to establish an economic version of the dialogue.

While the joint statement did not explicitly name China, the U.S. side indicated that efforts to beef up economic security are driven by the assertiveness of the Asian powerhouse and its use of economic leverage to pressure other countries into concessions.

Touching on a bill the U.S. Congress passed on Thursday that would invest $52 billion in domestic semiconductor production, Raimondo said the funding will strengthen partnerships with allies like Japan in the sector, and "make us less dependent on our adversaries for such a critical piece of technology."

The four ministers agreed to advance efforts to foster supply chain resilience in strategic sectors, including, in particular, semiconductors, batteries and critical minerals.

The semiconductor supply chain has come under increasing scrutiny as the coronavirus pandemic has triggered a global shortage of the essential components used in everything from smartphones and laptops to cars as well as national defense systems.

The United States is also mindful that the world's semiconductor manufacturing capacity is concentrated in East Asia, with Taiwan accounting for 20 percent of the global total in 2019, followed by South Korea, Japan, China and the United States, according to a June 2021 report by the White House.

To accelerate the joint development of next-generation semiconductors, expected to be used for artificial intelligence and other purposes, Japan announced the launch of a new research and development organization that will bring together Japanese expertise.

"It will be made open to overseas businesses and research institutes, inclusive of Japan, the United States, and likeminded countries in the region," Hagiuda said, adding he hopes to make it into "a hub for international joint research."

In the action plan, Japan and the United States also said they will continue joint efforts to enhance export controls on critical and emerging technologies, including surveillance systems, to prevent misuse by malicious actors.

There is growing concern that the use of surveillance tools and other technologies by authoritarian governments is leading to serious human rights abuses, such as censorship of political opposition, tracking of dissidents, intimidation of minority communities and the undermining of free expression.

Reiterating their condemnation of Russia's aggression against Ukraine, Japan and the United States said they will work together to mitigate the impact of the war on energy and food markets.

They agreed to strengthen investment in the energy sector and ensure energy resources in the near term, including liquefied natural gas, in response to the current crisis, and pledged to work together to create more resilient nuclear supply chains.

"The United States and Japan stand for open, sustainable, and inclusive economic growth that delivers prosperity, upholds democratic values, reduces economic disparities, and protects human rights in the Indo-Pacific region and beyond," the joint statement said.

The vision will also be promoted through the Indo-Pacific Economic Framework, a U.S.-led economic engagement initiative joined by more than a dozen countries including Japan, it added.

The four ministers agreed that they should meet under the "two-plus-two" format periodically, and to gather again next year.