Japan's first-round leader Ayaka Furue shot a 1-over 72 Friday and fell seven shots off the pace at the Evian Championship, the fourth women's major of the year.

After opening with a 63 on Thursday, Furue carded two birdies and three bogeys at the Evian Resort Golf Club to tie for 11th alongside four other players, including compatriot Nasa Hataoka, who shot 5-under with seven birdies and one double bogey. 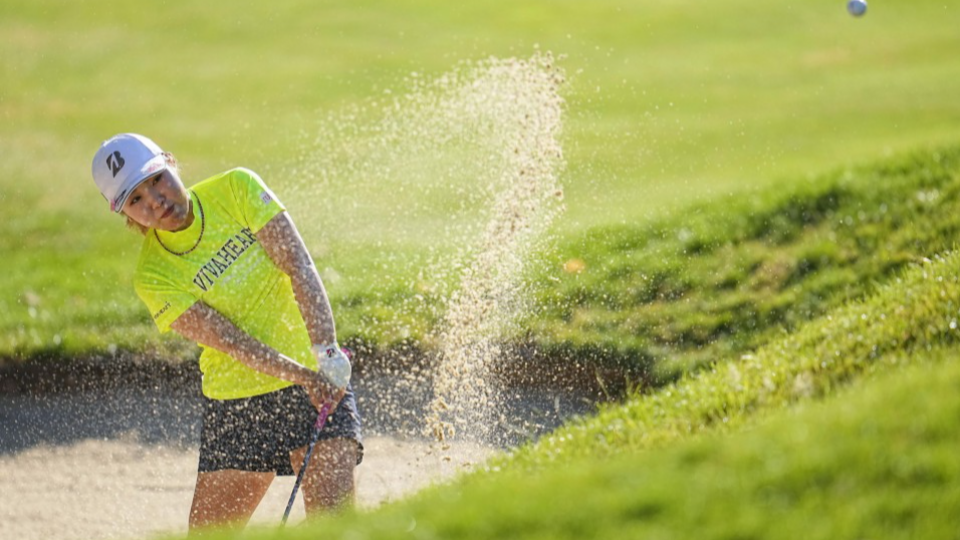 Ayaka Furue of Japan hits out of a bunker on the fourth hole during the second round of the Evian Championship on July 22, 2022, at Evian Resort Golf Club in Evian-les-Bains, France. (Kyodo) ==Kyodo

Canadian Brooke M. Henderson fired a 64 for the second straight day to lead by three strokes at 14-under. Nelly Korda of the United States is second.

Furue, a U.S. tour debutant who was fourth here a year ago, is aiming for her first major championship. She failed to build on her flying start after a bogey on the front nine.

A frustrating back nine awaited, where she followed her birdies on Nos. 11 and 14 with bogeys on 12 and 15.

"It really was a day to persevere. It was a bit hard to get bogeys straight after sinking birdies," she said.

Yuna Nishimura was 30th at 3-under and Mao Saigo 42nd at 2-under as four Japanese made the cut.

Yuka Saso missed out on the weekend by two strokes at 2-over, as did amateur Mizuki Hashimoto and Hinako Shibuno.