The sweeping victory of Japan's ruling party in Sunday's upper house election gives Prime Minister Fumio Kishida a free hand to tackle long-term issues, but controversial plans for revising the Constitution may take a back seat as he faces rising prices and the fallout from the assassination of influential predecessor Shinzo Abe.

The death of Abe, shot just two days ahead of voting while on the campaign trail, raised the prospect of uncertainties in the internal politics of Kishida's Liberal Democratic Party, as Abe, the hawkish former party chief who was Japan's longest-serving prime minister, was the leader of the party's largest faction. 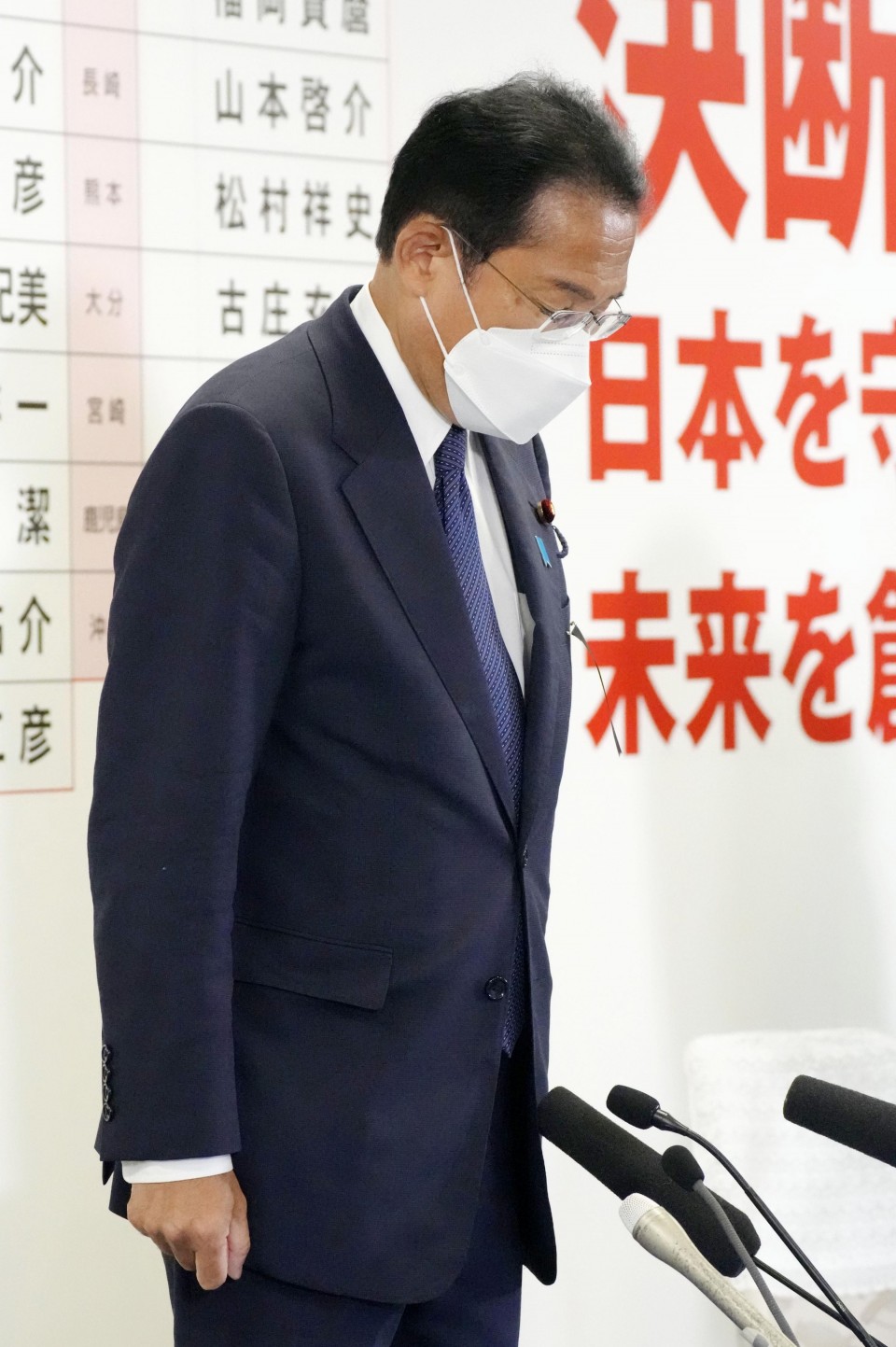 Japanese Prime Minister Fumio Kishida observes a moment of silence in Tokyo for former Prime Minister Shinzo Abe, who was shot to death in Nara during election campaigning, on July 10, 2022, the day of the House of Councillors election. (Kyodo) ==Kyodo

Rising commodity and energy prices, exacerbated by a weak yen, also remain a risk factor for Kishida's government, as they weigh on a country already battered by the novel coronavirus pandemic and struggling with long-stalled growth.

Abe's assassination appears to have produced a sympathy vote effect for the LDP, boosting the party's dominance in parliament over an already weak and fragmented opposition and increasing the likelihood of Kishida leading the party into the next national election expected in 2025.

But Abe's death also means moves to seek an amendment of the U.S.-drafted war-renouncing Constitution, a long-cherished goal of the party, is likely to lose steam as he spearheaded the drive, according to Masahiro Iwasaki, political science professor at Nihon University.

"Ultimately his death turned out to be a major boost to the LDP in the election, but the outlook for a constitutional amendment appears increasingly grim, with the symbolic figure of the pro-change forces gone," Iwasaki said in an interview.

Hitoshi Komiya, professor of Japanese political history at Aoyama Gakuin University, said Abe's death could also result in a power struggle to succeed him as a faction leader. That, he said, would make it harder for Kishida, the liberal-leaning head of a major faction within the conservative party, to strike a deal with the right-wing of the party in deciding policies in the absence of its leader.

"In the short-term, Mr. Kishida would be able to do a variety of things as he wishes, but in the long run, (the absence) will have a negative impact on him as well," Komiya said in a separate interview.

Up until Abe's death, momentum for constitutional amendment was building, despite opposition parties including the Constitutional Democratic Party of Japan voicing alarm and the LDP's coalition ally Komeito expressing wariness.

The public had been becoming more comfortable with the idea of constitutional revision, including explicit reference to the Self-Defense Forces, on the back of security concerns prompted by the Russian invasion of Ukraine in February. The support of Kishida as a liberal-leaning leader also appeared to help dampen concerns.

"A center-left person like Mr. Kishida, who is not at all like Mr. Abe, who speaks of bolstering defense and prioritizing constitutional amendment is more likely to succeed in bringing about such changes, because people on the right will support him and those on the left will tolerate them thinking Mr. Kishida will carefully handle it," said Komiya.

Iwasaki said Kishida may still hold discussions on the Constitution as there will be people who will call for carrying forward Abe's desire for revision, but he is likely to be less enthusiastic about pursuing the goal compared with Abe.

For Kishida, Japan's energy problems and price increases may be a more pressing issue. 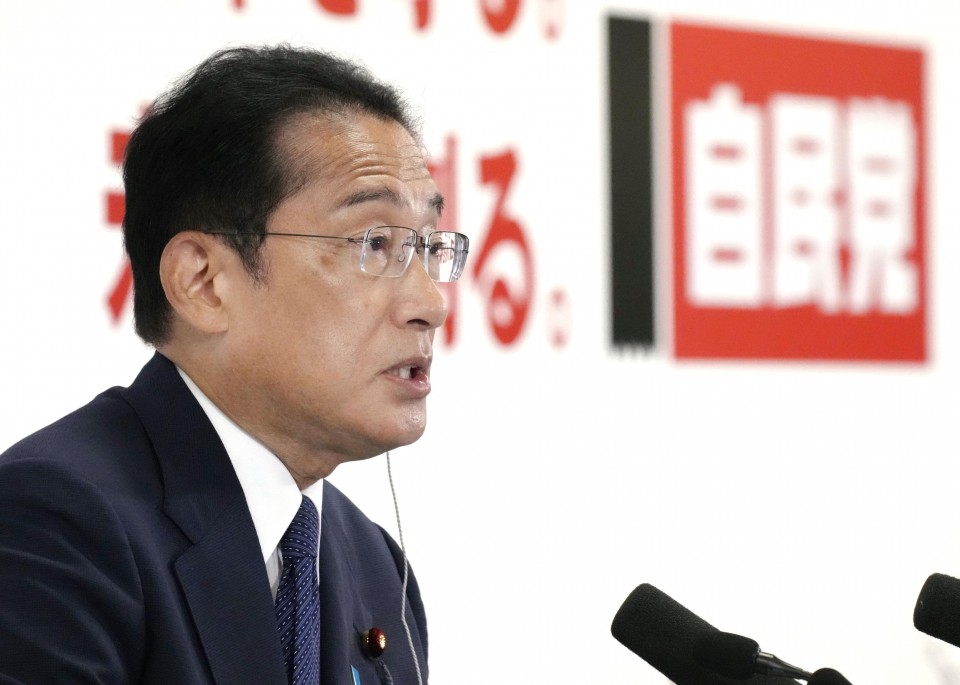 Japanese Prime Minister and Liberal Democratic Party leader Fumio Kishida has a TV interview at the party's headquarters in Tokyo as the results of the House of Councillors election come in on July 10, 2022. (Kyodo) ==Kyodo

A recent Bank of Japan survey showed nearly 90 percent of Japanese said they had felt price rises while a pre-election poll showed 40 percent of voters had named the economy as their main concern, exceeding interest in any other issue.

Japan, a resource-scarce country, has been shifting toward renewables but they remain a small share of supply, while nuclear power plants remain idled following the Fukushima nuclear crisis triggered by the massive earthquake and tsunami of 2011.

"There is no simple solution," said Komiya, suggesting the issue could weigh on the Kishida government after the election.

"As people's wages are not increasing, the damage from price increases stemming from energy problems will take a toll, leading to increased pressure on Kishida to do something about it," he said.

Aside from dealing with such challenges, how Kishida will use his increased mandate in the next few years remains unclear.

He has so far called for shifting to a "new capitalism" in a departure from "Abenomics," a set of economic policies under Abe marked by monetary easing, fiscal stimulus and structural reforms.

Kishida has called for doubling people's incomes from assets, although he has offered few clues on how he is going to realize such a goal.

With South Korea electing Yoon Suk Yeol as new president, he has also called for improving ties with Seoul that have been strained over wartime issues, but Kishida has maintained that it is South Korea's turn to act, not Japan, after earlier initiatives by Tokyo.

The death of Abe, who actively engaged in summit diplomacy, also leaves Kishida, who served as foreign minister under Abe, without a predecessor to consult over diplomatic policies at a time of international tensions caused by the Russian invasion of Ukraine.

Whatever he does, however, Kishida is unlikely to face any challenge to his grip on power for the coming few years.

"When we look at whether there is someone who can take over from Kishida, there is no one," said Iwasaki, noting that those who ran against him in the last LDP presidential election including Taro Kono have limited support within the party now.

"There is an environment for Kishida to preside for a long time," Iwasaki said.