One of five Japanese to have played in both German and Spanish top divisions, Hiroshi Kiyotake was happy to see his country join the former World Cup winners in Group E of this year's tournament in Qatar.

Currently captaining his old side Cerezo Osaka in the J-League first division, the 32-year-old said his sentiment was not necessarily just nostalgia from his time in Europe but more from Japan getting to face two title favorites on the biggest stage. 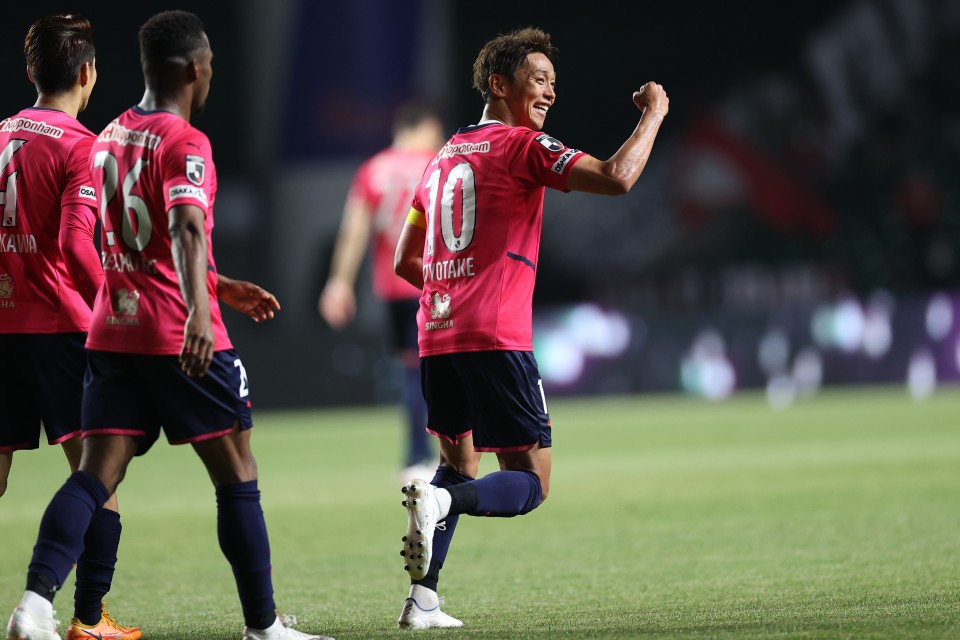 "I've been away from the national team for a while, so I was hoping to see the matchups as an individual Japan fan," Kiyotake, who was last called up in March 2017 before a string of injuries ruled him out of the 2018 World Cup in Russia, told Kyodo News recently.

"It'd be normally looked at as a tough group, but I felt we've gone into a good one. I was hoping for us to go in there a bit and thought, 'Wow, it'd be interesting.'"

An agile attacker with vision and delicate touches off both feet, Kiyotake was a vital cog in Japan's fourth-place 2012 London Olympic team, who beat Spain 1-0 in the opener at Hampden Park.

His only World Cup appearance came in 2014 in Brazil, but he remained on the bench as Japan suffered a 2-1 comeback defeat to Ivory Coast before a 0-0 draw with 10-man Greece. He came on with just five minutes left in the final group game against Colombia as the Samurai Blue lost 4-1 to exit the tournament. 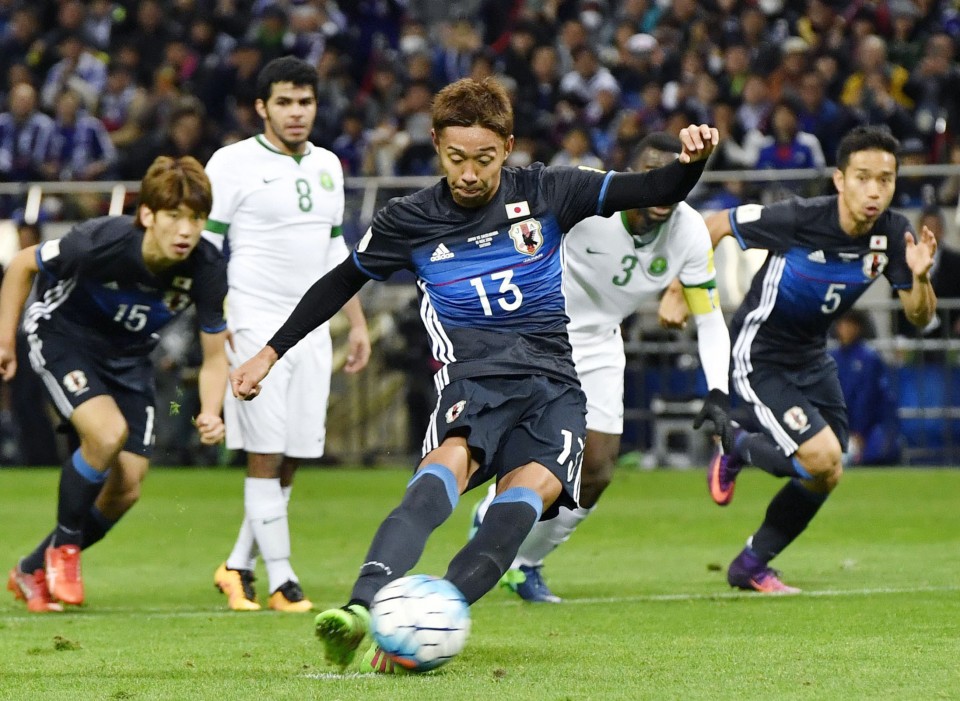 Hiroshi Kiyotake of Japan opens the scoring from the penalty spot during the first half of a Group B Asian World Cup qualifier against Saudi Arabia at Saitama Stadium in Saitama, north of Tokyo, on Nov. 15, 2016. (Kyodo)

"From my time at the Olympics and World Cup, I really feel the importance of the first game," he said. "Getting the momentum hinges on that game."

The Oita Trinita youth product left Cerezo for Germany right after the Olympics, and following two seasons each with Nurnberg and Hannover, scoring 17 goals in 117 Bundesliga appearances, Kiyotake sees common themes in Japanese and German footballers.

"Germany are quite similar to Japan in that everyone plays with discipline, and in that sense I'm expecting a solid approach from both sides with individual differences settling the matter," he said. 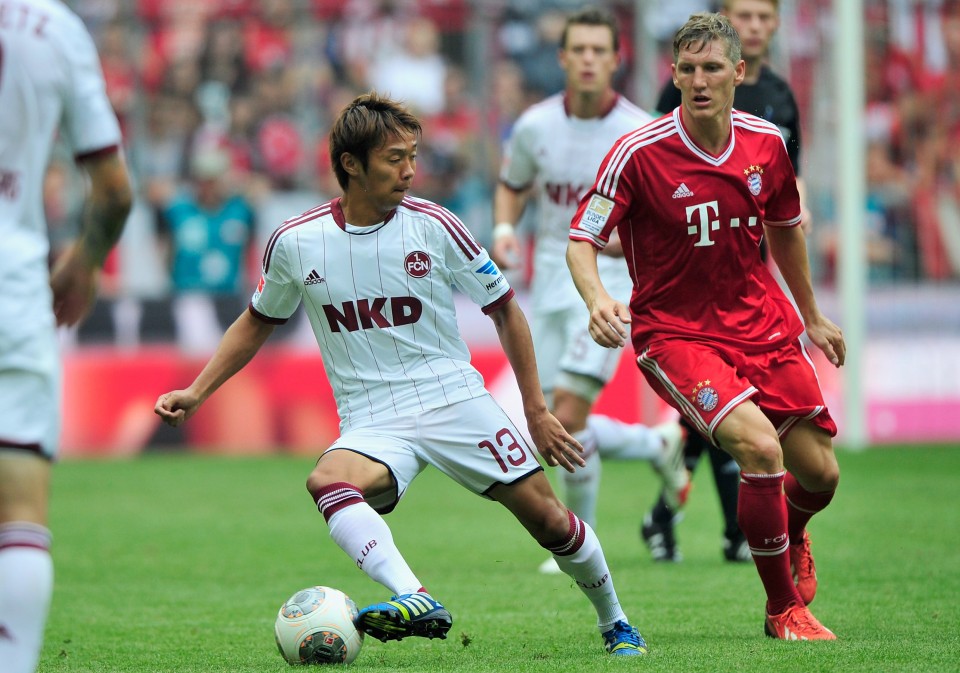 Hiroshi Kiyotake (L) of Nurnberg is pictured in action against Bayern Munich in a Bundesliga match on August 24, 2013 in Munich, Germany. (Bongarts/Getty/Kyodo)

While acknowledging Germany as a "well-balanced team" marshaled by keeper Manuel Neuer, Kiyotake said three points should remain Japan's goal rather than thinking about a draw from the start.

"We've got the chance to play a really good team in Germany and I personally want Japan to go for the win, and a part of me thinks we actually could," he said.

"We've got many players playing in Germany, some in Spain too, and I reckon it'd be easier playing games against sides with players who many of our members know well."

Kiyotake's spell in Spain lasted half a season after he joined the then three-time reigning Europa League winners, Sevilla, in 2016.

It arguably remains the most high-profile Japanese move to La Liga, with Takefusa Kubo yet to play for his parent club Real Madrid. Yoshito Okubo, Takashi Inui, Shinji Okazaki and Yoshinori Muto, who all had Bundesliga spells, played for teams out of title contention in Spain.

Kiyotake had an auspicious debut, playing a full 120 minutes in a 3-2 extra-time UEFA Super Cup defeat to Real Madrid, before scoring one and setting up another in Sevilla's 6-4 La Liga opening win over Espanyol. But things fizzled out following Samir Nasri's late loan arrival from Manchester City, compounded by his own language issues. 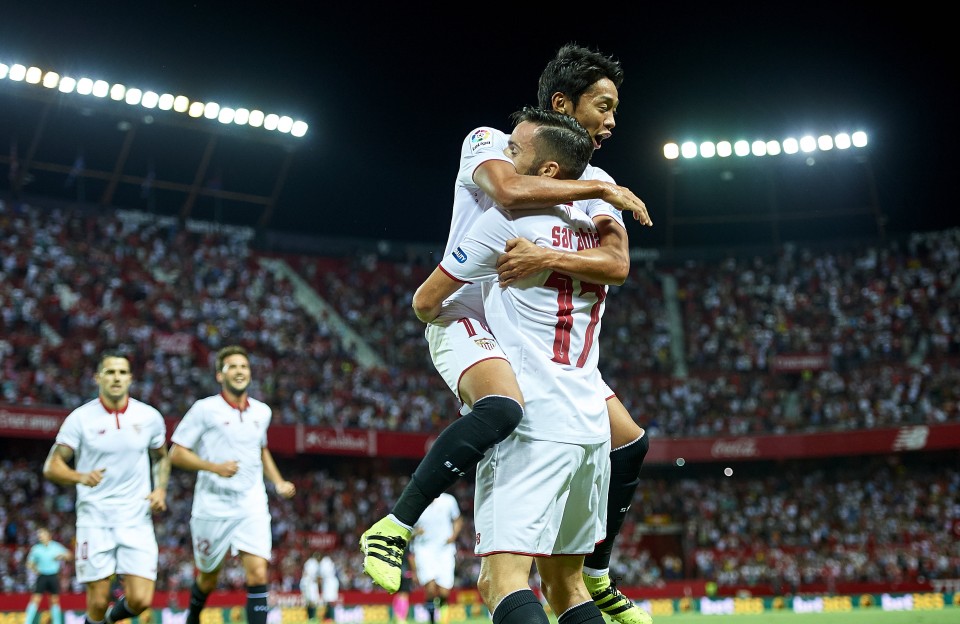 Pablo Sarabia of Sevilla FC celebrates with his team mate Hiroshi Kiyotake after scoring against Espanyol in August, 2016 in Seville, Spain. (Getty/Kyodo)

The competition for attacking midfield positions was fierce and one of his direct rivals, left-footed Pablo Sarabia who joined the Andalusian side at the same time, is set to stand in Japan's way in Qatar.

"He was a really earnest, quiet player and very skillful from the start," Kiyotake said of the 30-year-old Paris Saint-Germain man, who scored in Spain's last two UEFA Nations League matches against Switzerland and the Czech Republic in June.

"The way he kept the ball was unique, difficult for others to dispossess. He could lay it off to someone if put under pressure, or use that as a ruse to skip past a defender himself."

"(But) the biggest thing was his knack to be in front of goal. It's hard to be both a playmaker and finisher, and that's where I think he's a good player." 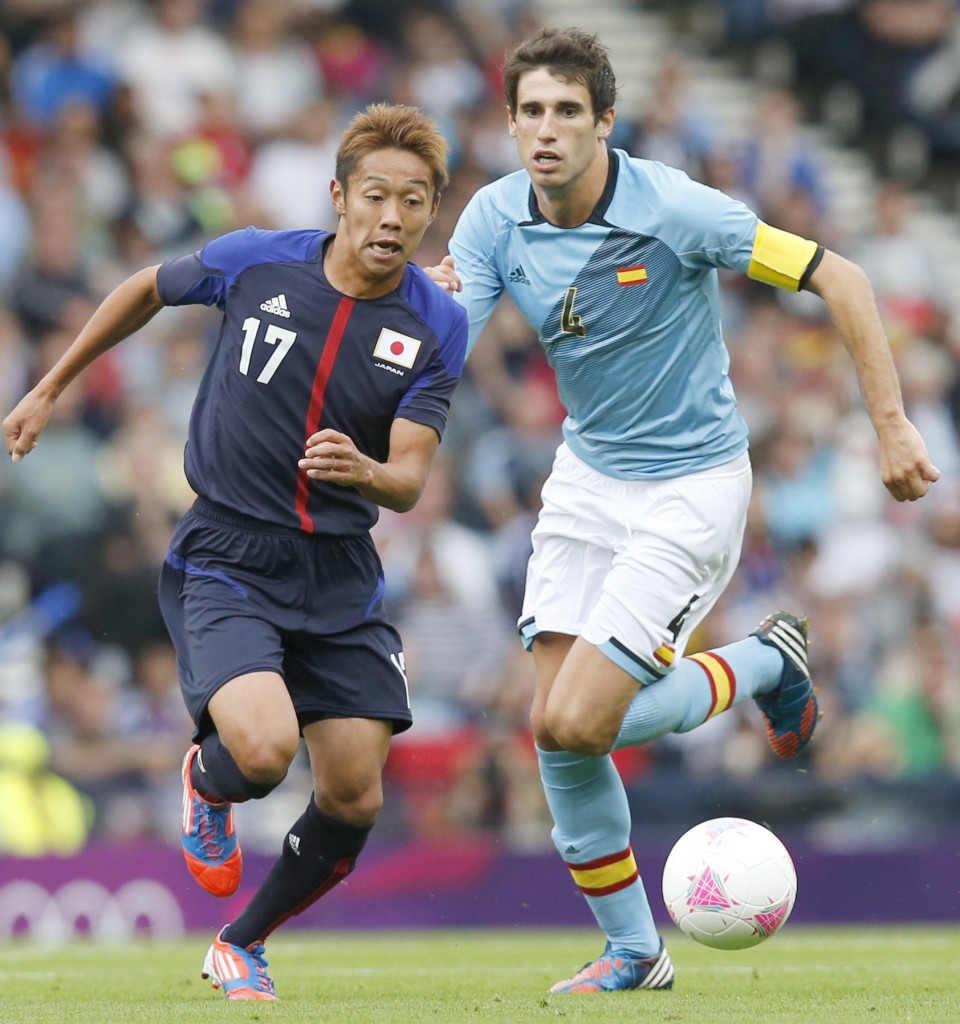 Japan's Hiroshi Kiyotake (L) vies for the ball with Spain captain Javi Martinez during the first half of an Olympic men's soccer Group D opener against Spain at Hampden Park on July 26, 2012. Japan beat Spain 1-0. (Kyodo)

Kiyotake nonetheless has the experience of beating Spain in Glasgow and suggested the tireless approach from that game, which saw their technically gifted counterparts go a man down after conceding, could provide a foothold.

"Our pre-Olympic reputation wasn't high at all and our priority was to run hard at them as we had nothing to lose. We were putting each of their players under pressure all the time," he said. "I think that will be a must against Spain."

"They'll have the bulk of possession and will peel away easily if we keep doing one-on-ones, so how we pressurize their ball-holder will be important."