The average life expectancy of Japanese women and men declined for the first time in 10 years in 2021, health ministry data showed Friday, as the country battled with the COVID-19 pandemic. 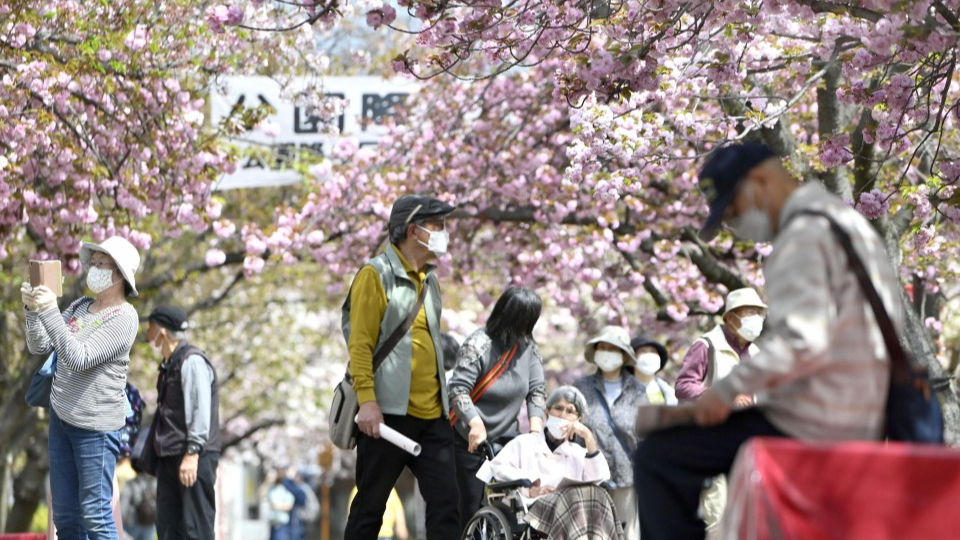 People stroll under cherry blossoms near the Japan Mint head office in Osaka on April 12, 2022. (Kyodo)

It was the first decline since 2011, when a massive earthquake and tsunami hit northeastern Japan, causing meltdowns at the Fukushima Daiichi nuclear complex and leaving more than 15,000 dead and scores of people unaccounted for.

A ministry official emphasized that the pandemic had a significant impact on the average life span, saying, "COVID-19 was behind the decline for most of the men."

Despite the fall, Japan remains No. 1 in terms of life expectancy for women, followed by South Korea at 86.5 years and Singapore at 85.9 years, according to the ministry.

Japan was in third place for men in the ranking led by Switzerland, whose men have an average life span of 81.6 years and Norway at 81.59 years.

"The average life expectancy in Japan is still on a rising trend," the official added.

The number of coronavirus patients in Japan surged in 2021, the second year of the pandemic, driven by the highly-contagious Delta and Omicron variants. About 16,000 people died of the virus in that year, according to calculation by the ministry.

Average life expectancy is the average length of time a person at birth is expected to live, assuming that the death rate in a year does not change.

According to the ministry's estimate, 88.3 percent of Japanese women who were born last year are expected to live until 75 years old, while the corresponding percentage for men is predicted to be 76.0 percent.

The ministry also said 52.0 percent of women who were born in 2021 are likely to live until the age of 90, while the corresponding percentage of men stood at 27.5 percent, according to the ministry.

Among the newborns, 43.52 percent of women and 48.90 percent of men could die in the future from cancer, heart disease or vascular brain disease, the ministry said.

In a scenario in which no one dies from cancer or any of the other diseases, the average life span could be extended by 5.28 years for women and 6.49 years for men.

Of those born last year, 0.95 percent of women and 1.27 percent of men are likely to die from the coronavirus in the future, up 0.75 and 0.98 percentage points respectively from a year ago, according to the ministry.