The 67-year-old was an influential politician even after stepping down as prime minister in 2020, having led the largest faction in the conservative ruling Liberal Democratic Party.

Born to a prominent political family, Abe's grandfather Nobusuke Kishi and great-uncle Eisaku Sato had also served as prime ministers. Abe worked as a secretary for his father, former Foreign Minister Shintaro Abe, before being elected to the House of Representatives in 1993 from a constituency in Yamaguchi Prefecture. 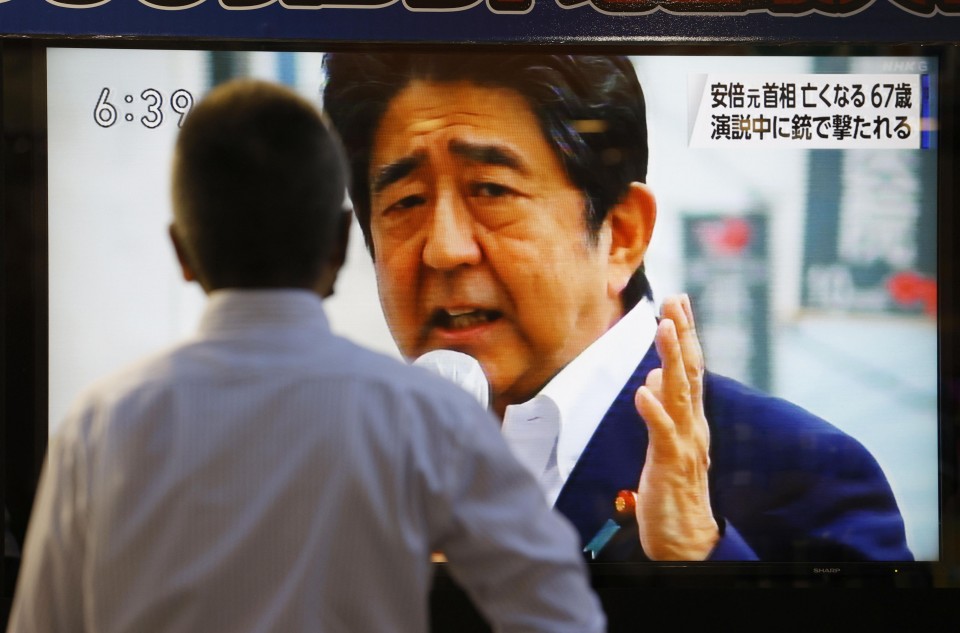 A street TV in Tokyo shows news that former Japanese Prime Minister Shinzo Abe was shot to death in Nara on July 8, 2022. Abe, 67, was giving a stump speech for the July 10 House of Councillors election. (Kyodo) ==Kyodo

In September 2006, at age 52, he became the youngest prime minister in postwar Japan, although he resigned a year later due to poor health following the party's major defeat in the House of Councillors election.

After the short stint, he brought the LDP to a landslide victory in the lower house election in December 2012 as the party leader and returned to power. After nearly eight years, he stepped down due to a chronic intestinal disease flare-up and was succeeded by his chief Cabinet secretary, Yoshihide Suga.

During his last tenure, he pursued economic policies marked by massive monetary easing, fiscal stimulus and structural reforms to beat deflation and turn around a stagnant economy.

Abe also led Japan's entry into the Trans-Pacific Partnership free trade deal, with the agreement concluded despite concerns from agricultural groups over increased competition from imports.

He urged investors to "buy my Abenomics" on Wall Street in 2013, but by the time he left the post, the economy was hit by the novel coronavirus pandemic and had more debt than when he returned to power.

His policy mix has also been criticized for leading to widening inequality, with the gap in focus as the recent depreciation of the yen further spurs rising prices.

Domestically, he had pursued hawkish policies, including pushing for reforming Japan's U.S.-drafted pacifist Constitution to explicitly reference the status of the country's Self-Defense Forces to end arguments that they are unconstitutional.

In 2014, he went ahead with a reinterpretation of the Constitution to enable the use of collective self-defense -- defending allies even without an attack on Japan itself -- and expanded the role of the SDF under new security legislation in 2016, marking a major turnaround in Japan's postwar security policy.

To counter a rising China, Abe sought to strengthen the Japan-U.S. security alliance and promote the vision of a free and open Indo-Pacific region while actively engaging in summit diplomacy.

He accompanied U.S. President Barack Obama to the site of the U.S. atomic bombing of Hiroshima in 2016 and also built close ties with Obama's successor, Donald Trump. Abe and Trump called each other by their first names.

While keeping a hardline stance against North Korea, he took a conciliatory approach toward Russia. In 2018, Abe and Russian President Vladimir Putin agreed to accelerate talks to conclude a peace treaty between the two countries, hampered by a long-standing territorial dispute over a group of four islands called the Northern Territories by Tokyo and the Southern Kurils by Moscow.

But the talks ultimately fell through, with Abe's proposal for the return of the two smallest islands ending in failure.

Abe was also unable to resolve another long-standing issue -- North Korea's abduction of Japanese nationals in the 1970s and 1980s -- despite pledging to make it a top priority of his administration.

Regarding China and South Korea, Abe drew a strong reaction in 2013 by visiting the controversial Yasukuni Shrine in Tokyo, which enshrines war criminals along with war dead. The neighboring Asian countries regard the shrine as a symbol of Japan's past militarism.

Abe spearheaded Japan's efforts to win the bid to host the Olympics in 2013, going as far as donning a costume of the video game character Super Mario when making a surprise appearance at the closing ceremony of the previous Olympics in Rio de Janeiro in 2016.

He announced Japan's first state of emergency over the COVID-19 pandemic in 2020 but came under fire for the slow distribution of small washable cloth face masks, which were sarcastically referred to as "Abenomask," a pun on "Abenomics," among other missteps.

He was also mired in a slew of political scandals, notably the heavily discounted sale of state-owned land to a private school operator with ties to his wife Akie and the decision to approve the construction of a veterinary school under the Kake Educational Institution run by a friend.

Another high-profile political scandal linked to Abe emerged in 2019 and involved allegations that his camp illegally paid for dinner receptions held for supporters.