The major victory by Japan's ruling coalition in a parliamentary election Sunday is expected to keep Tokyo stocks firm, assuring the market of political stability and raising hopes that Prime Minister Fumio Kishida will take steps that could spur stock buying.

Still, the upward momentum will likely prove modest as investors remain concerned over the risk that a potential U.S. economic slump from the Federal Reserve's monetary tightening could push the global economy into a recession, analysts say. 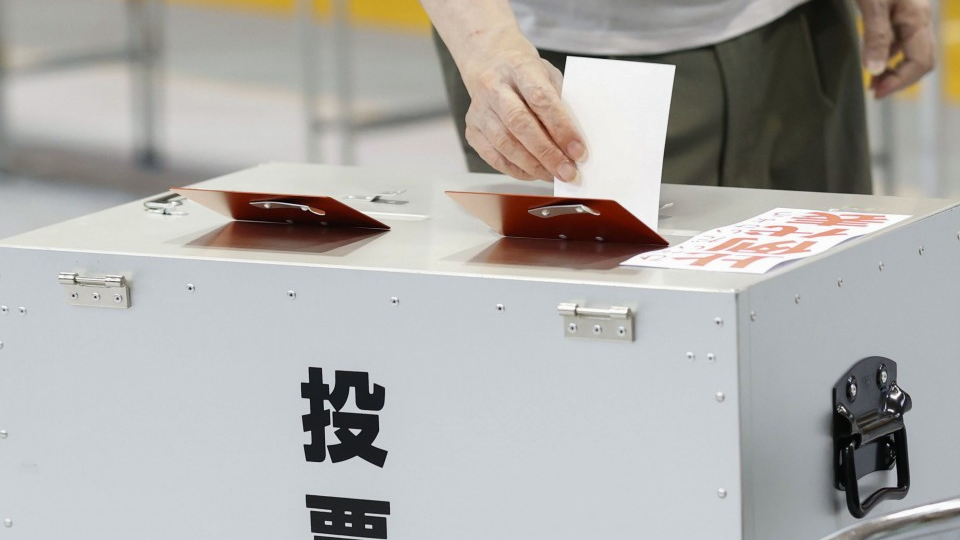 A voter casts a ballot for Japan's House of Councillors election at a polling station in Osaka on July 10, 2022. (Kyodo) ==Kyodo

Some market participants, meanwhile, are worried that Kishida may tweak economic policies that he largely took over from former Prime Minister Shinzo Abe, who had remained an influential figure within the ruling Liberal Democratic Party before he was killed Friday. The "Abenomics" policy mix had helped lift the Tokyo market substantially through aggressive monetary easing.

The Kishida-led LDP and its coalition partner Komeito won 76 of the 125 up for grabs in the House of Councillors election. No national election will be held for the next three years unless Kishida chooses during that period to dissolve the House of Representatives.

Kishida's first win in an upper house election since he took office in October last year "will garner optimism and create a smoother path for the coalition to pass their bills" in parliament, said Shingo Ide, chief equity strategist at NLI Research Institute.

Hopes are now rising that the Kishida government, in line with its election pledges, will undertake measures to boost investments in startups 10-fold to 10 trillion yen ($7 billion) and encourage more individuals to shift their money to investments from savings to double household asset incomes, analysts say.

The ruling party also pledged to continue to provide subsidies to oil wholesalers to keep gasoline prices from soaring as part of countermeasures against surging prices.

Measures such as a subsidy program for oil wholesalers to bring down retail gasoline prices "will have a positive impact in the short-term," said Masahiro Yamaguchi, head of investment research at SMBC Trust Bank.

"But (they) will likely fail to address the underlying issue, which is simply putting a cap on costs," he added.

Most consumers are already feeling the pressure of rising prices, as shown in a recent Bank of Japan survey that found 89 percent of Japanese people had felt an increase in prices from a year earlier.

If Kishida's countermeasures fail to ease worries about inflation, it "may become the Achilles' heel of his coalition," NLI Research's Ide said.

Some analysts say there are only few options left for the ruling coalition to take to stem price rises immediately. Pandemic-induced supply chain disruptions continue to drag on and Russia's war in Ukraine is intensifying. The coalition's victory is unlikely to reverse the yen's weakness, adding upward pressure to import prices.

Investors, meanwhile, will keep a close watch on the U.S. economic outlook out of fears that the Fed could be so aggressive in raising interest rates to fight inflation that the world's biggest economy plunges into a recession.

Japan's economy "is likely to follow in the steps of the United States" if the U.S. economy slumps, said Kazuo Kamitani, a strategist in the investment content department of Nomura Securities Co.

In stark contrast to the Fed's policy, the Bank of Japan has shown no sign of altering its ultraeasy monetary policy. On Monday, BOJ Gov. Haruhiko Kuroda reiterated at a meeting of the bank's branch managers that the BOJ will not hesitate to take additional easing measures if necessary. The Japanese central bank's policy could continue to send the yen lower against the U.S. dollar, analysts said.

The Japanese currency may drop to the 140 line against the U.S. dollar after setting a new 24-year low of 137.00 on June 20, about 19 percent weaker than the level around 115 yen in early March, analysts say.

A weaker yen is often seen as a boon to Tokyo stocks as it boosts exporters' profits earned overseas when repatriated. But investors are now concerned that the yen's continued slide will fuel inflation and make import products more expensive.

Even after commodity and food prices started picking up significantly, Abe, as the head of the LDP's largest faction, had said the BOJ should continue easing monetary policy.

The fatal shooting of the former prime minister and the end of BOJ Gov. Haruhiko Kuroda's term in April next year could be an opportunity for Kishida to rethink the side effects of monetary easing, some analysts say.

"The outlook for the Japanese currency has become more unclear without (Abe's) support," Nomura's Kamitani said.