A record number of both women and LGBTQ candidates are campaigning to win over voters in the House of Councillors election on Sunday and potentially bring change to Japan's male-dominated political landscape.

While some advocates have hailed the unprecedented number of female and openly LGBTQ hopefuls, the candidates' policies will be put to the test as surveys have shown that issues such as rising prices and social security will likely be at the forefront of voter concerns.

Out of 545 candidates, 181 women are campaigning in the triennial elections, attempting to win one of the 125 seats up for grabs in the 248-seat upper chamber of parliament.

This election is seen as some measure of progress in terms of fielding the highest record and ratio of female candidates at 33.2 percent, carrying the hope that it may increase female representation, although falling short of the government's goal for the ratio to reach 35 percent by 2025.] 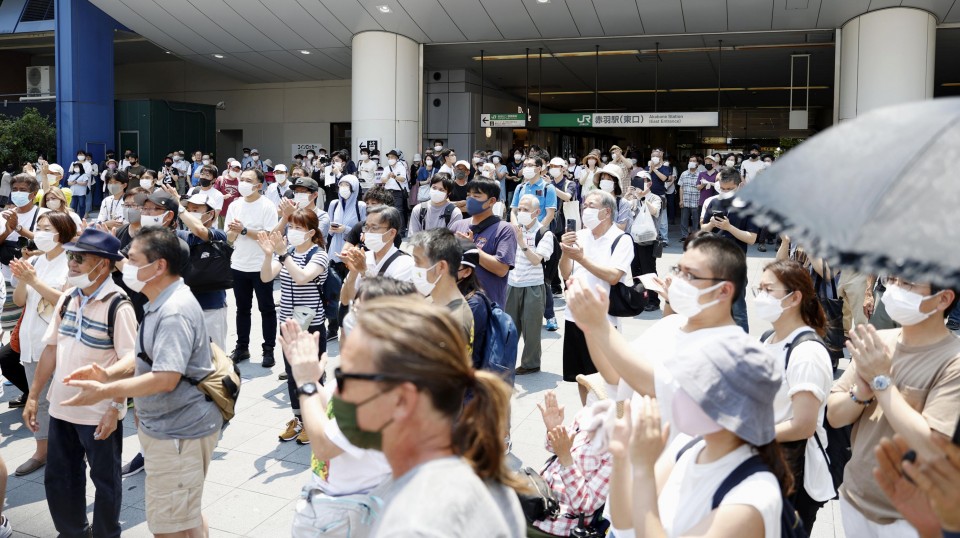 Photo taken on July 2, 2022, shows people listening to street campaigns in Tokyo ahead of the July 10 House of Councillors election. (Kyodo)

In a modest figure by comparison, four candidates from the lesbian, gay, bisexual, transgender and queer community also make up the highest number ever to aim for seats in the upper house.

The candidates include 50-year-old transgender candidate Karen Yoda from the Reiwa Shinsengumi party whose catchphrase is "Diversity is power," as well as 30-year-old Shunichi Murata from the Social Democratic Party, who identifies as bisexual, and Daigo Matsuura, 52, from the Japan Innovation Party, who is openly gay.

"Almost no one has come out in the political world. Only very recently, we had Kanako Otsuji and Taiga Ishikawa," he said of the lawmakers both from the main opposition Constitutional Democratic Party of Japan.

Ishikawa, an upper house member, is now the only remaining openly gay politician in the Diet after Otsuji failed to be re-elected to the House of Representatives last year, according to Matsunaka.

Matsunaka said that with no visible representation in the Diet, where the average parliamentarian is a 61-year-old, straight, cisgender male, people would not even know that LGBTQ people are among them and prejudices would not go away.

His comments came amid revelations last week a document saying that "homosexuality is an acquired mental disorder" and other discriminatory remarks against LGBTQ people was handed out in a June meeting of ruling Liberal Democratic Party members affiliated with a Shinto religious organization, sparking an outcry from rights groups and on social media.

Still, shaking the LDP and coalition partner Komeito's powerful influence is a challenge for any candidate, including 30-year-old Yohei Saiki who acknowledges that people will likely be inclined to vote for the LDP's familiar economic policies over those of a newcomer.

Saiki said he is "very conscious" of his visibility as an openly gay candidate for his independent Children's Party, which calls for more financial resources to be put toward child-rearing support, and he was "extremely encouraged" by Ishikawa's election debut at a time when he was still in the closet.

"I'm sure some people wonder whether it's really necessary to mention," Saiki said while campaigning in Tokyo's Bunkyo Ward. "But if I don't say that I'm gay, people might not know, and I want to show that we exist in society."

While surveys have indicated that 8 to 10 percent of the population identifies as part of the community, and the majority of Japan's population is in favor of same-sex marriage, issues concerning LGBTQ individuals will likely be sidelined as preelection polls indicate the conservative LDP appears likely to win the election.

"Society is changing, but the Diet is not. There is an allergy to equality issues, especially for minorities," said Kanae Doi, Japan director of Human Rights Watch.

Improvements are only possible if the Diet catches up by passing laws and creating a system making political participation easier for diverse groups, she said.

A March 2021 report from the Cabinet Office found that of 994 people who gave up running for local or national-level elections, more women than men cited lack of funds and knowledge to run a campaign, and difficulty "balancing family life" if elected. Sexual harassment has also made the attempt unpalatable.

A recent House of Representatives survey, where only 46 out of the 465 lower house members are women, showed widespread sentiment that higher female representation is needed.

But more women than men felt that the current number was insufficient and that stereotypes against women existed in the Diet, according to the survey.

"Whether it is women, LGBT people, ethnic minorities, people with disabilities, it is important for them to be part of the political world," Doi said in an interview. "The Diet must reflect society, including minority voices."

Japan ranks 147th in political empowerment among 156 countries in the World Economic Forum's 2021 Gender Gap Index. Women represent 14.4 percent of all Diet members, including 23.1 percent in the upper chamber.

Doi argues societal pressure is key to bring change in a straight male-dominated system, and that the candidate selection is a testament that calls for more gender equality -- such as introducing a quota system for women -- is working.

"It is said that if at least 30 percent of seats are held by women, it would change the parliamentary environment and help women's voices be reflected in policy," she said.

In Sunday's election, opposition parties achieved high female candidate ratios like the Japanese Communist Party and the CDPJ with over 50 percent, followed by the Democratic Party for the People just a hair above 40 percent.

The LDP is lower at 23.2 percent, but it reached its goal of having women represent 30 percent of its candidates in the proportional representation.

One is Arfiya Eri, 33, a polyglot of Uyghur descent, who wants Japan's politics to reflect the country's diversity. In a recent public live stream, she said, "The more visible, different kinds of lifestyles are to us, the more capable we are of imagining other people's lives and other people's needs."