Electronics developers and other technology companies in Japan are working to quickly roll out systems that can contribute to ending a recent spate of summertime incidents involving children being left behind in dangerously hot vehicles.

Cybernetech, an electronics developer based in Nogata, Fukuoka Prefecture, is in the process of designing a system that can detect when a child has been left behind, as was the case last summer in the nearby city of Nakama, where a 5-year-old boy died of heatstroke after being left alone in a nursery school shuttle bus.

The prototype has a built-in sensor that can determine whether anyone remains on a bus or in the driver's seat, while monitoring the temperature in the vehicle and whether it is in motion. Cybernetech began demonstrating its "left-behind detection system" at kindergartens in Nogata at the end of last year. 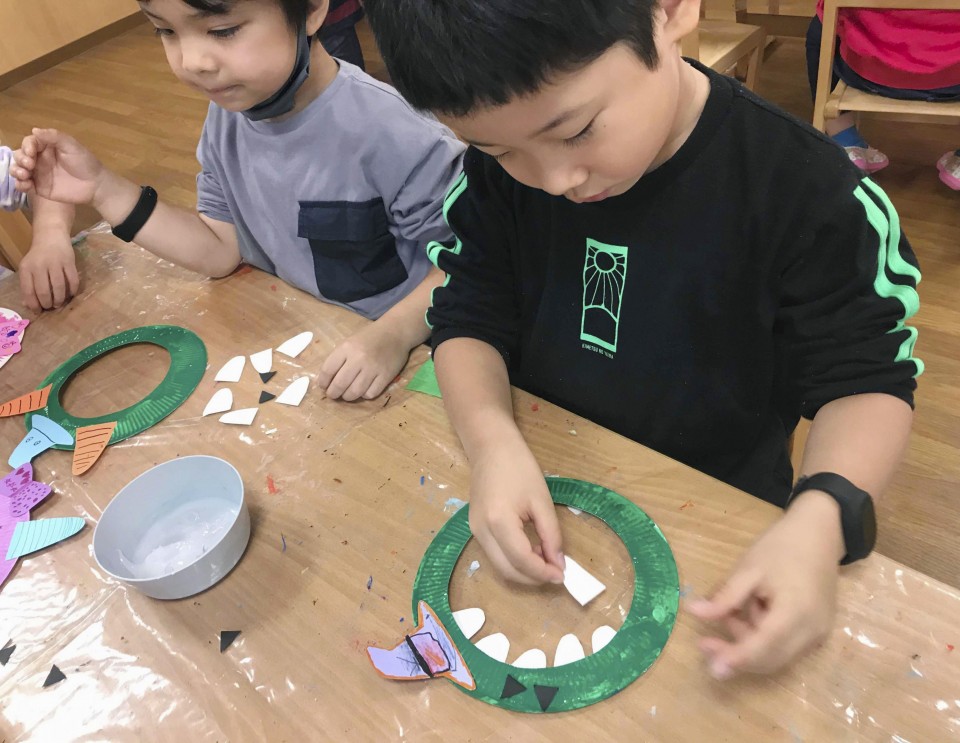 The nursery can access a computer program to assess the situation inside the vehicle, with data transmitted wirelessly. If a child left on a bus presses a "call switch," an alert sounds via the computer to warn nursery staff of the situation.

"Even for nursery facilities that are busy, they are able to regularly check on the situation in a bus. They need to think ahead about how to immediately save a child who has been left behind," said Ryo Sasaoka, 41, the company's managing director.

Proponents of introducing such technology at nurseries and kindergartens, which regularly struggle to find enough staff, believe it will go some way to averting another tragedy.

Since last fall, Kiitos, a nursery operated by Highflyers in Chiba, near Tokyo, has been testing a wrist watch-type device from Toppan Printing Co., adopting a system developed to manage factory workers. Not only can it be effectively used to monitor the whereabouts of a child, but it also tracks biometrics like the wearer's pulse and blood pressure, among other indicators of physical health. 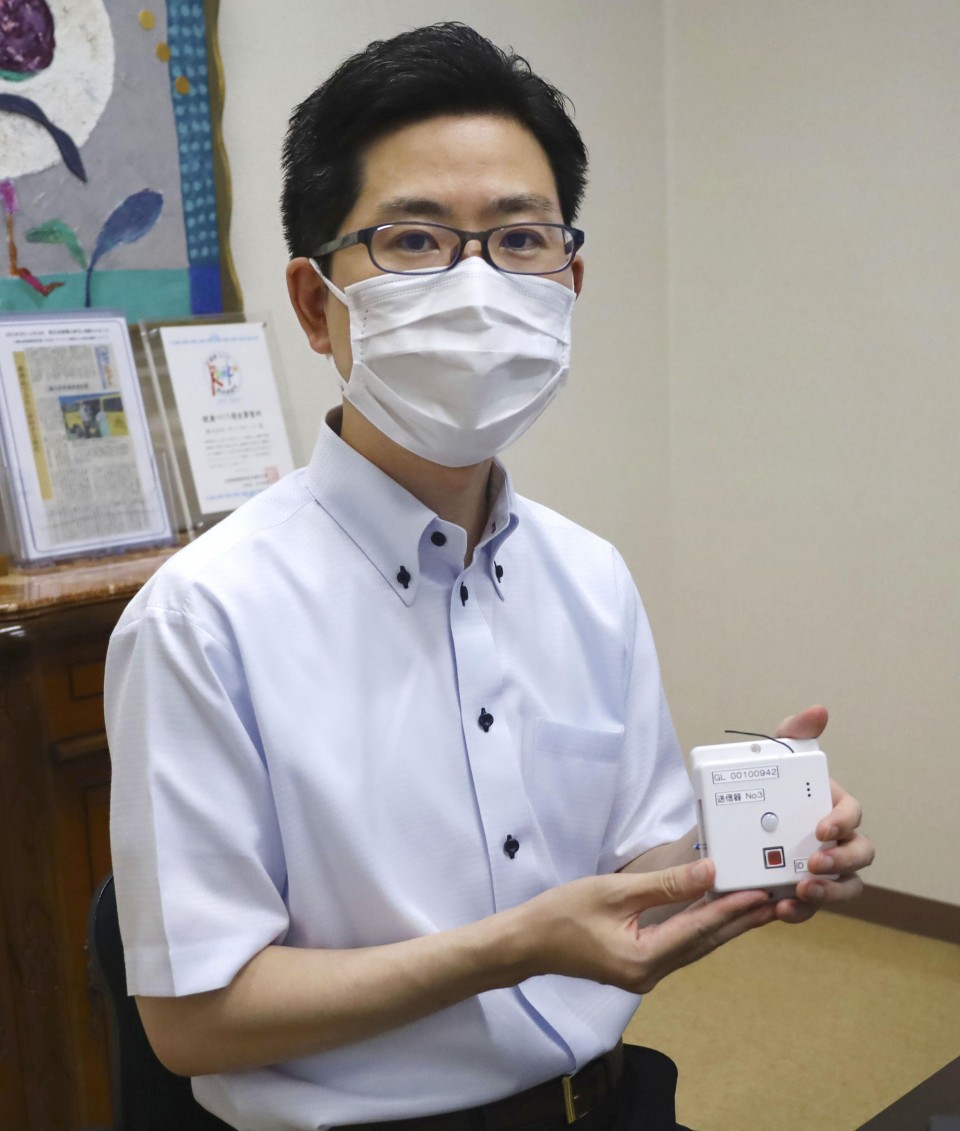 Photo taken in June 2022 in Nogata, Fukuoka Prefecture, shows Cybernetech Managing Director Ryo Sasaoka holding the "left-behind detection system," which is being developed by the company to determine when a child has been left alone on a school bus or other vehicle. (Kyodo)

"The best thing is if a nursery staff member notices (a change). We have come up with a system that doesn't only depend on people and hope we can decrease the possibility of accidents even a little bit," said Ariho Hamano, 28, a Highflyers representative.

Despite understanding the important role such technology can play, a father in his 30s whose child attends Kiitos said "it is very important how the biometric data are handled."

Companies overseas have introduced systems that detect if a child has been left behind on a school bus or in a car. Sanyo Trading Co., based in Tokyo, is preparing to unveil sensors to the Japanese market developed by European companies which can be installed on buses. 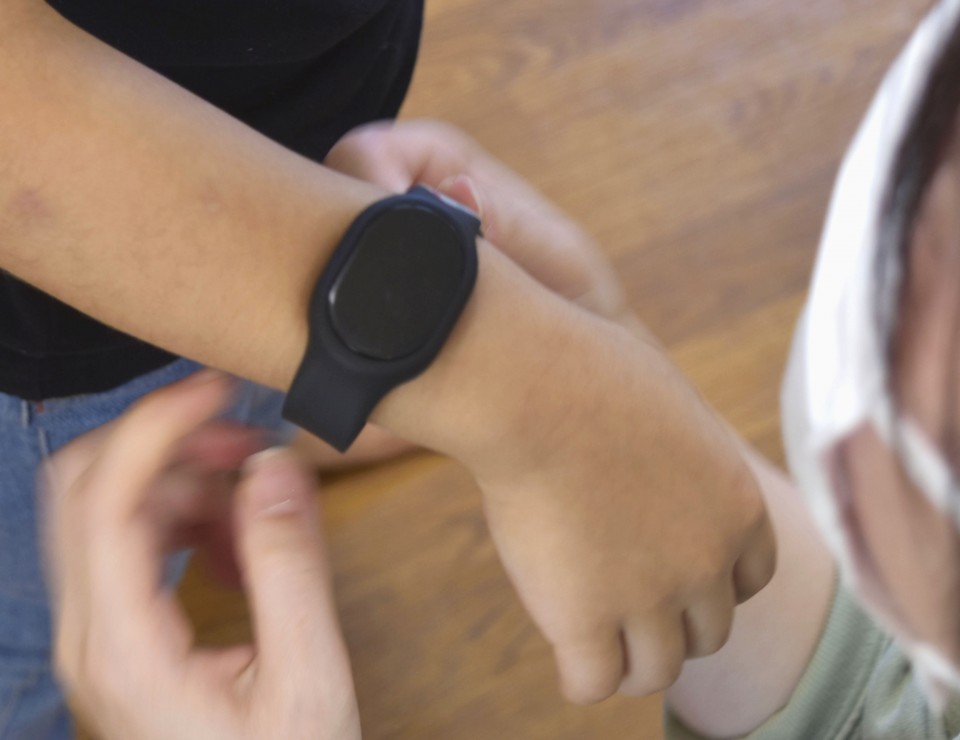 Photo taken in October 2021 shows a wrist watch-type device worn by a child at a nursery in Chiba Prefecture to help nursery staff keep track of their whereabouts, such as if a child has been left behind on a school bus or other vehicle. (Photo courtesy of Highflyers)(Kyodo)

Professor Masako Maeda from Kobe's Konan University, an expert on nursery school monitoring systems, suggested that although expectations are high that technology can reduce accidents, there is no silver bullet.

Being conscious of safety is first and foremost, she said, "It's necessary to understand what risks there are at the site."

She added that nursery staff must be trained to avert accidents and helped to find more time to spend interacting with children. "IT should be used for handling paperwork and other miscellaneous tasks" so the burden on child care workers can be lightened.