Expected to play a key role for Japan during the World Cup in Qatar starting in November, Takumi Minamino left English giants Liverpool over the summer in search of regular playing time -- at Monaco where he had a trial as a teenager.

Entering his prime at the age of 27, the attacker is determined to shine in the principality where his dream to succeed in Europe first really began to take shape.

"I thought I wanted to play here one day," said Minamino as he was unveiled this month by his new French Ligue 1 club, with whom he trained for two weeks as a 16-year-old while he was with Cerezo Osaka's youth setup. 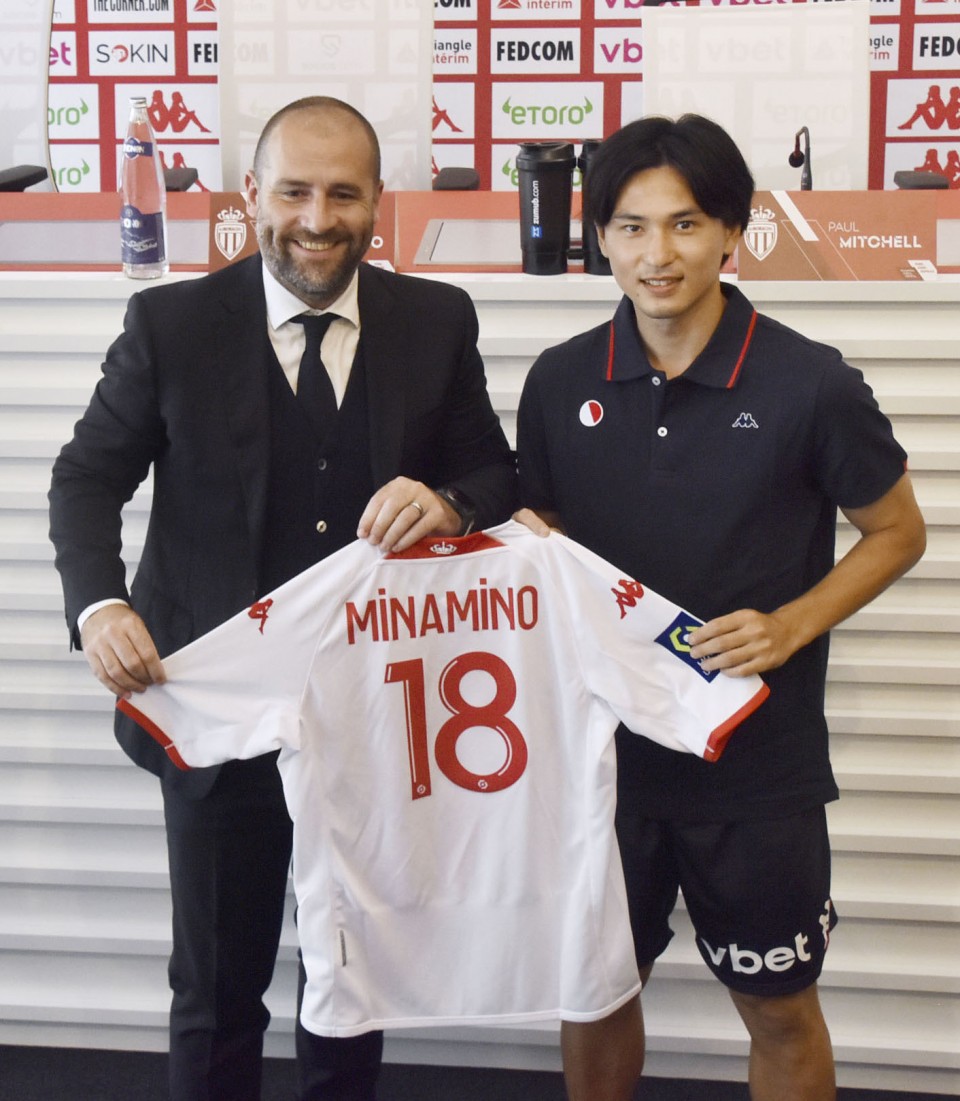 "The football went well, but I couldn't speak English or French at the time and have a lonesome memory of not being able to communicate with other players."

"But it also made me rethink what I would need to adapt to playing overseas, such as learning other languages and cultures."

Last season was Minamino's best on Merseyside as Liverpool won both domestic cups, with Minamino their top scorer in each competition.

He also had an impact in the league with his goal in the Premier League's penultimate fixture keeping Liverpool in an epic title race with Manchester City until the final day.

"It's been a really good, unforgettable experience," Minamino said of his time with Liverpool and under Klopp. "I won a few titles with him and with wonderful teammates." 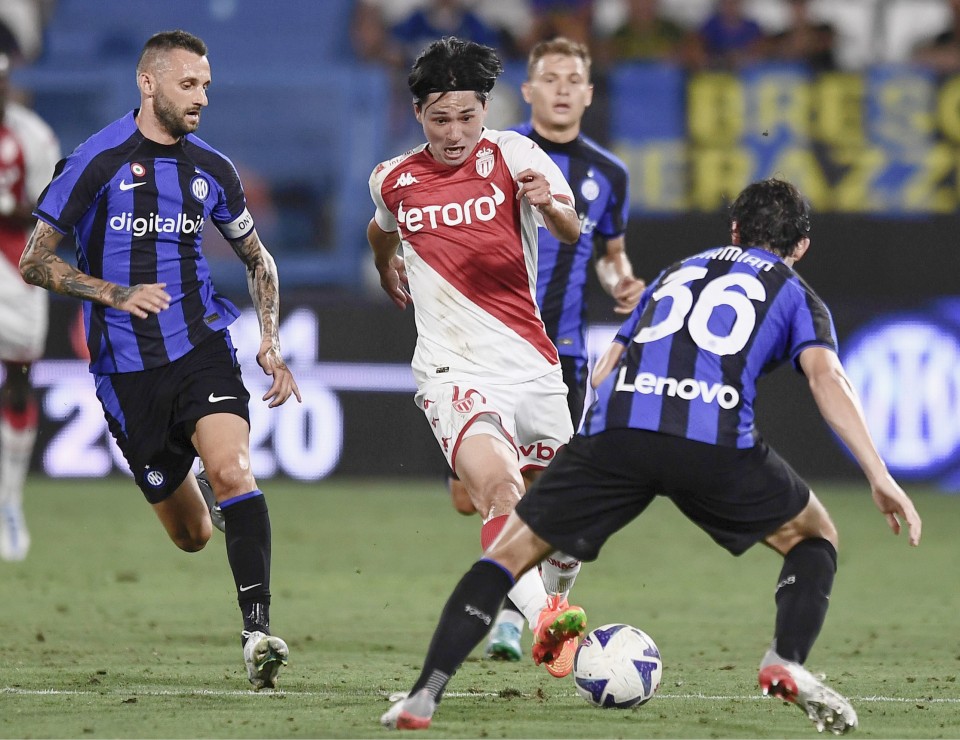 Monaco's Takumi Minamino (C) dribbles during a preseason friendly match against Inter Milan on July 16, 2022, at Ferrara, Italy. (For editorial use only)(Kyodo)

"I wasn't in a position where I could play constantly of course, but I really felt he (Klopp) sent me out to the pitch with 100-percent confidence when he did, and I wanted to contribute for him and the team because of that. It was a wonderful relationship."

Minamino said Monaco's desire to sign him was the main factor behind his move.

"Monaco were the first club to approach me," he said. "I felt I wanted to build a new career at this wonderful team."

Minamino vowed to keep up his scoring touch at Monaco, who begin their season with a Champions League qualifier first leg at home to PSV Eindhoven on Aug. 2 before facing Strasbourg away four days later in their Ligue 1 opener.

"I want as many goals and assists as I can. I think that's what's most expected of me," Minamino said. "I believe I'll be seen as an experienced player within the side. I want to help my teammates approach big games, act as a calming figure and provide a positive influence to the team, starting from daily training."

"I feel most comfortable playing behind the striker, but I can play on either flank and as a striker too. I enjoy whatever attacking position I'm in." 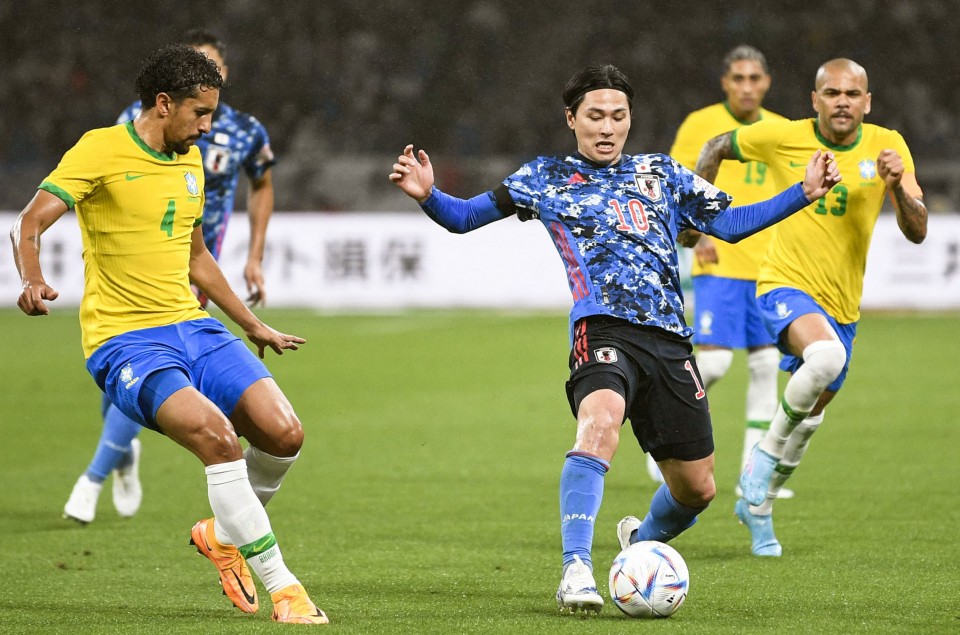 Japan's Takumi Minamino (C) controls the ball during an international friendly match against Brazil on June 6, 2022, at National Stadium in Tokyo. (Kyodo)

Minamino, who has been used predominantly on the left wing by manager Hajime Moriyasu, eyes carrying his club performances to the big tournament in Qatar.

"I'm thinking about being in peak condition ahead of the World Cup, but I want to commit to Monaco first and give everything I have and contribute," he said.

"If I can continue that, I think I can naturally go into the World Cup on a good run of form."