All wrestlers from the Sadogatake and Tamanoi stables have withdrawn from the ongoing Nagoya Grand Sumo Tournament for coronavirus-related reasons, the Japan Sumo Association said Wednesday.

No. 2 maegashira Kotonowaka, one of 49 wrestlers from the two stables who either caught the virus or came into close contact with someone testing positive, had been in contention for the championship with a 7-3 record at the 15-day Dolphins Arena meet. 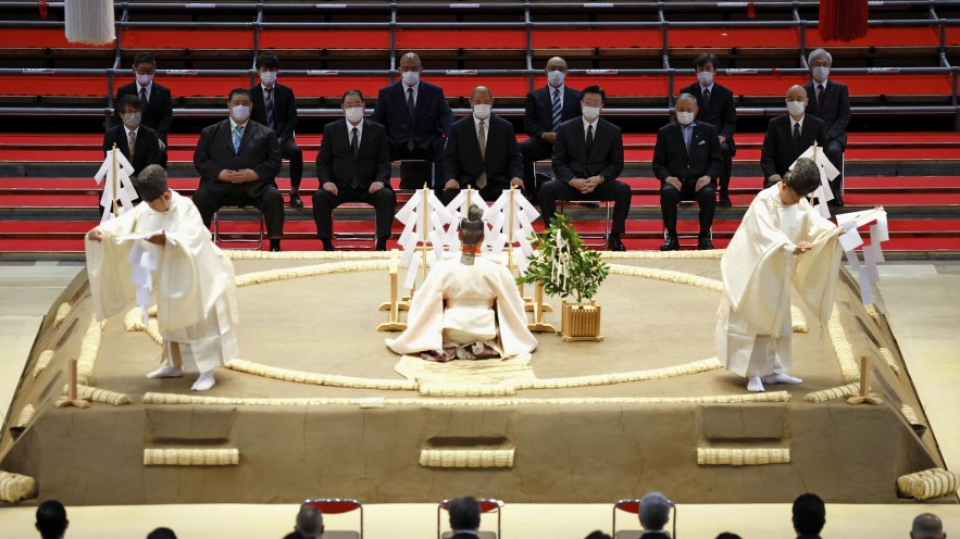 A ceremony is held at Dolphins Arena in Nagoya on July 9, 2022, to pray for the safety of the 15-day Nagoya Grand Sumo Tournament starting the following day. (Kyodo) ==Kyodo

The Sadogatake stable, where Kotonokawa lives and trains with his stablemates, has 25 wrestlers competing at all levels in Nagoya, the second most among the sport's 43 stables. Tamanoi has 24.

The Nagoya tourney is the first in over two years to open with no restrictions on the number of spectators allowed into the venue.

It is the fifth straight day a sumo stable has had to take the extreme step, bringing the growing list of absent stables to seven, including Tagonoura stable whose wrestlers were forced to sit out the tourney from Day 1 due to COVID precautions.

A total of 125 wrestlers in the current banzuke have been affected by the contagious disease and the climbing infection rate.