World-famous K-pop boy band BTS said its members will be focusing on solo projects, the group said in a video posted on YouTube Tuesday, but their agency later calmed fans' nerves by clarifying that there will be no hiatus.

"Right now, we might be stopping for a break and being lazy but that's all for the future ahead of us," RM, the leader of the seven-member band, said in Korean during the hourlong video.

No information was provided regarding the length of the pause or when it would begin. 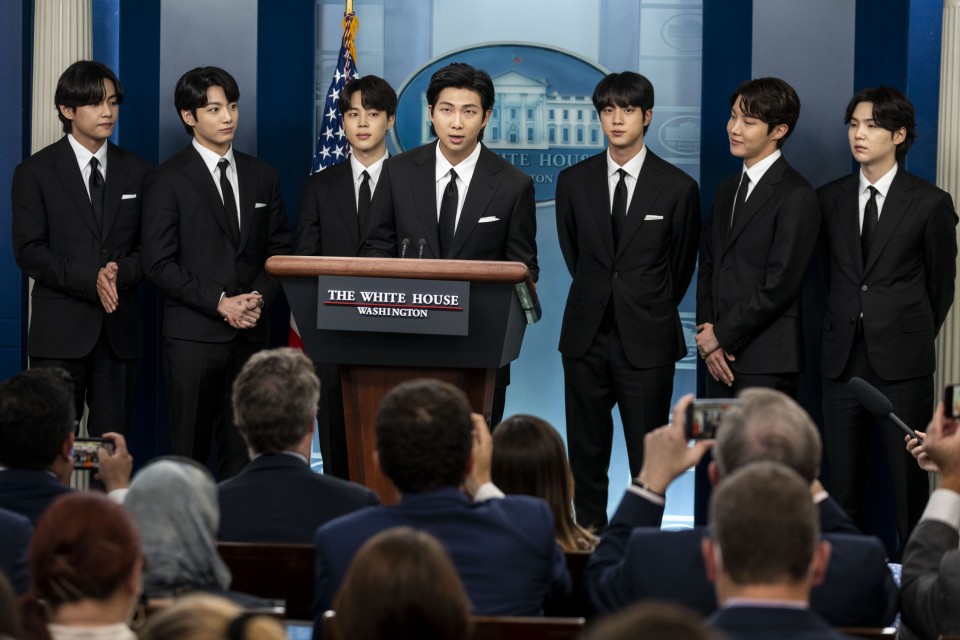 Members of the South Korean pop group BTS speak at a White House press briefing on May 31, 2022, in Washington. (Los Angeles Times/Getty/Kyodo)

But Big Hit Entertainment Co., the South Korean entertainment company behind BTS, later said in a statement that while the members -- RM, Suga, J-Hope, Jung Kook, V, Jin and Jimin -- will be focusing more on solo projects, they will still be working as a group.

The word "hiatus" was used in the English subtitles on YouTube, causing panic among the group's rabid fanbase.

In the video, the seven sat down for a group meal and discussed the group's future.

"I always thought that BTS was different from other groups, but the problem with K-pop and the whole idol system is that they don't give you time to mature," RM said.

The South Korean band became the first K-pop act to top the Billboard album charts in 2018. Its hit song "Dynamite" received a Grammy Award nomination in the best pop duo/group performance category in 2020.

Since debuting in 2013, the band has churned out hit singles including "Butter" and "Permission to Dance," with the latter's music video filmed in the U.N. General Assembly. The group has raised its profile overseas in recent years via social media.

Their announcement, which came after the release of their new album "Proof" on Friday, shocked fans in Tokyo.

In the capital's Shinjuku Ward, a video clip of BTS was shown on a large screen to mark the release of the album. BTS has a large following in Japan and around the world, and has won fans of all ages.

"I feel sad, but this is not a breakup," said Haruka Toyoda, who has been a fan since she was a first-year junior high school student.

Now a university student living in Yokosuka, Kanagawa Prefecture, near Tokyo, the 19-year-old Toyoda said she has been crying since the announcement.

But she said she wants to take the positives from the news as she would now see them more active as solo artists.

"I can't sort out my feelings just yet," said a 45-year-old fan from Kashiwa, Chiba Prefecture.

Jung Kook, the youngest and main vocalist of the group, assured fans, "We promise we will return someday even more mature than we are now."

The band has also collaborated with foreign artists such as Coldplay and Ed Sheeran. With their growing worldwide fame, the South Korean culture minister urged that the artists be exempted from the country's mandatory military service, according to Yonhap News Agency.

BTS is also known for singing lyrics with messages on social issues.

In 2018, the group delivered a message at an event at the United Nations headquarters aimed at promoting the idea that young people believe in themselves. Last month, they met with U.S. President Joe Biden at the White House and spoke about the need to eradicate hate crimes.