Rugby players from Tonga and Japan competed in a charity match Saturday for Tonga's reconstruction in the wake of January's undersea volcanic eruption and tsunami that devastated the island nation.

Japan-based Tongan-born players suited up for the Tonga Samurai Fifteen at Tokyo's Prince Chichibu Memorial Rugby Ground against a team that included candidates for Japan's national team, the Brave Blossoms. 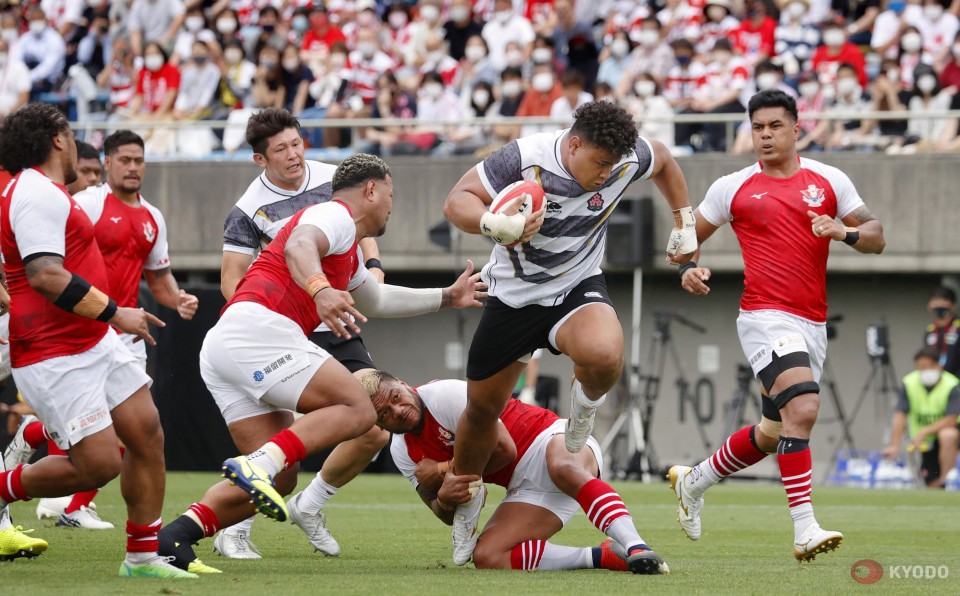 Rugby players from Tonga and Japan compete in a charity match for Tonga's reconstruction at  Prince Chichibu Memorial Rugby Ground in Tokyo on June 11, 2022. (Kyodo)

Around 8,000 fans attended the game that ended with players from both teams gathering in a circle and offering their prayers for Tonga and its people. Over 2.9 million yen ($21,000) in donations were collected at the stadium.

At both the start and conclusion of the game, won 31-12 by the Japanese, the Tongan players performed their nation's Sipi Tau traditional war dance. This finished with the players gesturing as if to draw and wave a sword, while screaming "kansha! (thanks)."

Befitting a match between players from nations whose rugby bonds have been strengthened over a period of more than 40 years, the fans got into it as the action approached the try line, with their rhythmic clapping reverberating through the venue.

"Tonga is really a small country. We wanted to put on a good show," said 32-year-old Tonga-born prop Isileli Nakajima, who played for Japan at the 2019 Rugby World Cup.

"I'm so appreciative of the deep relationship between Japan and Tonga," he said.