A U.S. law broadly banning imports from China's Xinjiang region took effect Tuesday, a move aimed at adding pressure over Beijing's alleged use of forced labor among the Uyghur minority that could pose supply chain challenges.

The Uyghur Forced Labor Prevention Act, which was signed into law in December, is certain to further strain relations between the world's two largest economies as their rivalry intensifies in the military, trade and technology fields.

"Addressing forced labor and other human rights abuses in the People's Republic of China and around the world is a priority" for the U.S. government, Secretary of State Antony Blinken said in a statement, adding that Washington is rallying its allies and partners to make global supply chains free from the use of forced labor. 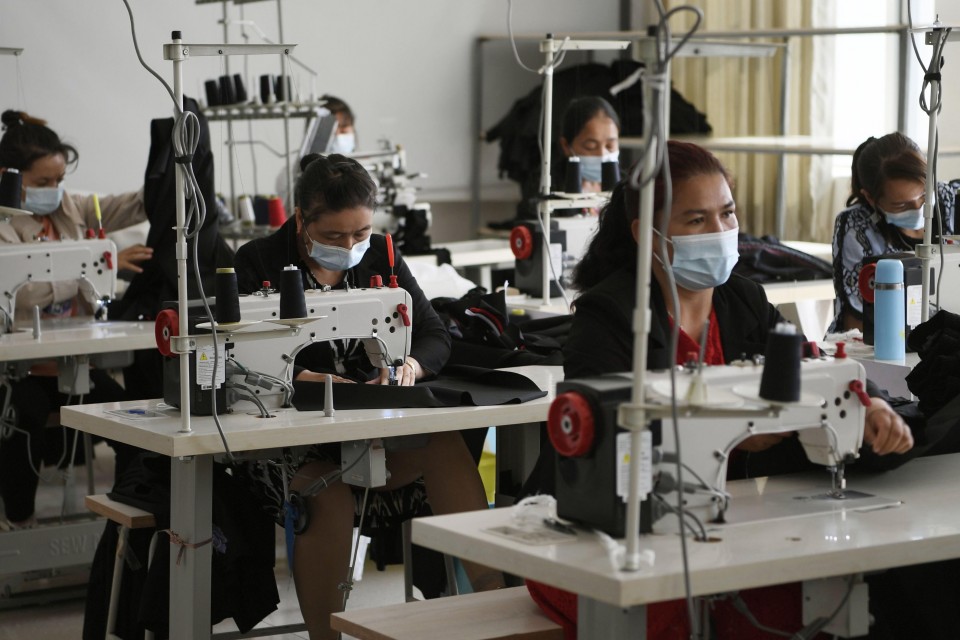 Uyghur workers and others work in a sewing factory in China's Xinjiang region in May 2021. (Kyodo)

The U.S. government had imposed import bans targeting certain products and companies over forced labor concerns in China, but the latest law has a wider coverage, applying to "any goods, wares, articles, and merchandise mined, produced, or manufactured wholly or in part in the Xinjiang Uyghur Autonomous Region."

China has denied allegations of forced labor and other abuses in the far-western Xinjiang region, a major cotton-producing area and a key supplier of solar panels.

Calling the allegations a "huge lie" to denigrate China, Foreign Ministry spokesman Wang Wenbin said Tuesday the "reality" in Xinjiang is that cotton and other industries rely on large-scale mechanized production and the rights of workers of all ethnic groups in Xinjiang are duly protected.

"China strongly condemns and firmly opposes these acts and will act forcefully to uphold the lawful rights and interests of Chinese companies and nationals," he added.

Under the law, U.S. customs authorities presume goods manufactured in Xinjiang have been made with forced labor, banning their importation unless there is "clear and convincing" evidence to the contrary.

The presumption also applies to goods made in or shipped through China and other countries that include materials produced in Xinjiang.

Shipments within the scope of the law will be detained by U.S. Customs and Border Protection. Importers may respond to the detention notice, generally within 30 days, to request an exemption to the presumption.

The move is the latest in a series of efforts by the U.S. government to ensure that the country's supply chains are free from the forced labor of Uyghur Muslims.

Under the 1930 Tariff Act, which prohibits the importation of merchandise produced with forced labor, the administration of President Joe Biden imposed an import ban last year on a key solar panel material supplied by a Chinese company located in Xinjiang.

The company filed a protest, but it was rejected due to what the authorities viewed as a lack of substantial evidence that the items did not involve forced labor.

With the new law taking effect, a Japanese company source expressed concern over whether it would be possible to provide sufficient evidence to convince U.S. authorities to grant an exemption.

In Xinjiang, more than one million Uyghurs and members of other Muslim minorities are believed to have been held in internment camps, where there has been widespread forced labor, according to the State Department's report on human rights practices.

The Biden administration has slammed forced labor as "modern-day slavery" and asserted that Chinese companies are profiting from abuses by attempting to sell cheaply made goods to consumers in the United States and other countries.

China insists that what the United States calls detention camps are vocational training centers established to combat terrorism and religious extremism, urging Washington not to interfere in its "internal affairs."