Japan will aim for high-speed fiber-optic networks to cover 99.9 percent of households before the fiscal year to March 2028 ends, a government policy showed Wednesday.

The plan is a key pillar of Prime Minister Fumio Kishida's vision to ensure not just major cities but also regional areas can have smooth access to digital services in everyday life. Japan has been seen as a laggard in digital transformation globally and the COVID-19 pandemic made the contrast clearer.

Other targets in the policy include increasing the number of people who have expertise in digitalization, such as data scientists, by 2.3 million to 3.3 million in total by the end of fiscal 2026. 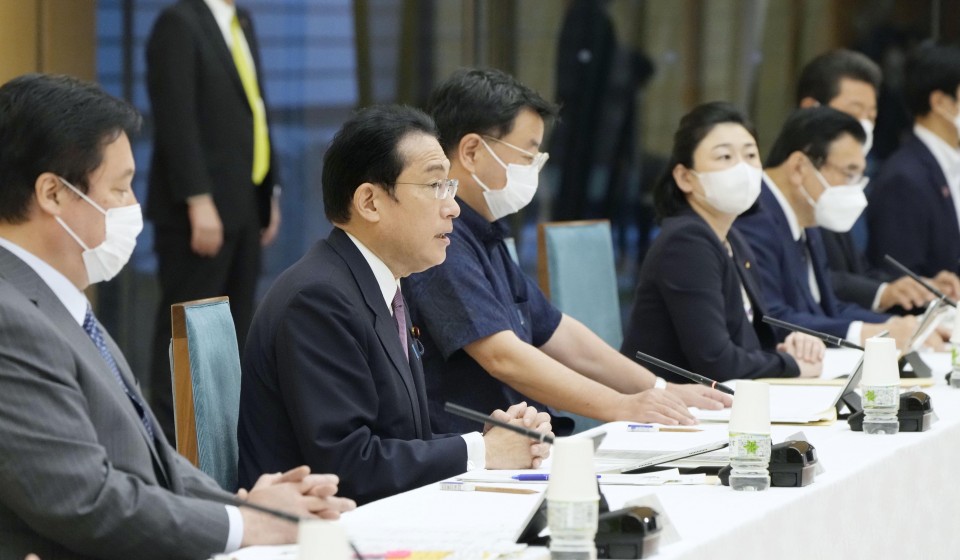 Prime Minister Fumio Kishida (2nd from L) attends a meeting of a government panel tasked with pushing the digitalization initiative at his office in Tokyo on June 1, 2022. (Kyodo)

"Now that we have the policy, it is time to make whole-of-government efforts to realize the vision and produce visible results," Kishida told a meeting of a panel tasked with pushing the digitalization initiative.

The government is counting on digitalization as a means to help solve challenges faced by an aging society and depopulation in rural areas. It also hopes to make digitalization a growth driver for the economy and create jobs in regional areas, which would encourage more people to move from highly populated cities like Tokyo.

The policy was drawn up after months of discussions by the panel since Kishida became prime minister last year.

The idea of revving up regional economies with the help of digitalization is not new and Kishida's predecessors -- Yoshihide Suga and Shinzo Abe -- have also placed importance on digitalization.