A project that gives young people who stutter real-world work experience as waitstaff has taken root in Japan, giving people with the speech impediment opportunities to build confidence with strangers.

The project, named "Cafes Where Orders Take Time," takes over existing cafes for a day at a time and hopes to promote a wider understanding of the condition while helping people who stutter achieve their life goals. 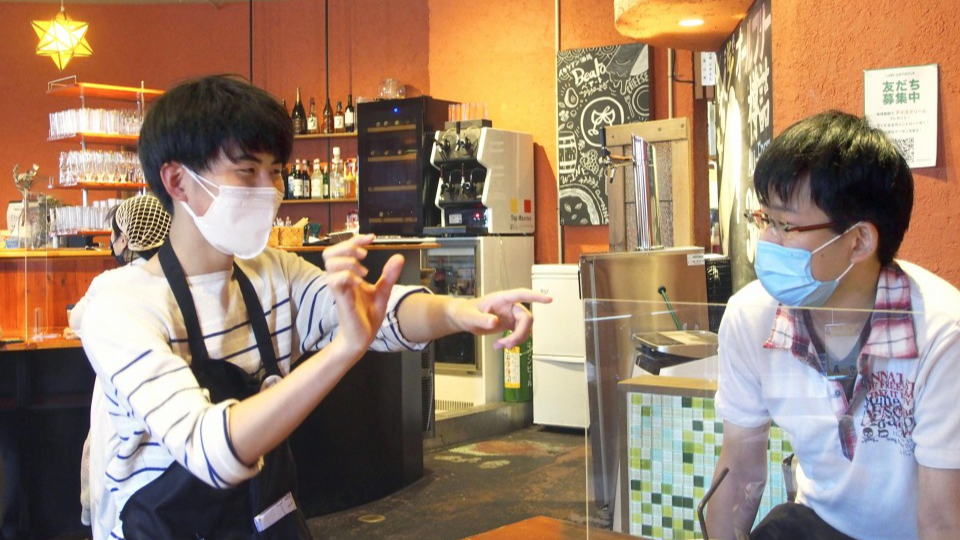 Photo taken on June 5, 2022, shows server Hitonari Nakazawa (L) enjoying a conversation with a customer during an event held in Toyama, central Japan, for young people who stutter to gain real-world work experience as waitstaff. (Kyodo)

At a cafe in the city of Toyama, central Japan, in June, four young waiters worked while wearing face masks bearing printed messages such as "I want to talk with many people" and "Please let me finish speaking."

As a rule, customers were asked not to hurry or interrupt their servers if they stuttered while taking orders -- even to give what they believed to be friendly encouragement such as "relax" or "slow down." 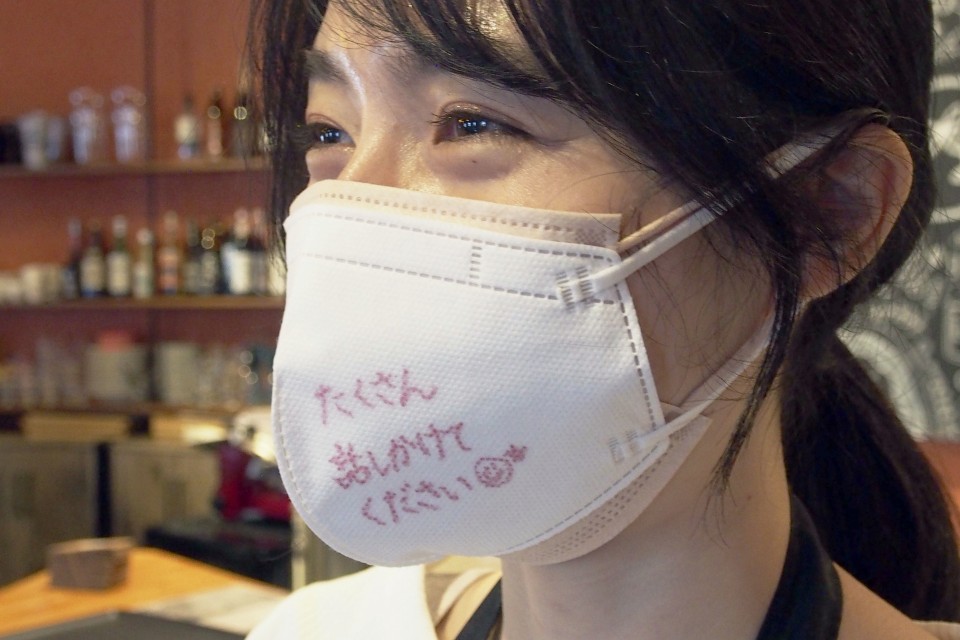 Photo taken on June 5, 2022, shows a server with a mask bearing the message, "Please talk with me a lot," during an event  called "Cafes Where Orders Take Time," held in Toyama, central Japan, for people who stutter. (Kyodo)

Amid the cafe's welcoming atmosphere, many customers were happy to listen to staff talk about facing their anxieties and difficulties with stuttering.

The group of waiters included Hitonari Nakazawa, an 18-year-old high school student from Tsunan, Niigata Prefecture, who said, "I had avoided speaking to other people as much as possible, but today I was able to really enjoy my conversations."

Another staff member, Marin Kanamori, 21, a third-year student at the University of Toyama, said, "I took this as an opportunity to encourage myself to speak."

"I would like to become a speech therapist in the future," she added.

Stuttering, also known as dysfluency, affects some 1.2 million people in Japan. It is a speech impediment in which the first sound is involuntarily repeated or prolonged.

Many develop the disorder in early childhood and usually see improvements or a resolution over time, but it can lead to bullying or social anxiety because of a lack of acceptance.

U.S. President Joe Biden is one of the world's more prominent stutterers and has often spoken about the tactics he used to overcome it on his rise in politics.

One of the approximately 40 customers who visited the cafe, Toyama resident Mitsuko Kondo, 52, said, "I learned it is important to get to know each person and try to understand them." 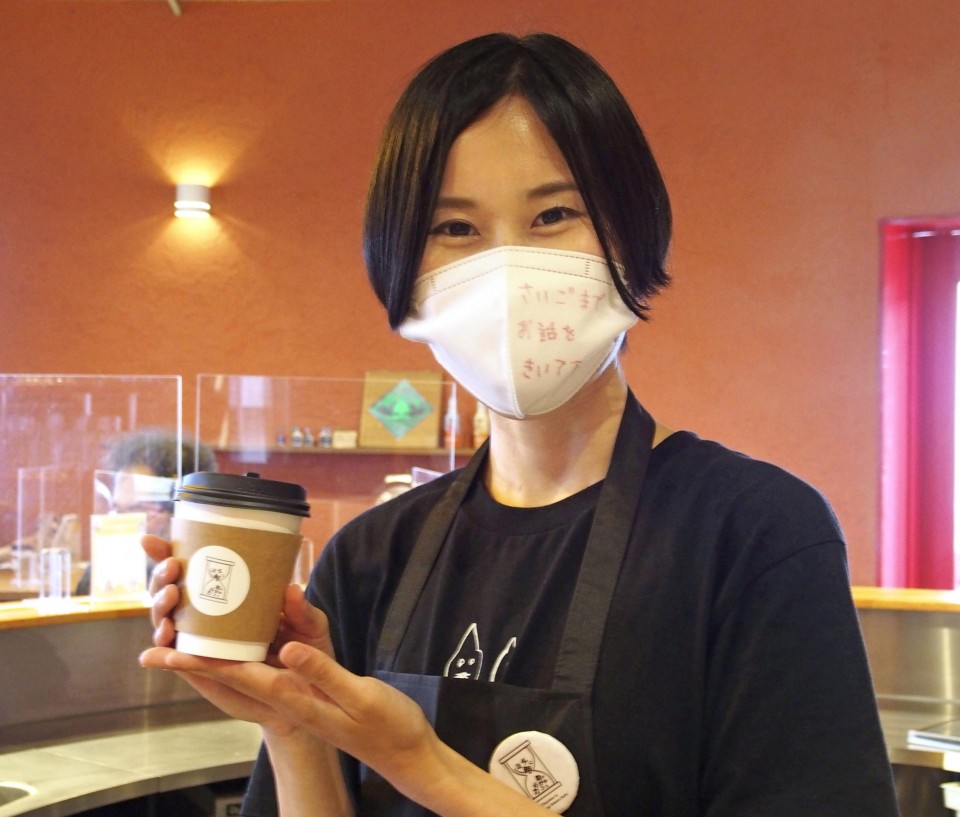 The idea of taking over an existing cafe for one day to help stutterers is the brainchild of Arisa Okumura, 30, from Tokyo, who worked as one of the four waitstaff.

As a child, Okumura was teased by other kids who would tell her they feared they'd "catch my stutter if they touched me." Before she knew it, she was avoiding conversations with others so her affliction could go undetected.

But Okumura dreamed of working in a cafe. She traveled to Melbourne, Australia, a city known for its cafe culture, when she was 24 years old. At one of the local cafes, she enjoyed working with co-workers, including disabled or homeless people and those who could not speak English. Wishing to replicate the experience in Japan, she launched her plan when she returned in 2017.

Yoshikazu Kikuchi, a 44-year-old doctor who treats people who stutter at Kyushu University Hospital in Fukuoka, stressed the importance of creating a society that is accepting of people struggling with speech disorders because there are "limits to treating everyone." The cafe's endeavor is "highly meaningful in helping create a society that accepts diversity," Kikuchi, who also suffers from dysfluency, said.

According to Kikuchi, it was formerly thought that one of the main causes of stuttering was exposing children to strict discipline, but nowadays, the predominant view is that about 80 percent of sufferers develop the impediment due to their physical or genetic makeup.

The cafe event has been conducted twice in Tokyo, and Toyama, on the Sea of Japan coast, was the first to hold it outside the capital.

Okumura said she is planning to host future cafe events in Mie and Nagano prefectures as chances for people with the condition to get together and share their problems are rare outside big cities. More events are scheduled to take place in Tokyo and Kawasaki, Kanagawa Prefecture, this summer.

"I will strive to create a society in which young people struggling with stuttering can challenge the things they really want to do and never quit," Okumura said. 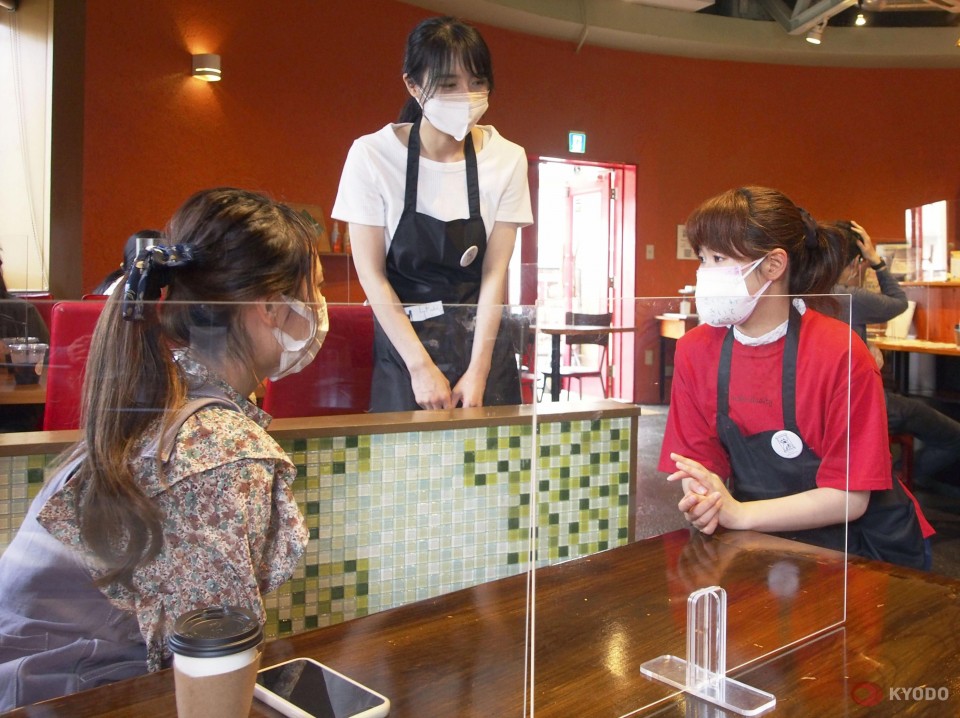