The first meeting of parties to a U.N. treaty banning nuclear weapons will conclude with an action plan pledging cooperation with nonsignatory countries affected by such weapons as it charts a course for their abolition, a draft obtained by Kyodo News showed Wednesday.

Japan, the only country in the world to have experienced the horrors of nuclear weapons in war, has not signed the Treaty on the Prohibition of Nuclear Weapons and did not join the meeting that started Tuesday in Vienna, even as an observer, despite high expectations among survivors of the Hiroshima and Nagasaki bombings that it would.

While the eight-page draft of the action plan dated June 8 did not mention specific countries, it appealed to nonsignatory states to support the nuclear ban treaty and pledged to cooperate closely with them to achieve its goals, including providing relief for people who have been physically affected by nuclear radiation. 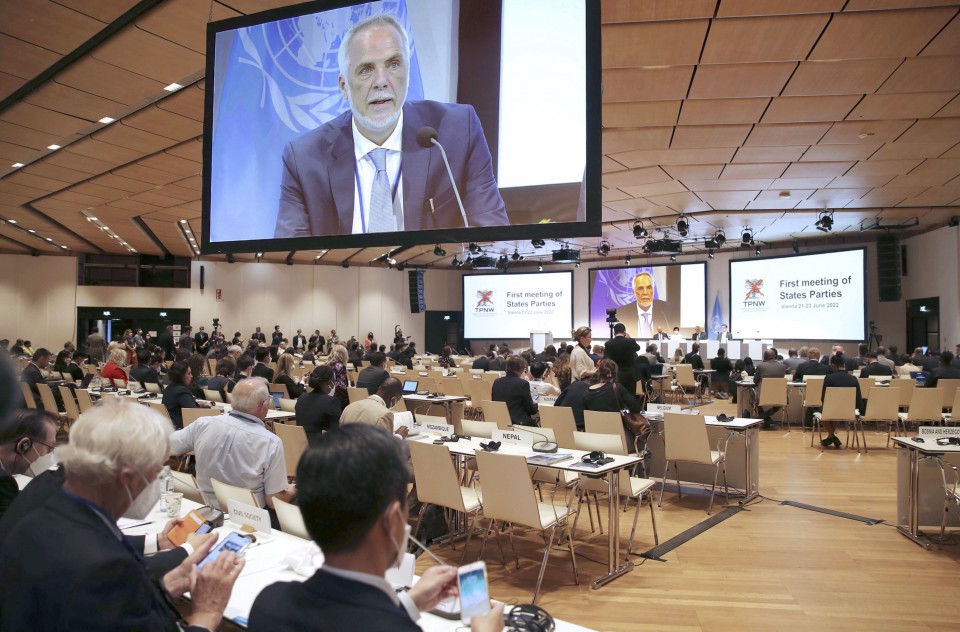 Photo taken in Vienna on June 21, 2022, shows the first meeting of state parties to the Treaty on the Prohibition of Nuclear Weapons. (Kyodo)

Other nonsignatory countries such as Germany, Norway, the Netherlands and Australia, which was the site of British nuclear tests, have joined the meeting expected to conclude Thursday as observers.

The treaty, which took effect in January last year, is the first international pact outlawing the development, testing, possession and use of nuclear weapons.

But the five recognized nuclear weapons states -- Britain, China, France, Russia and the United States -- have opposed the treaty, saying it ignores security threats that the countries face.

Japan has stood aligned with the United States as it has a long-standing security alliance with Washington that offers the shelter of its nuclear umbrella.

The draft emphasized cooperation between parties of the nuclear ban treaty and those of the Treaty on the Non-Proliferation of Nuclear Weapons, which includes the five nuclear weapons states.

It also pledged to select experts by the next meeting to form a scientific advisory group to deepen knowledge on the inhumanity of nuclear weapons, and called on state parties to develop legislation to provide relief to victims of nuclear tests and promote environmental restoration.

Separate to the action plan, the meeting is also expected to conclude with a political statement sounding the alarm on the accelerating expansion of nuclear arsenals.