Japan continued Tuesday to face concerns over a power crunch, with households and businesses in Tokyo being asked again by the government to reduce electricity consumption in response to a spike in demand driven by high temperatures and infrastructure issues.

An advisory which has urged people in Tokyo Electric Power Company Holdings Inc.'s service area to take reasonable energy-saving steps will be extended Wednesday for the third straight day as power supply is expected to remain tight.

The government called on people to take steps such as turning off unnecessary lights and electric devices from 3 p.m. to 6 p.m. on Monday and Tuesday. It will ask the public to do the same on Wednesday from 3 p.m. to 8 p.m. as temperatures are projected to rise further. 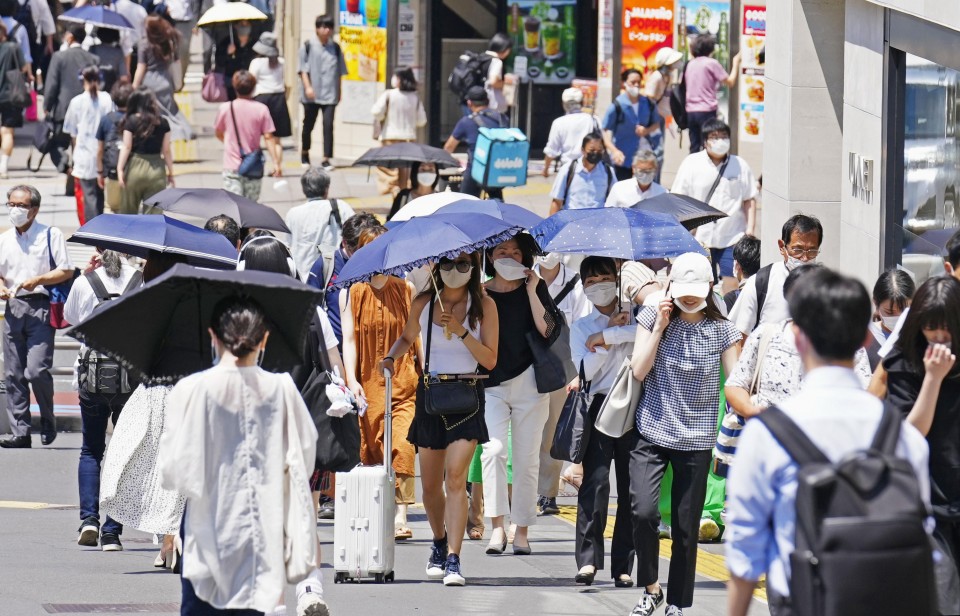 People walk the streets of Tokyo amid very hot weather on June 28, 2022. (Kyodo)

But the government is asking people to keep using air conditioners to reduce the risk of heatstroke or heat exhaustion.

Speaking after a Cabinet meeting on Tuesday, Economy, Trade and Industry Minister Koichi Hagiuda highlighted the sustained high demand for power in the evenings when calling for the public to cooperate.

He said it is "important" that Japan restarts its nuclear power stations to ensure it can meet energy requirements.

Increased supply is expected from the second half of this week or later, Chief Cabinet Secretary Hirokazu Matsuno said at a press briefing, citing projected output from power plants that will finish undergoing maintenance and periodic inspections.

Japan faces the prospect of a long, hot summer after its weather agency said Monday that the annual rainy season has recorded its earliest finish in the Tokyo area since records became available in 1951.

It also said the rainy season has been declared over for the Tokai region in central Japan and southern Kyushu.

More regions followed suit Tuesday, with the Japan Meteorological Agency saying the rainy season in all of western Japan and the Hokuriku region in central Japan also appeared to have ended.

Most of the areas also recorded their earliest finish since data became available in 1951.

Aside from the weather, factors including damage sustained by power stations in a strong earthquake that struck in March, primarily in the northeastern Tohoku region, have also compromised available capacity.

For Wednesday, the reserve power supply capacity rate in TEPCO's service areas is forecast to be 3.5 percent from 4:30 p.m. to 5 p.m.

The lowest level necessary for stable supply is said to be 3 percent.

On Monday, TEPCO as well as power companies serving Hokkaido in northern Japan and the Tohoku region issued for the first time information on how to prepare to reduce strain on supplies, which is intended to raise awareness among the public about the need to conserve energy.

Increased solar power generation and electricity saving efforts in response to Monday's government request, which asked for power conservation in the 3 p.m. to 6 p.m. window, are believed to have averted a predicted power crunch.

Numerous businesses responded to the call, with outlets of convenience store chain Seven-Eleven Japan Co. shifting the time they prepare fried foods, and businesses, including the Seibu department store in Tokyo's Ikebukuro district, switching off their large neon signage.

However, the strain on supplies is expanding to many parts of eastern Japan, and there is increasing concern the reserve rate will fall below 5 percent in the region.

The government decided Tuesday it will provide power-saving points in August worth 2,000 yen ($15) to households if they take part in a power-saving program.

The government will introduce the reward points system to reduce the burden on households of rising electricity prices propelled by Russia's ongoing invasion of Ukraine.

TEPCO's service area covers Tokyo and eight nearby prefectures including those in the Kanto region, which saw record-high June temperatures over the weekend and also the mercury rose to 35 C or higher in some areas Monday.

The heat has kept power demand extremely high in June, according to the ministry. To increase available energy supplies, it says it intends to take measures including sourcing power from other providers.