NATO's decision to specifically name China as a challenge for the first time in policy guidelines is the latest indication democracies and like-minded nations are coalescing in opposition to Beijing's growing military and economic assertiveness.

But the move may still be largely symbolic, with the 30-member security bloc preoccupied with dealing with Russia in the wake of its attack on Ukraine, and due to the likelihood the guidelines will not lead to any specific security commitments in the Indo-Pacific region. 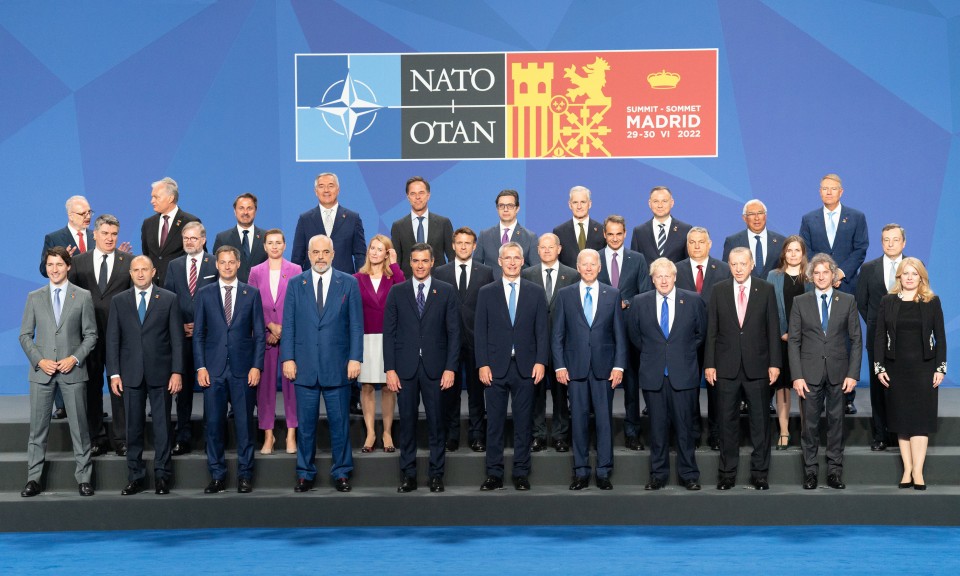 In the Strategic Concept endorsed during a summit in Madrid on Wednesday, the first document of its type since 2010, the North Atlantic Treaty Organization said, "The People's Republic of China's stated ambitions and coercive policies challenge our interests, security and values."

While refraining from calling China an adversary, the document cited a series of actions that could be considered threatening to the trans-Atlantic alliance, including Beijing's rapid nuclear arsenal buildup, cyber operations, confrontational rhetoric and the use of its economic leverage to create dependencies and broaden its influence.

"For an alliance that has traditionally focused on Russia and the European theater to be taking this new, explicit wording about China...marks a significant change," said Jeffrey Hornung, an expert on East Asian security issues at Rand Corp., a U.S. research organization.

But he also said the China reference can be viewed as "symbolism" demonstrating that European democracies and like-minded nations are siding with Indo-Pacific partners such as Japan and Australia who are increasingly concerned about Beijing's provocative behavior.

NATO was created in 1949 by the United States, Canada and several Western European nations to defend against the threat from the Soviet Union. Its role and focus has since evolved through the end of the Cold War, during which it saw membership enlargement and operations in Bosnia, the Sept. 11, 2001, terror attacks on the United States, which put its focus on Afghanistan, and Russia's annexation of Crimea from Ukraine in 2014.

It was not until 2019 that China's rise was fully taken up on the NATO agenda at a summit meeting, partly under the pressure from the administration of then U.S. President Donald Trump.

According to a report by the International Institute for Strategic Studies, a British think tank, NATO's position on China issues as recently as 2019 had been to "avoid taking joint stances," reflecting the diverging economic interests members have with Beijing, and their differing assessments of the degree to which the alliance should remain focused on threats from Russia.

But Beijing's actions have become more difficult to overlook even by countries in Europe, such as its crackdown on pro-democracy protestors in Hong Kong, human rights abuse allegations against the Uyghur minority in China's Xinjiang region, the militarization of the South China Sea and economic coercion.

Some European nations, meanwhile, have individually been stepping up engagement in the Indo-Pacific, with Britain dispatching a carrier strike group led by the Queen Elizabeth last year, and France, Germany and the Netherlands also sending naval vessels to the region the same year.

A port call by German navy frigate the Bayern in Tokyo in November marked the first visit to Japan by a military vessel from the nation in about 20 years.

Hornung said major European countries have been shifting their views on China and NATO's updated position can be seen as the security bloc "catching up finally with where the member states individually are."

But speaking in terms of actual military operations in the Indo-Pacific, only a very small number of countries in Europe, such as France and Britain, will have the capability to send forces to the region, the political scientist said.

The Ukraine war, now in its fifth month, is also certain to make NATO members wary of devoting resources to regions other than Europe as they continue to send arms to help Kyiv's fight. Fears that a resurgent Moscow may target another country in the future also remain.

As the new Strategic Concept vows to strengthen cooperation between NATO and its Indo-Pacific partners, Hornung said the change will center on more defense exchanges, including high-level talks, and more chances of collaboration in exercises. Engagement in out-of-area operations is unlikely, he believes.

NATO Secretary General Jens Stoltenberg indicated at a press conference on Wednesday that evolving ties with the Asia-Pacific countries do not make the bloc a global player, saying, "NATO will remain an alliance of North America and Europe."

Michito Tsuruoka, an associate professor of international security at Japan's Keio University, said he is not too worried that a protracted war in Ukraine may lead the European countries' interest in the Asia-Pacific region to wane.

He said there is a growing awareness among European countries that they are no longer immune from the influence of China -- after the United States, the world's second-largest economy and second-largest defense spender.

Concerns over cyber operations, emerging and disruptive technology such as hypersonic weapons and artificial intelligence are of interest to all NATO members, he said.

The academic also said the formation of a three-way nuclear submarine partnership among the United States, Australia and Britain last year, dubbed AUKUS, has been a key development that guarantees Britain's active naval presence in the region for decades to come.

In the course of helping Australia acquire submarines, British submarines can be expected to stop by for exercises, and that would mean more possibility of Britain becoming involved in military operations in the region should contingencies occur.

While NATO hailed its ability, under the new concept, to guide the alliance in a "radically changed security environment," questions remain as to whether the document will have an effective 10-year lifespan.

Taiwan, a self-ruled island that Beijing views as its own, is seen as a potential military flashpoint that could draw the United States into conflict with China. U.S. officers have said China is accelerating its military capability toward being ready to invade and seize Taiwan around 2027.

"I do think the time is coming for NATO to seriously consider whether it is enough to think Russia as the only one that needs to be deterred," Tsuruoka said.