Japan political leaders intensify debate on prices ahead of election

Japanese political party leaders on Tuesday sparred over issues ranging from surging prices exacerbated by Russia's war on Ukraine to national security, in a policy debate held a day before the start of campaigning for next month's upper house election.

Prime Minister Fumio Kishida vowed that his ruling party will prioritize the implementation of measures aimed at cushioning the impact of high energy and food prices, rather than considering lowering the consumption tax rate from the current 10 percent or seeking a change to the Bank of Japan's ultraeasy monetary policy. 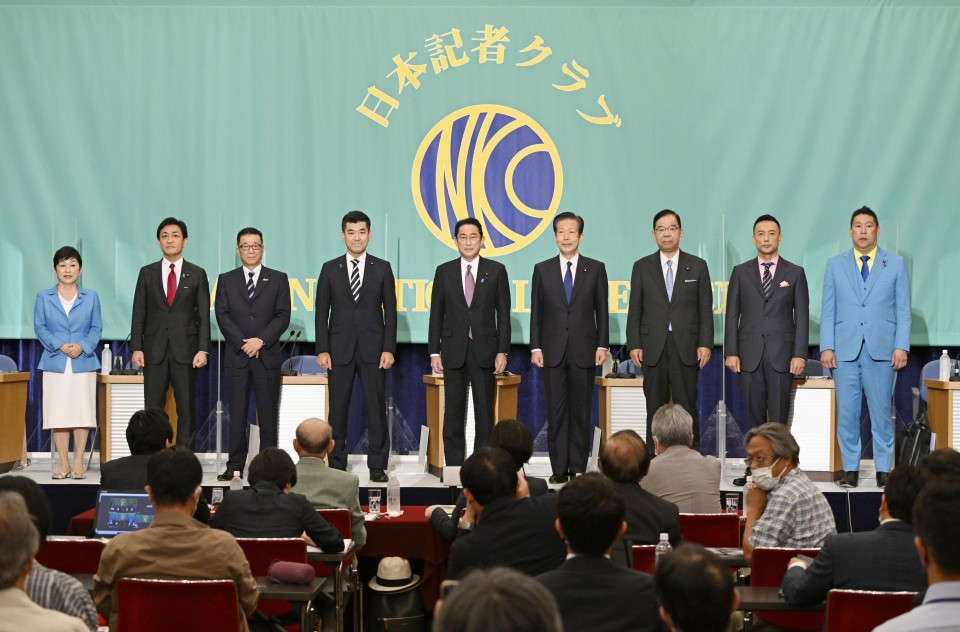 "(The tax) is a stable financial source for social security," said Kishida, who heads the Liberal Democratic Party, as he participated in the event with eight other party chiefs at the Japan National Press Club in Tokyo.

Fighting an uphill battle against the LDP in the July 10 House of Councillors election, Kenta Izumi, head of the main opposition Constitutional Democratic Party of Japan, criticized the government and the BOJ for not taking action against a weak yen and called for reducing the tax rate.

"We cannot leave rising prices as they are," Izumi said.

Meanwhile, Yuichiro Tamaki, head of the opposition Democratic Party for the People, said the debate over price increases has been too focused on monetary policy and that more fiscal measures should be taken.

Natsuo Yamaguchi, leader of Komeito, the junior coalition partner of the LDP, questioned Izumi's call for reducing the consumption tax to 5 percent, saying revenues from it have been earmarked to finance the country's swelling social security costs.

Kishida also stressed the importance of maintaining stable and constructive relations with China, which he said are important "not only for each other but also for the peace and stability of the region and the international community."

He took a positive stance on a summit with Chinese President Xi Jinping, with whom he last spoke in October, saying, "Dialogue matters."

As for South Korea, Kishida said Tokyo and Seoul "cannot move forward" unless they see progress in resolving issues such as compensation demands from South Koreans for their labor rendered under Japan's 1910-1945 colonial rule of the Korean Peninsula.

In addition, he pledged to take the lead in reforming the U.N. Security Council, whose dysfunction was exposed by Russia's invasion of Ukraine.

Amid concerns over China's growing military buildup and North Korea's nuclear and missile threats, the LDP is looking to lift the defense budget to an amount on par with 2 percent of gross domestic product or more, which is a spending target for North Atlantic Treaty Organization nations.

The Japanese Communist Party's Chairman Kazuo Shii said the LDP's desire to drastically boost defense spending will induce a "vicious cycle" of escalating regional tensions, while saying the ruling party is irresponsible that it is not explaining how to finance the increase.

In the election, 125 of the 248 seats will be up for grabs, of which 50 will be chosen under the proportional representation system and the rest from electoral districts that are largely based on prefectures.

A tally by Kyodo News shows more than 530 people planning to run in the election.