A Japanese court dismissed Monday a damages lawsuit claiming the government's ban on same-sex marriage is unconstitutional, in contrast to a historic ruling last year that recognized it as violating the right to equality.

In the suit at the Osaka District Court, three same-sex couples sought 1 million yen ($7,400) per person, arguing that the current system preventing them from getting married is "unjust discrimination." 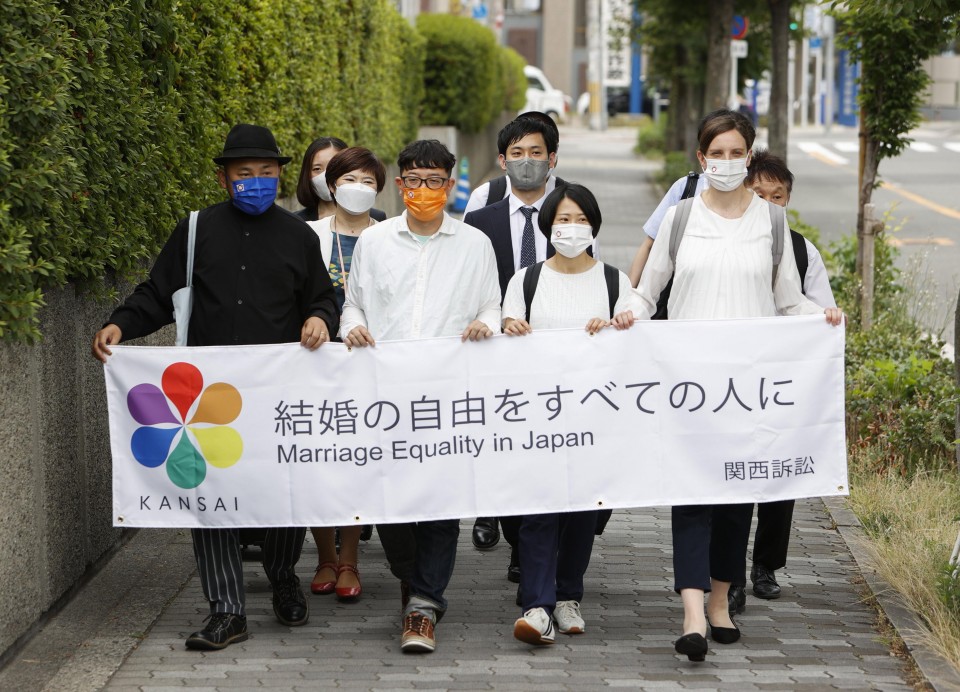 Plaintiffs of a damages lawsuit claiming the government's ban on same-sex marriage is unconstitutional head with others to the Osaka District Court in Osaka on June 20, 2022. (Kyodo)

The district court's judgment is the second ruling after couples who filed similar lawsuits on Valentine's Day in 2019 in Sapporo, Tokyo, Osaka and Nagoya. Another three same-sex couples filed a suit in Fukuoka in September that year.

Monday's decision also dealt a blow to moves in recent years toward a greater acceptance of sexual minorities. Many prefectural and local governments issue certifications recognizing sexual minority couples but they are legally nonbinding.

Dissatisfied with the ruling, the plaintiffs vowed to appeal. Machi Sakata, 43, became emotional, saying, "It is such a disappointment. I'm not convinced at all."

In the latest case, the three couples, who are in their 30s to 50s and live in Aichi, Kyoto and Kagawa prefectures, argued that same-sex marriage should be accepted in accordance with the Constitution that respects personal dignity.

The lawsuit revolved around the interpretation of marriage in Article 24 of the charter, which stipulates, "Marriage shall be based only on the mutual consent of both sexes and it shall be maintained through mutual cooperation with the equal rights of husband and wife as a basis."

Currently, such privileges resulting from marriage as inheritance rights, tax benefits and joint custody of children are only given to heterosexual couples.

Finding the ban constitutional, the Osaka court noted the disadvantages same-sex couples are facing have eased over time and that "there have not been enough discussions among people in Japan" on what kind of system is appropriate to realize benefits for such couples.

The court said, however, that the current system could be considered unconstitutional in the future depending on the social circumstances, while adding "it may be possible to create a new system" ensuring the interests of same-sex couples and which is similar to marriage.

The Sapporo District Court ruled in March last year that the country's civil law and family registration law, which do not acknowledge same-sex marriage, violate the Constitution's guarantee of equality before the law.

The ruling was hailed as a landmark for LGBTQ activists in Japan, the only Group of Seven developed nations member that refuses to recognize same-sex marriage.

But the Sapporo court rejected their demand for 1 million yen each for psychological damage caused by what they called the government's negligence in amending the law.

A team of lawyers for the three couples in the Osaka suit issued a statement saying the court did not provide any convincing reason to overturn the Sapporo ruling.

The Osaka ruling "allows the issue of same-sex marriage to be left as is until there are no more discussions, thus turning a blind eye to human rights violations," it said.

Plaintiff Akiyoshi Tanaka, 44, also said, "I felt there is a long way ahead (in our fight)." His 37-year-old partner Yuki Kawata described the court as being "weak-kneed" in handing down such a decision.

A Justice Ministry official, meanwhile, welcomed the verdict, saying, "The court recognized our claims that provisions in the civil law regarding marriage are not against the Constitution."

Over the years, an increasing number of countries primarily in Europe have legalized marriage equality, with the Netherlands the first to do so in 2001.

Around 30 countries and regions, including Brazil and Sweden, currently recognize gay and lesbian marriage, according to EMA Japan, a nonprofit organization advocating sexual minority rights. Across Asia, Taiwan legalized same-sex marriage in 2019.

Discrimination against LGBTQ individuals continues to remain deeply rooted in certain countries, however, with some in the Middle East making consensual sex a legal offense warranting death.