Parties to a U.N. treaty banning nuclear weapons called for "immediate action" to achieve a nuclear-weapons-free world as they wrapped up their first meeting Thursday.

The statement, adopted at the end of the three-day meeting of parties to the Treaty on the Prohibition of Nuclear Weapons in Vienna, said a prompt response is the only way for such weapons to never be used again at a time when Russia is threatening to use them in its war against Ukraine.

Nuclear threats "further underscore the enormity of the danger posed by the existence of nuclear weapons," according to the Vienna Declaration.

The statement expressed grave concern that nine countries -- Britain, China, France, India, Israel, North Korea, Pakistan, Russia and the United States -- possess a total of around 13,000 nuclear weapons and insisted that "nuclear-armed states never use or threaten to use nuclear weapons under any circumstances." 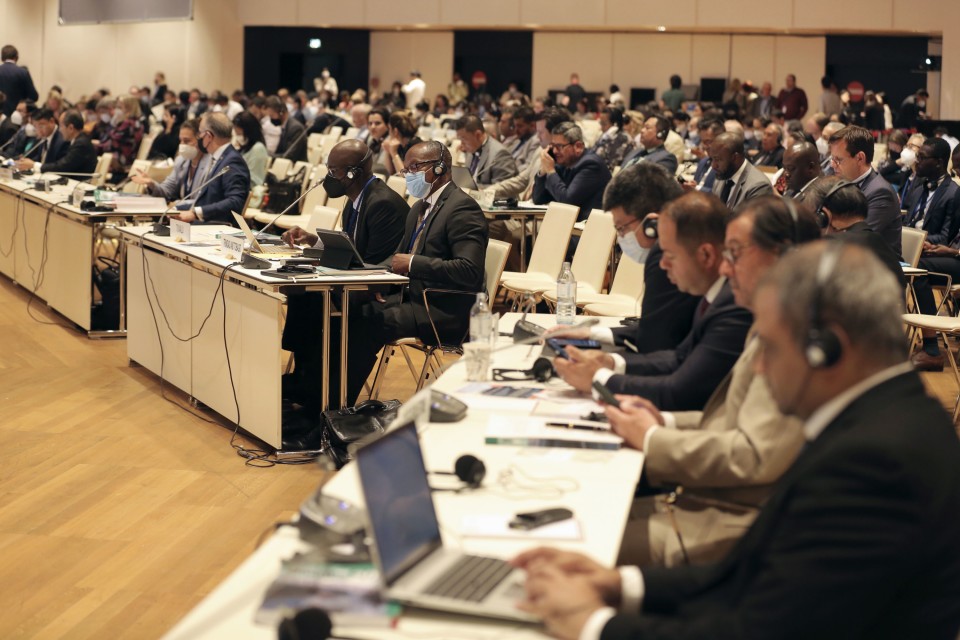 The first meeting of parties to a U.N. treaty banning nuclear weapons is held in Vienna on June 21, 2022. (Kyodo) ==Kyodo

Their concern comes as Russian President Vladimir Putin has ordered the country's nuclear forces on high alert in its aggression against Ukraine.

Also in the statement, the parties, including 65 countries and regions that have ratified the treaty, criticized countries under the nuclear umbrella of nuclear-weapons states, such as Japan, for not taking "any serious steps to reduce their reliance on nuclear weapons."

The parties will accelerate the implementation of the treaty "with the aim of further stigmatizing and de-legitimizing nuclear weapons and steadily building a robust global peremptory norm against them," the declaration said.

Japan, the only country in the world to have experienced the horrors of nuclear weapons in war, has not signed the nuclear weapons ban treaty and did not join the meeting, even as an observer, despite high expectations among survivors of the Hiroshima and Nagasaki bombings that it would.

Germany, Norway and the Netherlands participated in the meeting with observer status although their national defense depends on the U.S.-led nuclear umbrella as members of the North Atlantic Treaty Organization.

Sweden and Finland, which have applied to join NATO in the wake of Russia's invasion of Ukraine, as well as Australia, a key U.S. ally just like Japan, were also among observer participants.

The participants hailed "valuable contribution to taking forward nuclear disarmament" by entities and people, including "hibakusha" or survivors and others who have been physically affected by nuclear radiation.

The nuclear-armed states, which are allowed to possess the weapons under the Treaty on the Non-Proliferation of Nuclear Weapons or NPT, are against the nuclear weapons ban treaty.

The ban treaty is the first international pact outlawing nuclear weapons development, testing, possession and use. The first meeting was held to build momentum for abolishing the ultimate weapons of war.

Friction remains between non-nuclear countries that support the nuclear ban treaty and nuclear-weapon states. The ban treaty will work constructively with the NPT, as it recognizes the NPT as the "cornerstone of the disarmament and nonproliferation regime," according to the declaration.