Thailand has begun a campaign to attract international tourists, and especially Japanese travelers, using the popularity of homegrown productions of "boys' love," or BL dramas, as a drawcard.

At the "Mini Thai Festival" held in Osaka in early June, two booths were set up by video distributors in the "Thai BL" corner, dragging throngs of people away from street food stalls and an exhibition of the combat sport Muay Thai. The Tourism Authority of Thailand, or TAT, handed out pamphlets on Thai BL.

Known in Thailand as "Y series" -- a reference to the Japanese "yaoi" fiction that features homoerotic relationships between male characters and provided the inspiration for BL dramas -- the productions were once looked upon with prejudice but have gained acceptance due to their potential to function as a cultural export. 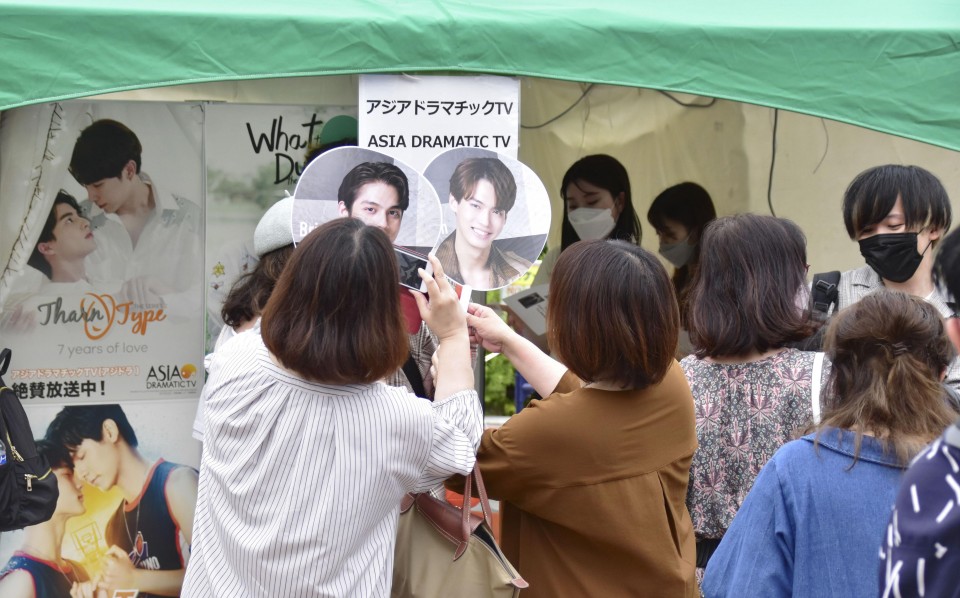 Fans gather in front of a booth promoting Thai "boys' love" dramas at the "Mini Thai Festival" in Osaka on June 5, 2022. (Kyodo)

"My heart flutters when I see these scenes of handsome actors falling in love with each other," Keiko Kobayashi, a 58-year-old who works in Osaka and met with friends to drink Thai beer at the festival, said.

She became a fan of the genre about a year ago. Because of Thai BL dramas, "I started learning about Thailand, which I previously had no interest in," she said.

The Thai BL boom took off in Japan about two years ago through word of mouth, with major works creating social media buzz. Maya Murai, 30, who works for TAT's Osaka branch, recognized the tourism potential and opened the office's Thai BL Twitter account, which now has more than 20,000 followers.

She saw the chance to promote tours to Thailand after discovering that 80 percent of Japanese fans of Thai BL had never been to the Southeast Asian nation. 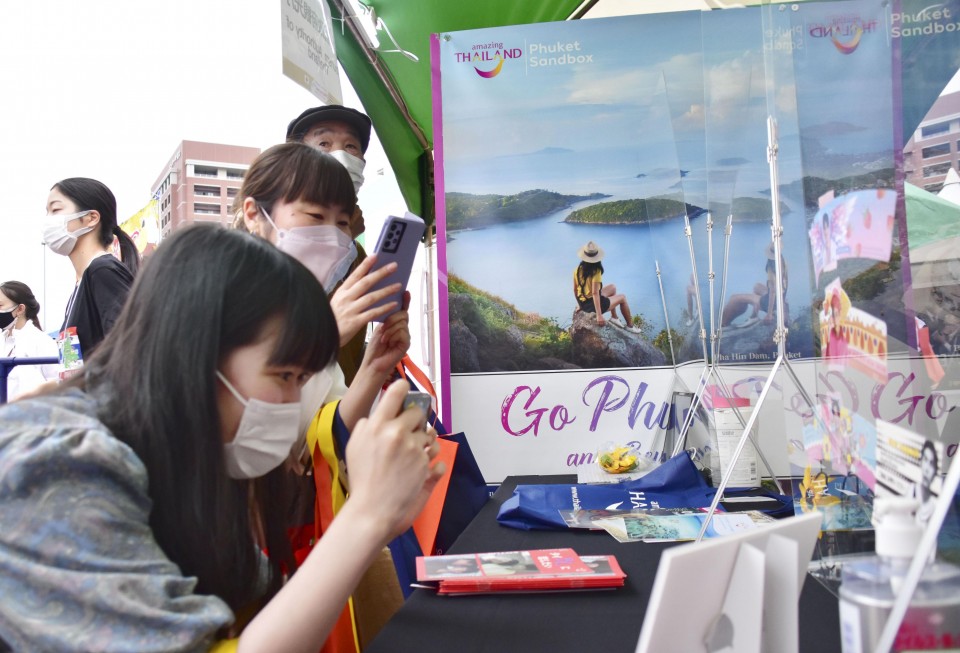 Fans take photographs of advertising boards for Thai "boys' love" dramas at a booth at the "Mini Thai Festival" in Osaka on June 5, 2022. (Kyodo)

Thailand lifted post-entry quarantine requirements and most other COVID-19 restrictions on travelers to the country from June onward.

When TAT's Osaka office solicited eight participants for a trial tour, partially paid for by the office, to BL drama location sites in Thailand for early June, the slots were immediately snapped up -- a limited but heartening indication of Japanese tourists' interest in a holiday structured around Thai BL.

Murai, who is also a fan of Thai BL, said, "I occasionally feel jealous of actresses when I watch love stories between men and women. But many women are attracted by BL dramas because they can simply support handsome men." 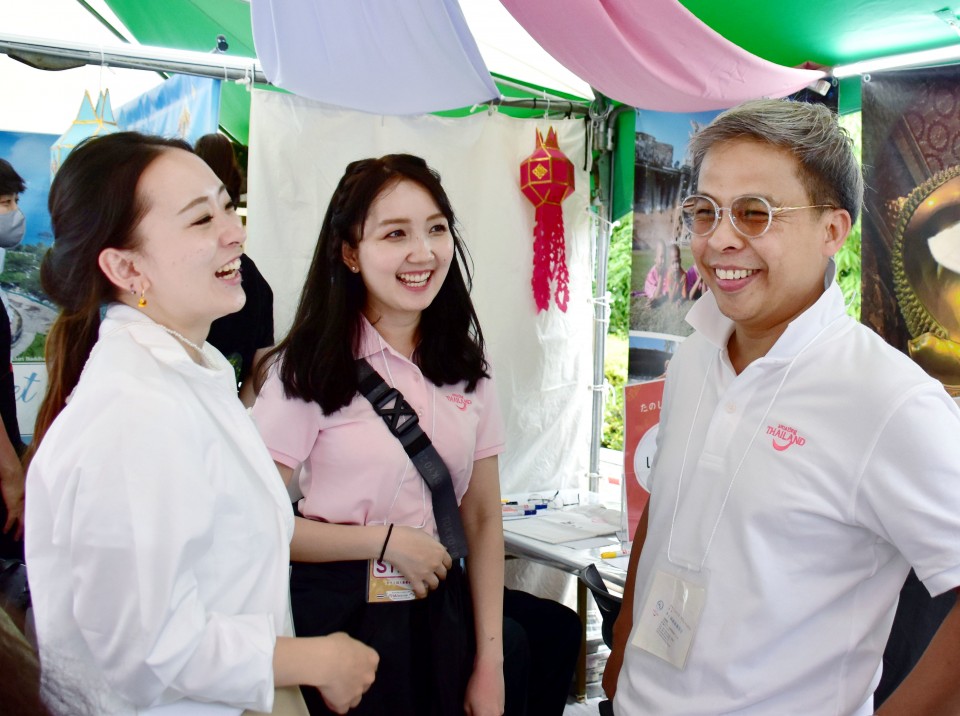 Chanyuth Sawetsuwan (R), head of Tourism Authority of Thailand's Osaka branch, along with Maya Murai (L), who works for the office, enjoy themselves at the "Mini Thai Festival" in Osaka on June 5, 2022. (Kyodo)

Indeed, the frank emotional subject matter and smiles seen in Thai BL dramas appear to have won the hearts of many Japanese fans.

"In the 1980s, BL works were in Japan rather than Thailand," said Rujirat Ishikawa, a 38-year-old Thai assistant professor at Aoyama Gakuin University specializing in Japanese manga culture. Fan clubs for Japanese BL works were formed in Thailand in the 1990s. 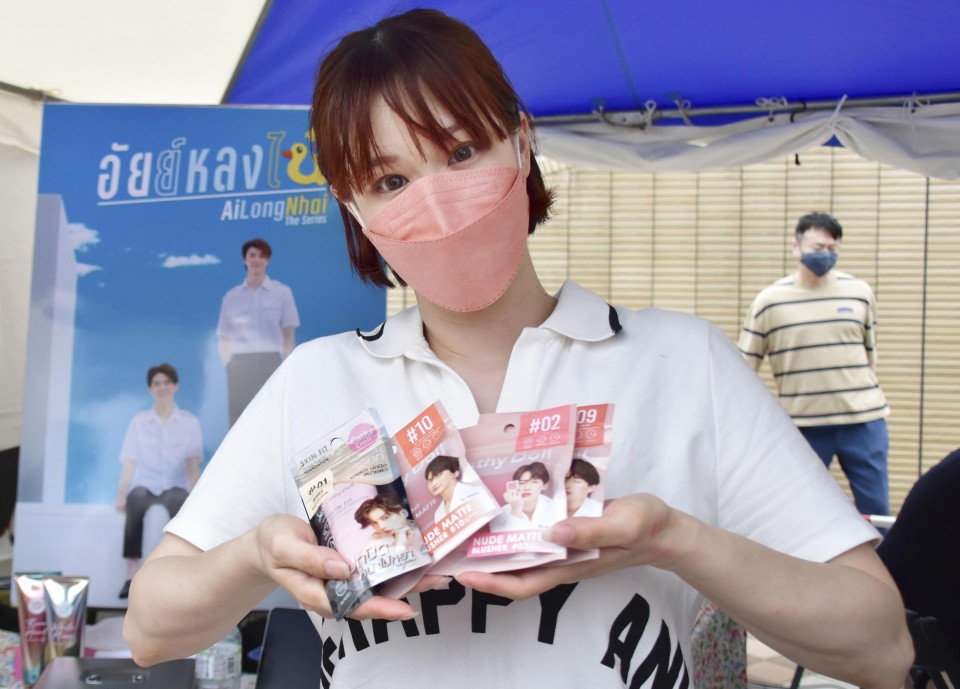 A scene of two men kissing in a 2007 Thai movie resulted in a torrent of criticism, Ishikawa said. Around the same time, however, some people began to be more accepting of homosexuality in Thai society. "Thai society changed, opening the way for a string of homegrown Thai BL drama productions," she said.

BL dramas feature scenes in which boys come out to family members or demonstrate similar acts of courage, giving viewers a sense of their internal struggles, Ishikawa said.