Japan's ruling party pledged Thursday ahead of a House of Councillors election to "fundamentally" reinforce the country's defense capability and increase relevant spending in the next five years, as Russia's war against Ukraine has raised calls for a more robust posture.

The Liberal Democratic Party has in mind a target of roughly doubling the country's defense spending to 2 percent or more of gross domestic product, in line with the North Atlantic Treaty Organization. 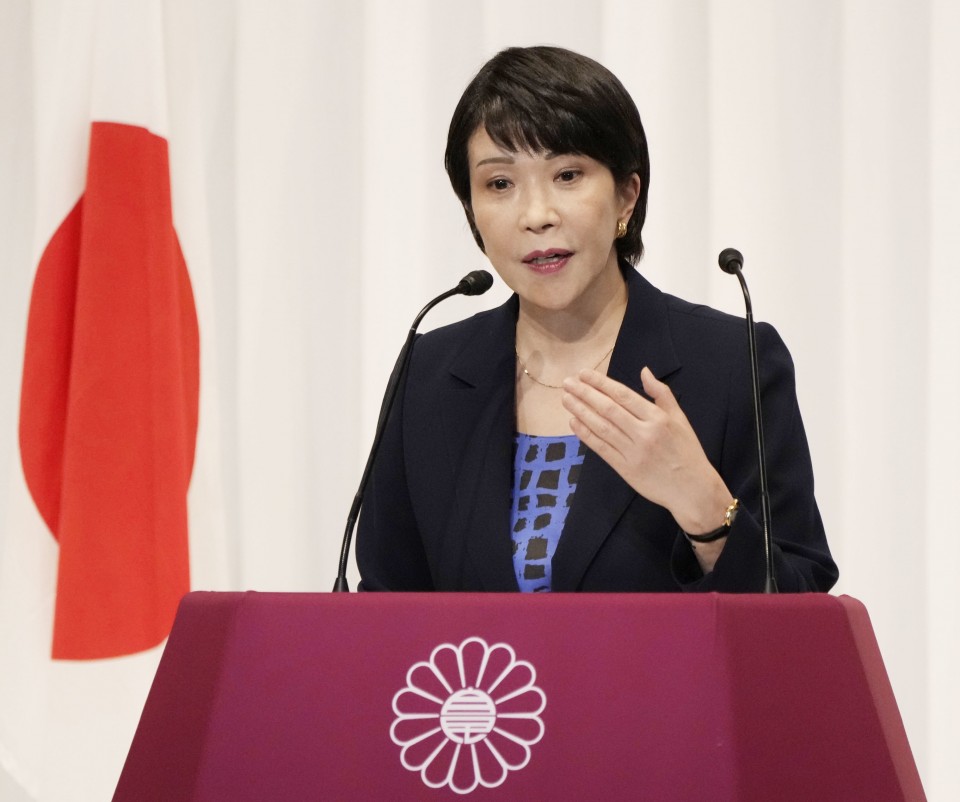 Sanae Takaichi, policy chief of the Liberal Democratic Party, holds a press conference in Tokyo on June 16, 2022, to announce the ruling party's campaign pledges ahead of the House of Councillors election in July. (Kyodo)

The goal is included in a package of pledges announced Thursday for the July 10 upper house election. Prime Minister Fumio Kishida, who heads the LDP, is seeking to gauge voter confidence in his roughly nine months of government handling amid the COVID-19 pandemic, the Russian invasion of its neighbor and accelerating inflation.

For years, Japan has been committed to an exclusively defense-oriented policy under the pacifist Constitution, and the country's defense spending has been limited to around 1 percent of GDP, or over 5 trillion yen ($37 billion) in the fiscal 2022 budget.

The LDP also aims to allow Japan to acquire the capability to "counterstrike" enemies, an issue that has gained attention in the face of repeated missile launches by North Korea but remains controversial. It maintained its long-held goal of revising the Constitution "at an early date."

"There is no economy or anything else unless we can defend our territory or sovereignty," Sanae Takaichi, the LDP's policy chief, told a press briefing.

The size of defense spending shows how strong a nation's will is to defend itself and sends a "strong message" to other countries, Takaichi said, at a time when Japan's security environment is becoming severe in the face of an assertive China, nuclear-armed North Korea and Russia.

Kishida said Wednesday the upcoming election will provide voters an opportunity to decide how Japan will tackle "history-making" challenges.

Higher prices of everyday goods, such as food and energy, which Kishida has attributed to the war, is a key issue for the LDP and other parties heading into the election as it directly affects the lives of voters.

The LDP seeks to take "powerful" steps to alleviate the pain from inflation and retain subsidies for oil wholesales to lower retail gasoline prices.

On the supply side, the party aims to make "maximum" use of nuclear power, along with renewable energy, in line with its push to restart nuclear power plants, taken offline following the 2011 Fukushima disaster, on condition that they pass strict safety standards.

The severity of the global security environment prompted the conservative LDP to place foreign policy and defense first on its priority list before measures to cope with accelerating inflation.

The LDP has a specific target for defense spending, but its coalition partner Komeito and the major opposition Constitutional Democratic Party of Japan did not include it in their campaign pledges, being of the view that substance, not size, should come first.

The LDP will continue to seek a revision to the Constitution for the first time since it was promulgated in 1946, saying that it will "update" the supreme law drafted under the U.S.-led Allied occupation of Japan after World War II.

Komeito has shown a slight tilt in its election platform toward the conservative LDP, which aims to mention the Self-Defense Forces in a revised Constitution to end the debate over its constitutionality.

Komeito vows to "consider" adding a reference to the Self-Defense Forces in the Constitution, a change from its previous stance that the party will "cautiously debate" the issue.

The LDP and Komeito will aim to maintain their majority of the upper house's 248 seats, of which about half are being contested in the race, Kishida said. Campaigning is set to begin next Wednesday.

For any revision to the Constitution to be initiated, approval by a two-thirds majority in both houses is required.