Japan's Yoshiyuki Ogata won the men's bouldering bronze at the sport climbing World Cup in Innsbruck on Thursday to earn the overall title for the second consecutive season.

Ogata made the final in all six World Cups and medaled five times on his way to becoming the 2022 World Cup Series winner. He was joined by Tomoa Narasaki and Kokoro Fujii in the top three of the World Cup ranking list, with Japan completing an overall bouldering podium sweep. 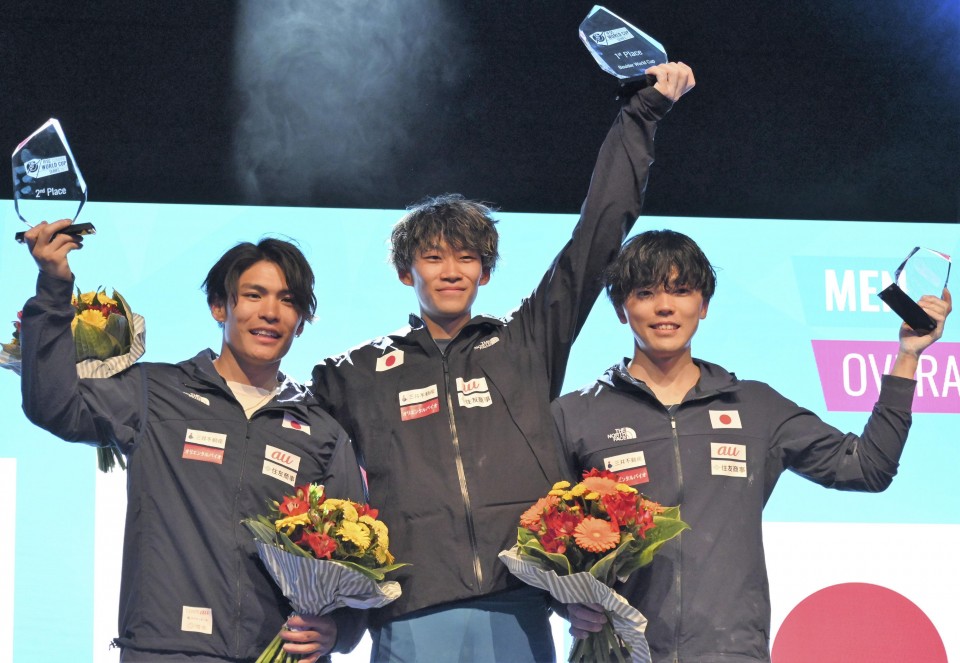 (From L) Tomoa Narasaki, Yoshiyuki Ogata and Kokoro Fujii of Japan pose on the podium after being crowned the top three of the World Cup ranking list in Innsbruck, Austria, on June 23, 2022. (Kyodo)

"I'm able to overcome difficult problems on the rock. My bouldering skills are improving so I want to work on my lead climbing skills next," he said.

American Colin Duffy topped the six-man final in the season finale in Innsbruck. The victory is the first World Cup win for the 18-year-old.

There are three disciplines in competitive sport climbing -- bouldering, lead and speed -- which were contested as a single event at the Tokyo Olympics. At the Paris Games in 2024, lead and bouldering will be combined, with a separate set of medals on the line in the speed event.