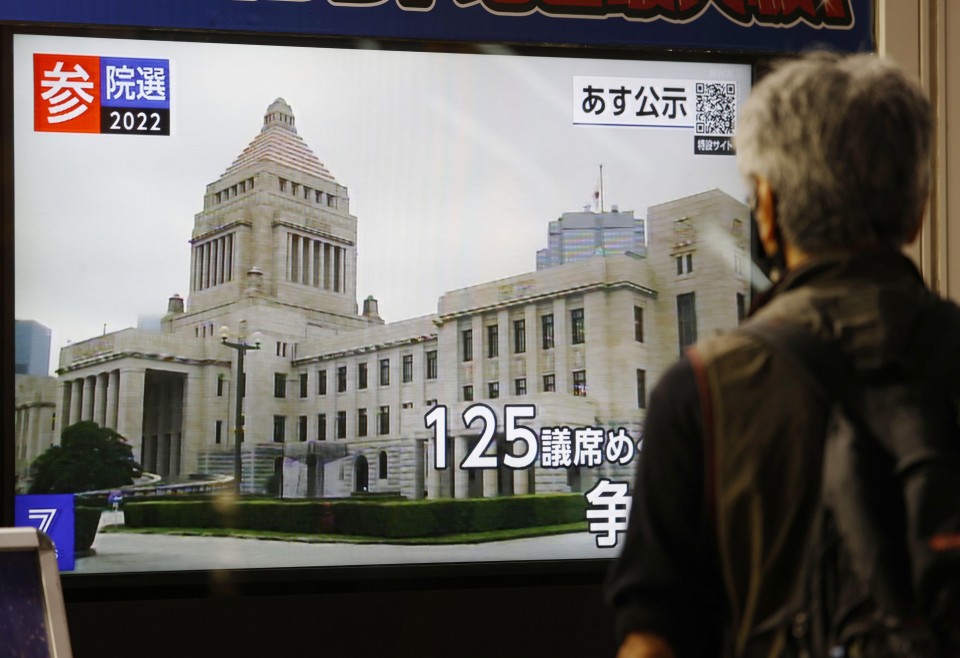 A roadside screen in Tokyo displays news on June 21, 2022, that official campaigning for Japan's House of Councillors election will start the following day. (Kyodo) ==Kyodo

TOKYO - Official campaigning began Wednesday in Japan for the House of Councillors election on July 10, as the ruling and opposition parties rush to address inflation concerns and spar over whether a more robust defense posture is necessary in the wake of Russia's war on Ukraine.

A total of 125 seats are up for grabs in the 248-member upper house, with a total of 545 people filing their candidacies. The number is a sharp rise from the 370 candidates in the last upper house election in 2019.

VIENNA - The first meeting of parties to a U.N. treaty banning nuclear weapons will conclude with an action plan pledging cooperation with nonsignatory countries affected by such weapons as it charts a course for their abolition, a draft obtained by Kyodo News showed Wednesday.

Japan, the only country in the world to have experienced the horrors of nuclear weapons in war, has not signed the Treaty on the Prohibition of Nuclear Weapons and did not join the meeting that started Tuesday in Vienna, even as an observer, despite high expectations among survivors of the Hiroshima and Nagasaki bombings that it would.

PHNOM PENH - Defense ministers from Japan and the Association of Southeast Asian Nations began a meeting Wednesday in Cambodia to discuss their cooperation in dealing with security challenges, as China extends its military influence in the region.

Defense Minister Nobuo Kishi and his ASEAN counterparts are expected to talk about boosting their cybersecurity capabilities, among other issues, at the first in-person meeting between Japanese and ASEAN defense chiefs since November 2019, according to Japanese officials.

SEOUL - The South Korean government said Wednesday it has agreed with Japan to resume flights next week between the two countries' capitals, suspended for more than two years due to the coronavirus pandemic.

The route between Seoul's Gimpo airport and Tokyo's Haneda airport will reopen on June 29, with four airlines -- Korean Air and Asiana Airlines of South Korea and Japan Airlines and All Nippon Airways -- operating a total of eight round trips a week, the transport ministry said, adding the number of flights will be increased from July, depending on demand.

TOKYO - A 47-year-old man suspected of fraudulently receiving around 1 billion yen ($7.4 million) in government COVID-19 subsidies was arrested Wednesday after he was sent back to Japan from Indonesia, an investigative source said.

Indonesian immigration authorities nabbed Mitsuhiro Taniguchi earlier this month on suspicion of overstaying his visa. He had left for Indonesia in October 2020, and Japanese police put him on a wanted list.

JAKARTA - Indonesia's President Joko Widodo will visit Russia and Ukraine to meet their leaders after attending a Group of Seven summit this month in Germany, the Foreign Ministry said Wednesday.

The move comes before Indonesia hosts a Group of 20 summit in November to which both Russian President Vladimir Putin and Ukrainian President Volodymyr Zelenskyy have been invited. The two leaders intend to attend the meeting although Western members are trying to block Putin's participation.

While third vaccine shots are widely administered to adults in Japan, children in that age group are currently only allowed to receive up to two shots.