Monetary tightening is not a "suitable" measure at all for the Bank of Japan as the domestic economy is still in the midst of a recovery from the COVID-19 pandemic while higher commodity prices are adding downward pressure, Governor Haruhiko Kuroda said Monday.

Even though core consumer inflation jumped 2.1 percent in April from a year earlier, it does not mean the BOJ's 2 percent inflation target has been achieved, Kuroda said, stressing that the central bank will not waver in its aggressive monetary easing to support the economy and ensure more robust wage growth.

His remarks, made at an event organized by Kyodo News, reinforced the view that the BOJ will remain an outlier among major central banks that are transitioning to tighter monetary policy to rein in soaring inflation. 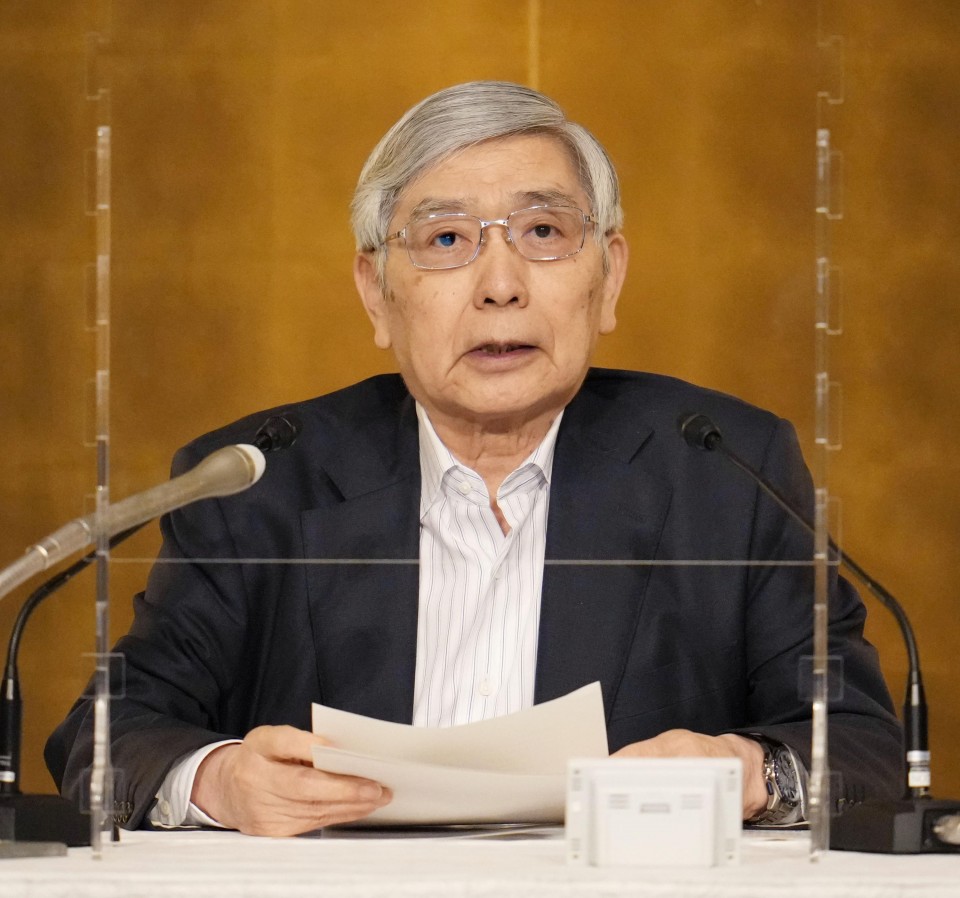 The yen has been falling as financial markets price in the prospect of such policy divergence, but Kuroda said yen weakness is "positive" as long as it is not rapid. It will also benefit pandemic-hit service providers in regional areas as Japan is set to reopen its doors to foreign tourists from Friday, he added.

"Unlike other central banks, the bank has not faced the trade-off between economic stability and price stability," Kuroda said in his speech. "For this reason, it is certainly possible for the bank to continue stimulating aggregate demand from the financial side."

Under its yield curve control program, the BOJ sets short-term interest rates at minus 0.1 percent while guiding 10-year Japanese government bond yields to around zero percent.

To defend its cap on the benchmark yield, the central bank announced it would buy unlimited amounts of 10-year government bonds at a fixed rate of 0.25 percent every business day.

"Japan's economy is still on its way to recovery from the pandemic and has been under downward pressure from the income side due to rising commodity prices. In this situation, monetary tightening is not at all a suitable measure," the BOJ chief added.

The recent bout of inflation is a mixed result for the BOJ because most of it can be attributed to surging energy and raw material prices due to Russia's war in Ukraine, not strong domestic demand.

Kuroda said a growing number of Japanese households have begun to feel price rises, as fuel costs and goods they frequently buy, such as food, are becoming more expensive.

The BOJ projects that the rise in the core consumer price index, excluding volatile fresh food items, will only be temporary because commodity inflation will not last and the index is expected to slow to 1.1 percent in the year from next April.

In his speech, Kuroda said the BOJ's failure to attain its 2 percent inflation target after over nine years of monetary easing can be traced to the "zero inflation norm," in which everyone acts in concert to keep prices unchanged.

As inflation expectations have been rising recently and consumers have become more tolerant of price hikes, the BOJ will use its monetary easing to achieve "sustained" inflation, or an inflation rate of 2 percent on average, Kuroda said.

For resource-poor Japan, the recent sharp depreciation of the yen has become a headache because it inflates import costs.

The recent depreciation of the yen is partly because of the BOJ's dovish stance, which stands in contrast to the United States, where the Federal Reserve has begun raising interest rates. The European Central Bank is also expected to go ahead with a rate hike as early as July.

"It is highly likely that stable moves toward yen weakness, not rapid moves, are positive for the Japanese economy as a whole," Kuroda said in a question and answer session, noting that the currency's decline brings varying impacts across sectors and companies.

"What is important for the economy is that companies that have reaped the benefits of yen weakness and seen their profits recover will increase capital spending and raise wages, and there will be a stronger cycle in the economy for more income and spending," he added.