Japan were beaten 1-0 by Brazil in an international friendly Monday after Neymar converted a 77th-minute penalty for the South Americans, who dominated the shot count but had trouble breaking down the home side's stubborn defense.

The Samurai Blue hung on until Wataru Endo was penalized for bringing down substitute Richarlison at a rainy National Stadium in Tokyo, with Paris Saint-Germain star Neymar sending keeper Shuichi Gonda the wrong way. 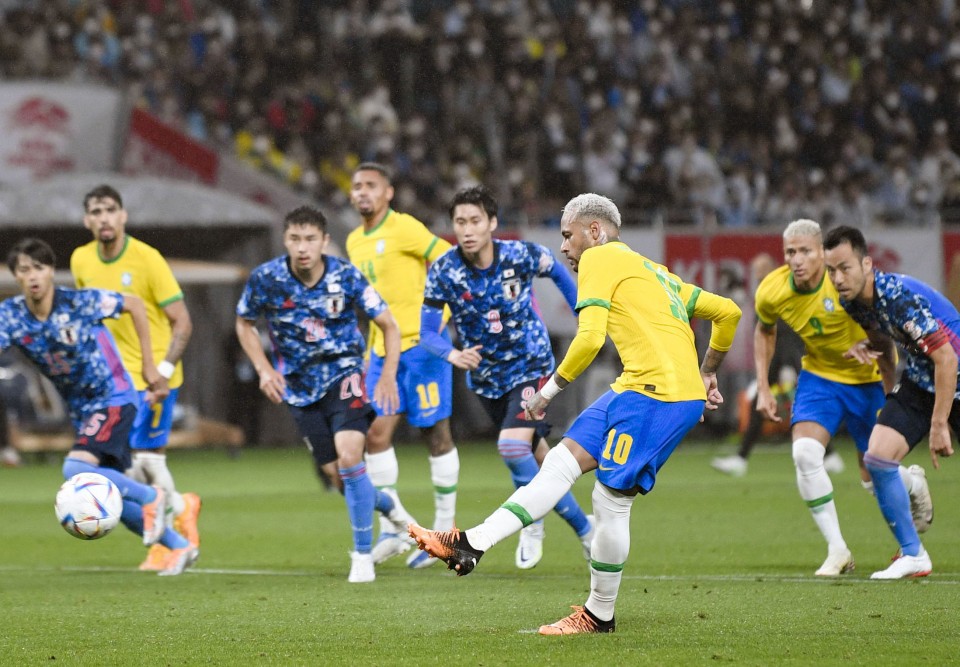 Neymar (10) of Brazil scores a goal from a penalty kick in the second half of an international friendly against Japan held at the National Stadium in Tokyo on June 6, 2022, as a warm-up for the World Cup finals that begin in November in Qatar. (Kyodo) ==Kyodo

The World Cup warm-up was Japan's first international at the reconstructed stadium, which was filled by a crowd of 63,638.

Japan, 23rd in the FIFA rankings, were denied a late penalty appeal for substitute Kaoru Mitoma and remain without a win over world No. 1 Brazil, having now drawn two and lost 11 of their meetings at the senior level.

Manager Hajime Moriyasu, whose side beat Paraguay 4-1 on Thursday, praised Japan for largely holding their own against a Brazilian outfit coming off a 5-1 demolition of South Korea, but said further improvement was needed before the World Cup kicking off in November in Qatar.

"We fought patiently when it was required," Moriyasu said. "Even under attack, the team was up for the challenge."

"At times we showed we're capable of competing on the world stage. However, in order to win, we still need to improve our quality."

Brazil threatened within minutes of kickoff when Neymar's back-heel found Lucas Paqueta inside the box, but the hosts were let off the hook by the midfielder's low effort hitting the left post.

Gonda was called into action 10 minutes later at the other end, using his legs to deny Raphinha's low strike after he was played through by Daniel Alves.

Endo headed just wide from a corner, while Casemiro also came close from a free kick before Neymar's curling effort from the edge of the box forced Gonda into a diving save, which was followed by a spell of relentless pressure from the Brazilians. 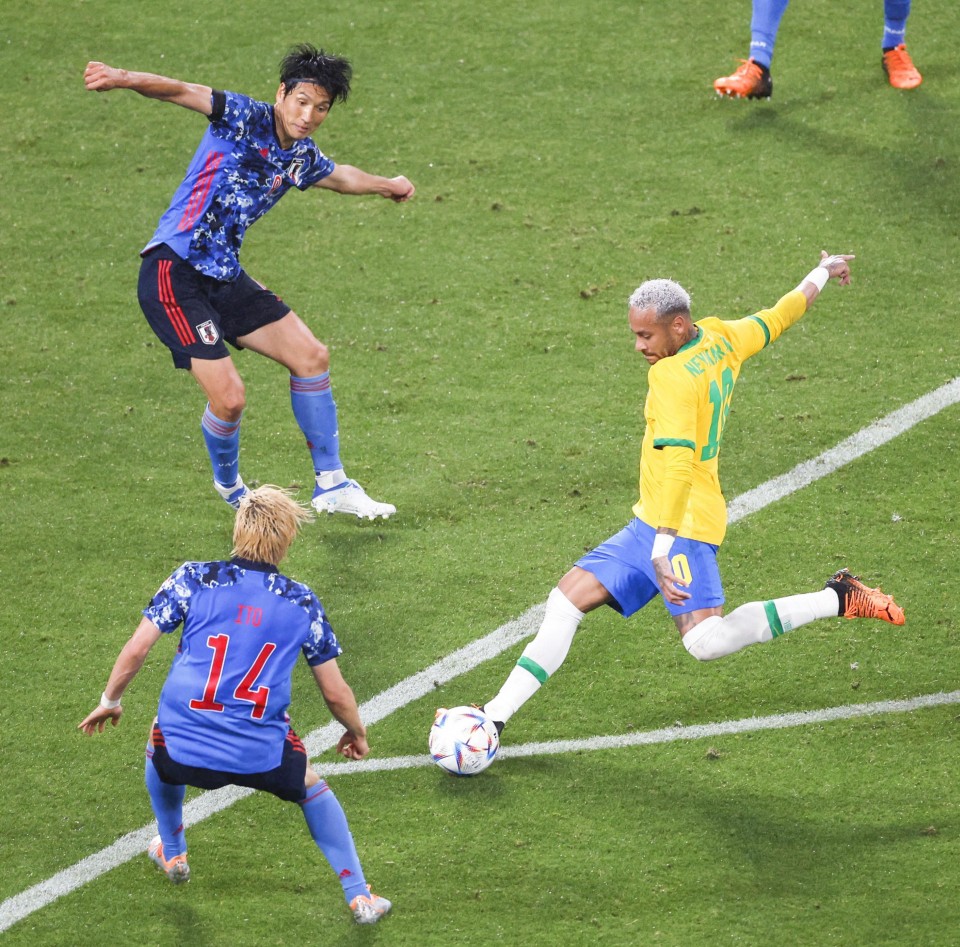 Neymar (R) of Brazil shoots in the first half of an international friendly against Japan held at the National Stadium in Tokyo on June 6, 2022, as a warm-up for the World Cup finals that begin in November in Qatar. (Kyodo) ==Kyodo

Japan's defense crowded out Vinicius Junior following tidy footwork from the attacker, but the visitors' trickery, coupled with mistakes from the Japanese midfield, resulted in a string of Brazil free kicks from dangerous positions.

The Samurai Blue did well not to concede heading into halftime, but Brazil continued to dominate after the break, with Neymar's close-range effort blocked for a corner and Raphinha blasting wide.

Daichi Kamada, who started the half in place of Genki Haraguchi, provided much-needed time in the midfield for Japan as they passed the 60-minute mark without conceding.

Brazil started to hit long balls, with Neymar gathering a pass from keeper Alisson on his chest, only to see his volley blocked by Itakura in the 64th minute, while Gabriel Martinelli, Gabriel Jesus and Richarlison also came in search of the opener. 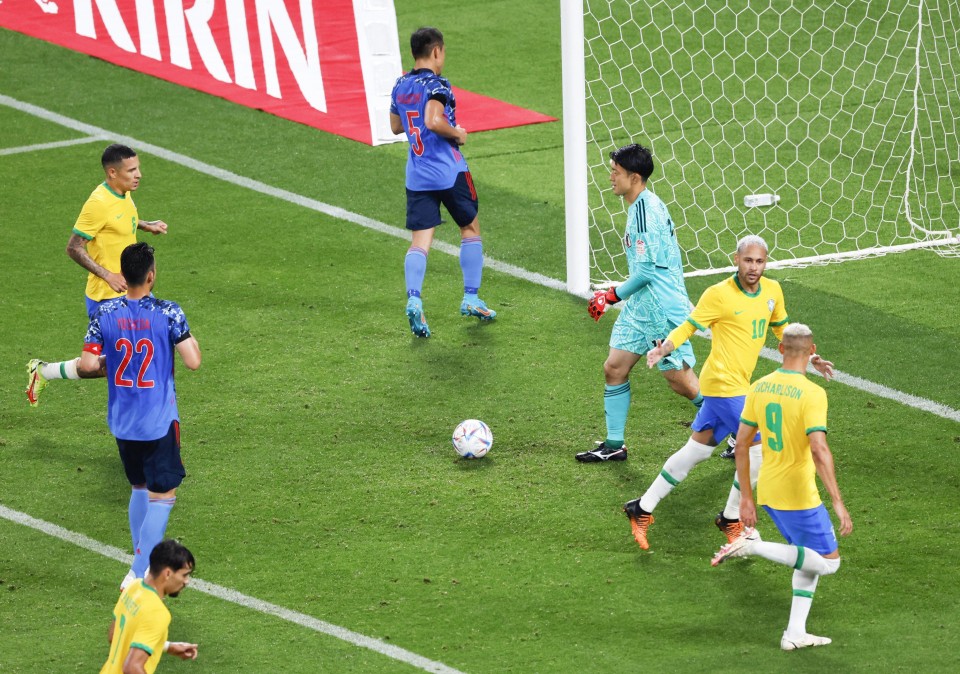 Neymar (2nd from R) of Brazil reacts after scoring a goal from a penalty kick past Japan goalkeeper Shuichi Gonda (3rd from R) in the second half of an international friendly held at the National Stadium in Tokyo on June 6, 2022, as a warm-up for the World Cup finals that begin in November in Qatar. (Kyodo) ==Kyodo

Japan finally carved out an opening in the 71st minute when Minamino won a loose ball in the opposing half and fed left-back Yuta Nakayama for a cross to the far post, but Junya Ito could only volley over.

The deadlock was broken six minutes later, with Neymar making no mistake from the spot following a contentious penalty decision without a review.

But Mitoma could have had a penalty himself four minutes from time as he made his way into the box down the left after combining with Kamada. He was toppled, but Iranian referee Alireza Faghani waved play on with no review again, leaving Moriyasu enraged.

Japan will continue warming up for the 2022 World Cup in Qatar with a friendly against Ghana in Kobe on Friday. 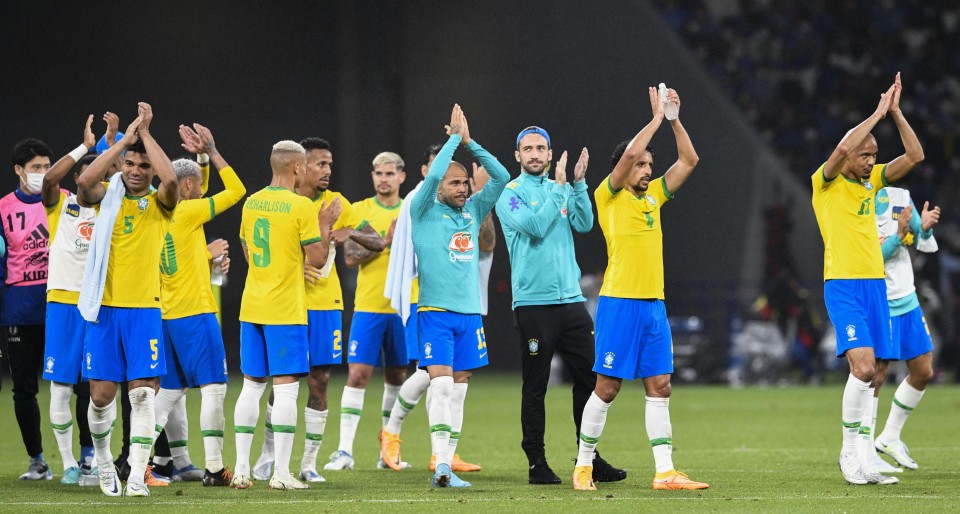 Members of Brazil's national football team clap their hands after beating Japan 1-0 in an international friendly held at the National Stadium in Tokyo on June 6, 2022, as a warm-up for the World Cup finals that begin in November in Qatar. (Kyodo) ==Kyodo 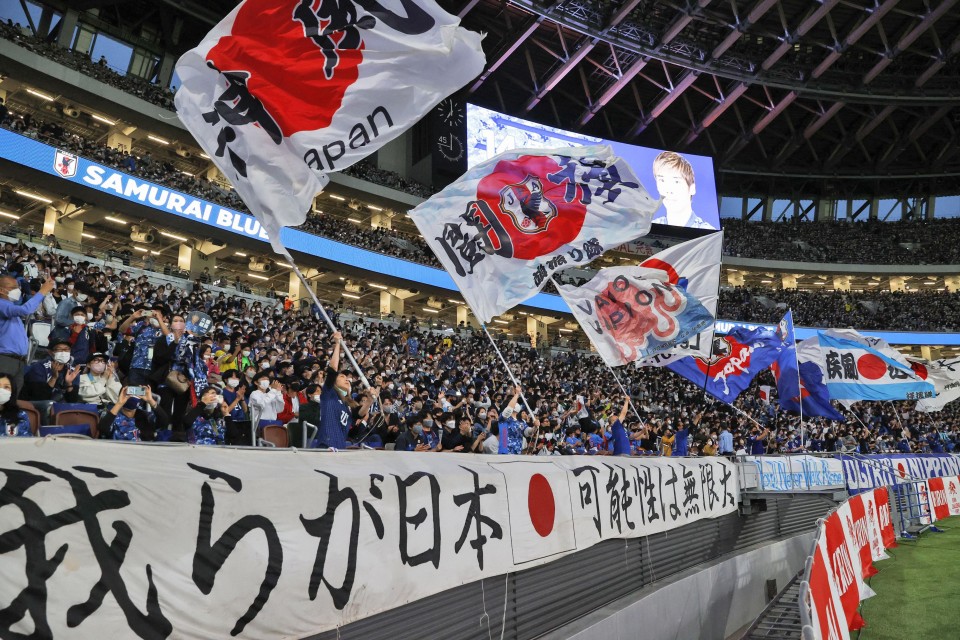 Japan supporters cheer in the stands before an international friendly against Brazil being held at the National Stadium in Tokyo on June 6, 2022, as a warm-up for the World Cup finals that begin in November in Qatar. (Kyodo) ==Kyodo