Japanese municipalities that hosted overseas athletes for training camps before last summer's Tokyo Olympics and Paralympics will be eligible for new subsidies aimed at promoting people-to-people exchanges with their respective partner countries, sources familiar with the matter said Monday.

The Japan Sport Council will set up a subsidy program to cover part of the expenses, such as those for inviting athletes from abroad, the sources said, adding the program is due to begin in fiscal 2023 starting next April.

The Tokyo-headquartered council, which works closely with the education ministry to advance sports activities, is expected to formally announce the launch of the initiative in the near future, they said. 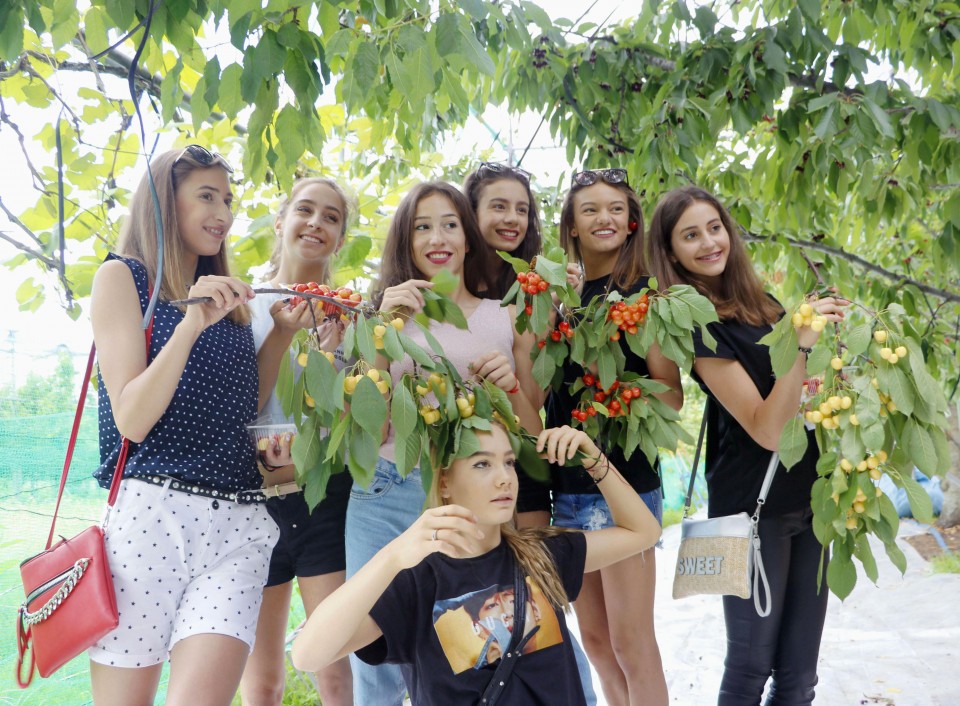 File photo shows Bulgarian gymnasts posing for a photo with cherries in hand at a fruit farm in Murayama, Yamagata, in June 2018. (Kyodo)

The launch is part of efforts to pass down the legacy of the Tokyo Games, which were largely held without spectators due to the coronavirus pandemic. The sources said the program will be financed by sales from soccer lotteries.

Before the Olympics and Paralympics, 533 cities, towns and villages across Japan registered for an initiative led by the government to promote exchanges between them and participating foreign athletes as well as their home countries. It was also intended to revitalize local economies and foster international goodwill.

Of those municipalities, 250 were able to welcome about 8,000 athletes and team officials by taking measures against COVID-19, according to the Cabinet Secretariat. Even after the games, 35 municipalities hosted 220 people from overseas delegations, it said.

But many so-called host towns could not welcome athletes from their partner countries because of the pandemic, with some only managing to communicate with them online.

The subsidy program, designed to carry forward the governmental initiative, will be created as a number of municipalities wish to continue to interact with their partner countries or find opportunities to do so.

Municipalities across Japan welcomed the program. "It's difficult to continue (exchanges) with just a city budget and support from companies," said Keita Togashi, an official of Murayama city, which hosted Bulgaria's rhythmic gymnastics team.

He said the city in northeastern prefecture of Yamagata is looking forward to using the financial assistance as a local fan club was formed for the team and the Bulgarian athletes have treated the city like an adopted home.

An official from Sapporo, which hosted Ukraine's men's Paralympic goalball team, said, "We would like them to come here again once the situation is settled."

As Japan has started easing its border controls following a fall in the number of new COVID-19 cases, the council plans to disseminate information about the subsidy program as soon as possible so that municipalities can prepare for their activities in advance, according to the sources.

The council is also hoping that the program will help develop public support for Sapporo's bid to host the 2030 Winter Games.