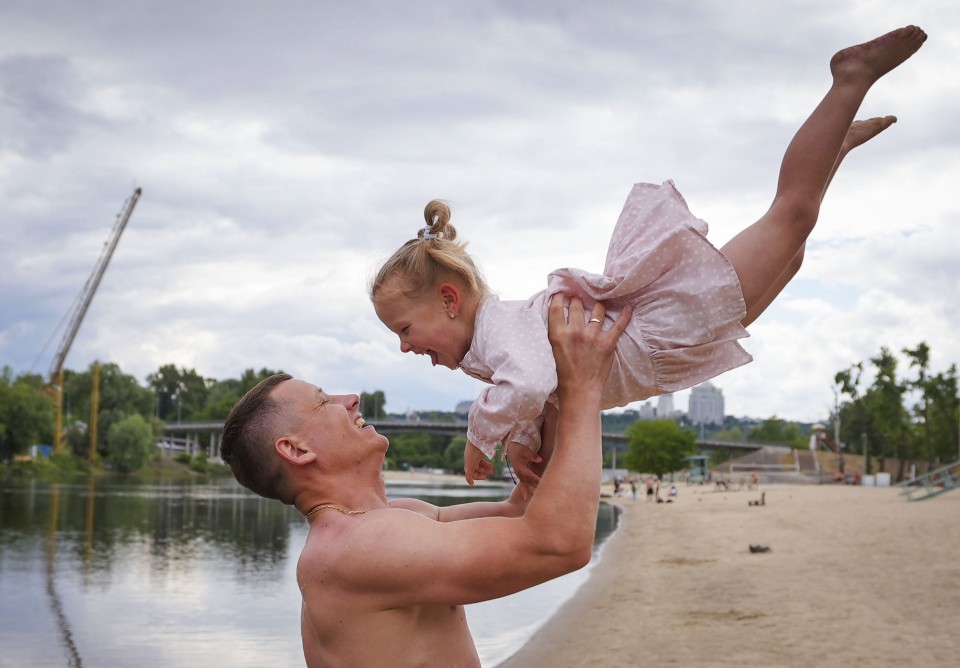 A man plays with his daughter by the Dnieper River in the Ukrainian capital Kyiv on June 18, 2022, amid Russia's invasion of the country. (Kyodo) ==Kyodo

MUNICH - Leaders from the Group of Seven industrialized nations on Tuesday committed $4.5 billion to address global food security amid Russia's war on Ukraine, while eyeing a "coordinated approach" to what they view as China's harmful economic practices, according to a senior U.S. government official.

Later in the day, the G-7 will wrap up three days of talks in Schloss Elmau, southern Germany, where discussions have been largely dominated by rising inflation and shortages in energy and food, issues that have put the global economy in a perilous situation.

TOKYO - The ruling Liberal Democratic Party remains in the lead with the highest support rate ahead of the July 10 House of Councillors election, a Kyodo News survey showed Tuesday.

In the nationwide telephone survey conducted from Sunday through Tuesday, 28.3 percent of respondents said they will vote for the LDP led by Prime Minister Fumio Kishida when casting ballots under proportional representation, up 1 point from the previous poll conducted June 18 to 19.

TOKYO - The government on Tuesday again asked households and businesses in Tokyo and nearby areas to reduce electricity consumption in response to a spike in demand driven by high temperatures and infrastructure issues.

For the second consecutive day, an advisory has urged people in Tokyo Electric Power Company Holdings Inc.'s service area to take reasonable energy-saving steps including turning off unnecessary lights from 3 p.m. to 6 p.m. while making appropriate use of air conditioners.

"I'm delighted that tomorrow, finally, we are able to have Fukushima-origin products all over the shops in the U.K.," Johnson said at the outset of the meeting.

TOKYO - The government decided Tuesday to lift an evacuation order on part of a town hosting a crippled nuclear power plant in Fukushima Prefecture, allowing residents to return home for good this week for the first time since the March 2011 earthquake, tsunami and nuclear disaster.

Restrictions in a zone specified as a reconstruction and revitalization base in Okuma will be lifted at 9 a.m. Thursday, the first such case for a municipality hosting Tokyo Electric Power Company Holdings Inc.'s Fukushima Daiichi plant in northeastern Japan.

Hayashi is also scheduled to hold meetings with Marcos and incoming Vice President Sara Duterte-Carpio, the daughter of outgoing President Rodrigo Duterte, during his planned three-day trip to the Southeast Asian nation through Friday, he told reporters.

TOKYO - Russia has defaulted on its foreign debt, Moody's Investors Service Inc. said Monday, as international sanctions have shut the country out of global financial transactions over its invasion of Ukraine.

While Russia has denied having defaulted, the determination by the major U.S. credit rating agency that the country had missed coupon payment to holders of its bonds worth $100 million during a grace period is expected to have a long-term impact on its ability to raise funds in foreign currencies.

TOKYO - Toshiba Corp. shareholders on Tuesday approved a proposal for appointing 13 board members, including two new members from overseas investment funds that are considered activist investors.

Under the new management, the Japanese conglomerate with a nearly 150-year history is expected to hasten steps to revamp itself, including going private amid frustration among investors by its lackluster efforts to raise corporate value.