A Stradivarius violin put up for sale by a Japanese businessman has sold for over $15 million in New York, Tarisio Auctions said Thursday.

The violin, made by Antonio Stradivari in 1714 during the Italian craftsman's "golden period," was put up by Tokuji Munetsugu, founder of the operator of the Japanese curry restaurant chain CoCo Ichibanya, who had owned it since 2007.

The identity of the successful bidder was not immediately known. 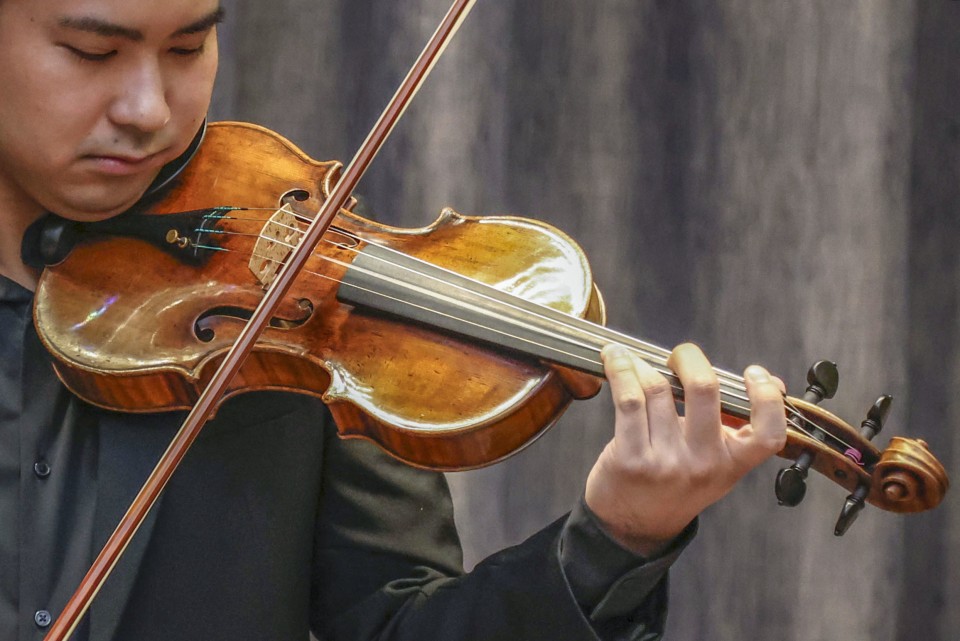 A violin made by Italian stringed instrument craftsman Antonio Stradivari in 1714 and called "da Vinci, ex-Seidel," is tried out at an event in Tokyo on May 10, 2022. (Kyodo)

Called "da Vinci, ex-Seidel," and fetching $15,340,000, the instrument was once owned by Toscha Seidel, one of the greatest violinists of the 20th century, and was played by him on the soundtrack of the 1939 Oscar-winning movie "The Wizard of Oz."

Tarisio Auction said the instrument was "fetching, beguiling and in excellent condition" and belonged to an "elite group" of golden period instruments.

Munetsugu, described by the auction house as a "passionate enthusiast of classical music," supports talented international young artists with the loans of important instruments through the Munetsugu Angel Violin Competition.

According to a person familiar with the matter, Munetsugu wanted the more than 300-year-old violin to be used outside Japan, where it was being leased, according to the person.

The highest auction price for a violin is another Stradivarius that sold in 2011 for around $16 million at a London auction, according to Tarisio.

The instrument was listed by Nippon Music Foundation to raise funds for victims of massive quake and tsunami disasters which devastated Japan's northeastern region that year.

Stradivarius instruments worth over $180 mil. on display in Tokyo