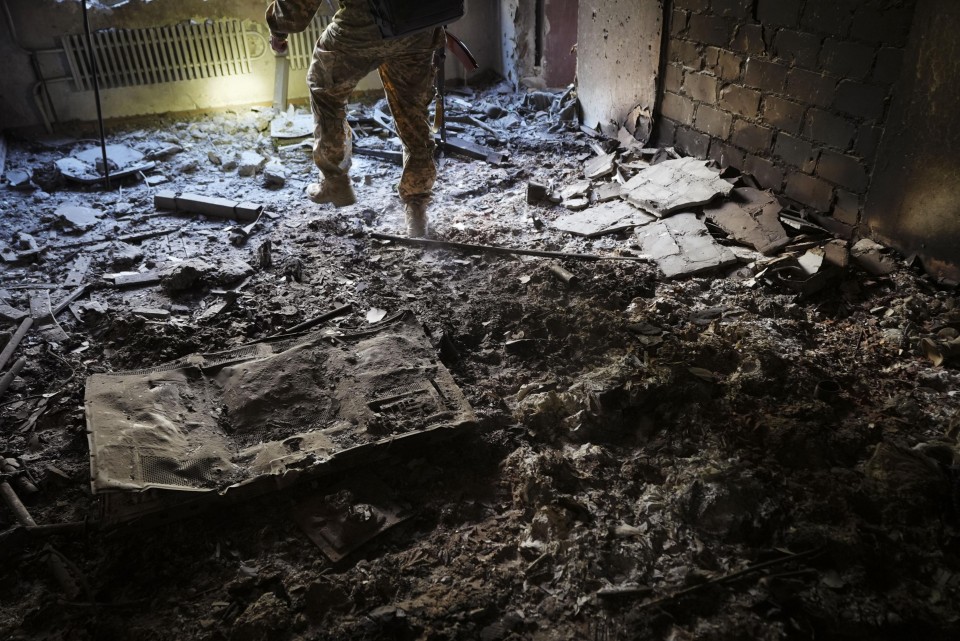 A room in a residential complex damaged by Russian bombardment is pictured in the Saltivka district of Kharkiv, eastern Ukraine, on June 11, 2022. (Kyodo) ==Kyodo

TOKYO - Japan's defense minister on Tuesday expressed hope that military intelligence would be smoothly shared again with South Korea after its foreign minister said an accord once on the brink of termination under a previous administration should be normalized.

"I hope there will be exchanges between the two sides toward smoother operation" of the General Security of Military Information Agreement, Defense Minister Nobuo Kishi said.

1 in 4 singles in 30s not willing to marry: Japan gov't survey

TOKYO - One in four singles in their 30s who have never been married in Japan said they have no desire to tie the knot, citing such reasons as concerns over a loss of freedom and associated housework and financial burdens, a government survey showed Tuesday.

The findings of the survey on marriage and income were cited in the government's white paper on gender equality, which also noted that the number of marriages in 2021 dropped to around 514,000, the lowest in the postwar period, on the basis of preliminary data.

TOKYO - Tokyo stocks extended Tuesday their losing streak to three days, briefly sending the Nikkei index down more than 2 percent, amid heightened concerns over the U.S. economy on expectations the Federal Reserve will more aggressively hike rates to curb inflation.

TOKYO - Japanese director Hirokazu Koreeda and six other filmmakers said Tuesday they have established a group to push for the creation of an organization to improve the working environment in the domestic film industry amid increasing cases of harassment allegations.

The group is seeking to establish a specialized organization similar to France's National Centre for Cinema and the Moving Image, which provides various types of support to the industry by collecting a portion of revenue from box-office sales and distribution rights, Koreeda and others said at a press conference at the Foreign Correspondents' Club of Japan in Tokyo.

Idemitsu to shut refinery in western Japan amid decarbonization trend

TOKYO - Japanese oil wholesaler Idemitsu Kosan Co. said Tuesday it will close a refinery in Yamaguchi Prefecture, western Japan, by March 2024 as it expects to see a continuous fall in demand for gasoline due to an increase in greener vehicles amid the global trend toward decarbonization.

Idemitsu said in a statement that demand is expected to further shrink also due to Japan's declining population and the impact of the COVID-19 pandemic, leading to the decision to shut down the facility, which has a crude oil refining capacity of 120,000 barrels per day, accounting for about 10 percent of its group's total.

TOKYO - Sixteen Japanese universities have teamed up to accept students fleeing war-torn Ukraine to help them rekindle hopes to build a future that seemed impossible following the Russian invasion.

The colleges, including International Christian University, Meiji University and Sophia University, plan to offer approximately 70 students in total free education and a safe environment to study.

TOKYO - A group of 10 people working as freelance delivery drivers for Amazon.com Inc.'s Japan unit have unionized and handed over a letter to the online shopping giant's Tokyo headquarters demanding that their poor working conditions be corrected, union members said Monday.

The union claimed that, despite working as freelance drivers, Amazon Japan G.K. effectively controls their work hours by sending delivery instructions via smartphones and that outsourcing of delivery operations is a way to avoid signing labor contracts.

TOKYO - Newly enshrined Hall of Fame boxer Floyd Mayweather is headed back to Japan for his next post-retirement exhibition bout in September, when he will face Japanese mixed martial artist Mikuru Asakura, organizers announced Monday in Las Vegas.

The boxing match will take place under the banner of Japan's Rizin mixed martial arts organization, in which the 29-year-old Asakura competes.