Members of the French national rugby team visited judo's international headquarters in Tokyo on Thursday and learned aspects of the martial art ahead of their test match against Japan.

The cultural exchange between the French Rugby Federation and the All Japan Judo Federation was initiated by the touring team, who joined a traditional practice session at the Kodokan Judo Institute.

Mindful of injury before Saturday's first test, the visitors refrained from heavy contact drills but practiced bowing and falling. 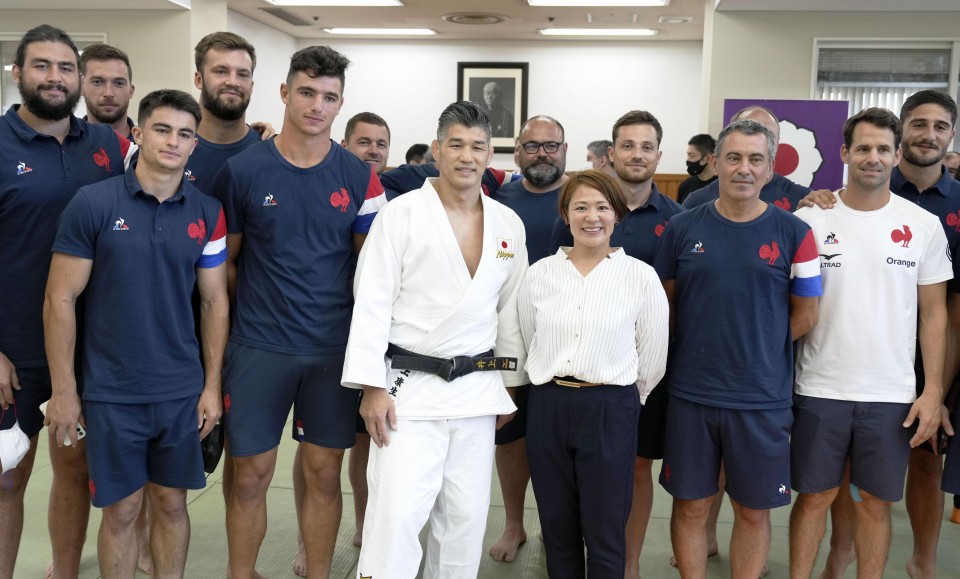 Members of the French national rugby team are pictured with Kosei Inoue (center, L), former head coach of the Japanese men's judo team, at the Kodokan Judo Institute in Tokyo on June 30, 2022. (Kyodo)

Sydney Olympic 100-kilogram gold medalist and former men's national team coach Kosei Inoue was among the judoka taking part in the session. He received a round of applause from the visiting rugby players after demonstrating his powerful uchi-mata inner thigh throw.

"I'm honored that some of the world's top athletes chose to come see judo," Inoue said. "It would be interesting if judo moves could be employed in other sports."

Six Nations champions and 2023 Rugby World Cup hosts France will play the Brave Blossoms in the first of two tests Saturday at Toyota Stadium in Aichi Prefecture. The teams will meet again a week later at Tokyo's National Stadium.