BOJ policy should be set "comprehensively," not just for yen: Kishida

The comment signals the premier's support for the Bank of Japan's decision Friday to maintain its ultraeasy monetary policy, even as the approach could weaken the yen further and raise the costs of imported products.

In an online debate of party leaders held ahead of the July 10 upper house election, the main opposition Constitutional Democratic Party of Japan leader Kenta Izumi said the central bank should change the policy to keep the Japanese currency from falling further after it tumbled to 24-year lows recently against the U.S. dollar.

"While a monetary policy affects foreign exchange, it also has a major impact on the burden of interest payments by small- and medium-sized enterprises," said Kishida, who heads the ruling Liberal Democratic Party, adding, "It must be decided comprehensively." 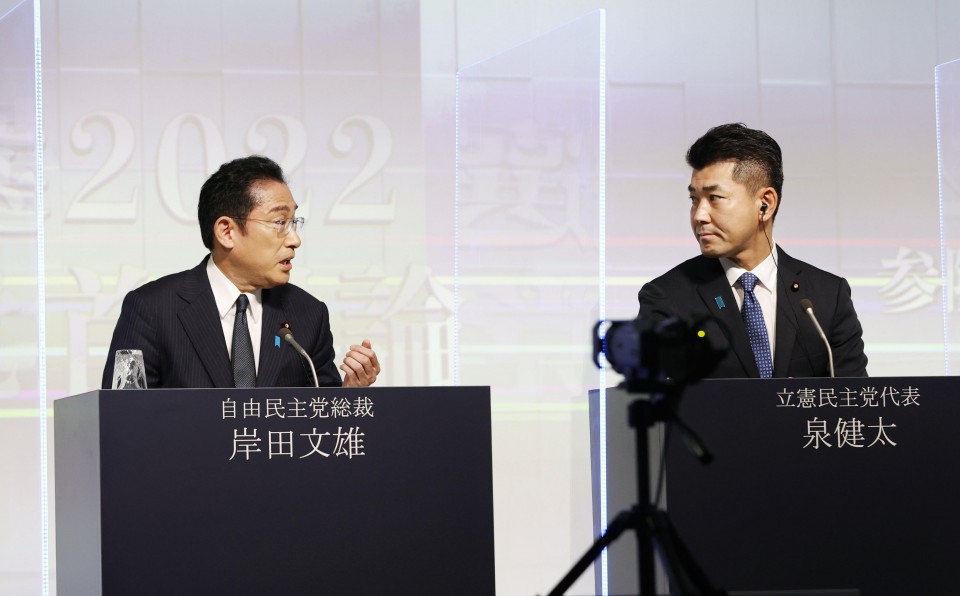 The debate was held among nine party heads as Japan's regular parliamentary session ended Wednesday, effectively marking the start of campaigning for the House of Councillors election at a time when the country faces a weaker yen and rising prices exacerbated by the Russian war in Ukraine. The official campaigning is set to begin Wednesday.

On Friday, the BOJ decided to maintain short-term interest rates at minus 0.1 percent and continue guiding 10-year Japanese government bond yields around zero percent, unfazed by the prospect of further yen weakness as it lags far behind major peers, who are forging ahead with rate hikes to fight inflation.

As the debate session highlighted the LDP's plan to revise Japan's pacifist Constitution, including a mention of the Self-Defense Forces, Kishida said such changes should be made swiftly but did not specify a deadline.

"We must create an occasion for the people to make their choice without taking too much time," said Kishida, adding it is important to include the SDF in the Constitution to put an end to the debate on whether they are Constitutional or not.

Ichiro Matsui, leader of the Japan Innovation Party, urged Kishida to set a specific timeline for revising the Constitution.

Regarding the consumption tax, Kazuo Shii, head of the Japanese Communist Party, called for lowering it to 5 percent to prop up consumer spending amid price increases.

Reiwa Shinsengumi's leader, Taro Yamamoto, said the tax should be scrapped, while the Social Democratic Party's Mizuho Fukushima said it should be paused for three years.